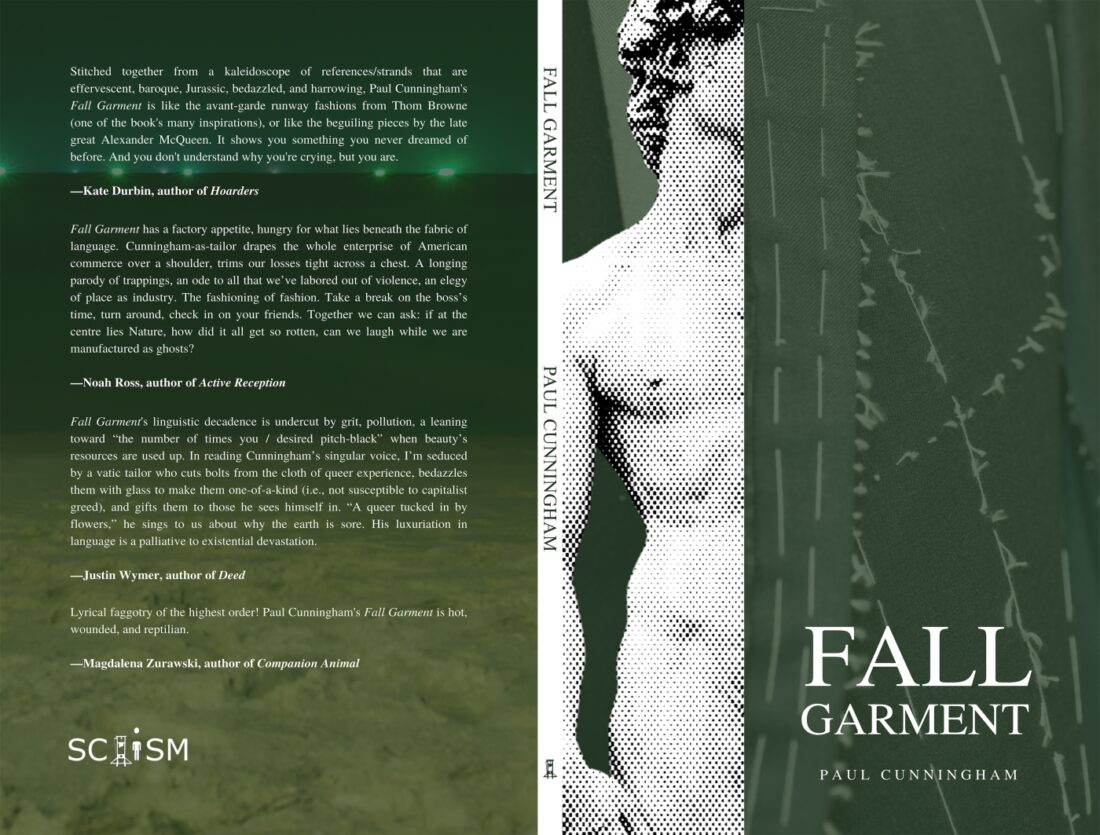 How many metaphors are made between writing and the creation of clothing?  Social fabric, spinning a yarn, the weave of the text, stitching poetics—they seem as numerous and generic as the mounds of clothes in the “fashion graveyard” in the Atacama desert of Chile.  These metaphors illustrate a clean relation of identity and creation, of selfhood donned.

FALL GARMENT (Schism 2022), a new book from poet-translator Paul Cunningham, takes the deep ties between language and fabric and casts them into the sluices of American psychosexual consumption and production. Within, a parabolic economy of poetic description, identity, style, fashion, and waste takes the form of a literal and symbolic factory. While Cunningham’s previous book THE HOUSE OF THE TREE OF SORES (Schism 2020) was a neurotic outpouring of Artaud-like stream of consciousness about artificiality and multilingualism (Cunningham is a managing editor at Action Books), FALL GARMENT is explosive in syntax, skillful in repetitions, and intentional in measure.

The first of three sections, “Factory Appetite” shows how industry wears the town of the speaker’s upbringing. The factor is the harbinger of a delirious fantasy of failed production that illuminates the landscape with “factory fires.” A series of inversions of popular phrases and brands are pocked by a confessional that clamors a queer Jeremiad. The symbolist/decadent desire to illuminate the world in the spotlight of desire, to forefront apprehension, to dress the city in rubies and emeralds and amethysts glow (Douglas) is revived but the illumination comes from factory fires and camera flashes exposing a barren excess and an inability to perform the perceptive transfer of subjectivity onto the landscape: “he ought to map/his eyes in the gloom.”

This section moves through a series of correspondences that take Cunningham’s translator’s familiarity with polysemantics to recast the relationship between production and writing. He writes:

“An army of models, the needle’s

The models are at once the serial reproductions of the factory, the endless stream of same-faced people and styles, but also the dejected, the used, the gazed upon: “the run(a)way is wet like a mirror/with hard and hi-res bodies.” If an economy exists between the garment and the text it is riddled with dead ends, simulacra, and death. Luxury becomes a venue for the insanity of beauty as elegance becomes lurid and the butterfly, paragon of beauty, is “hungry for our salty piss.”

Cunningham’s symbols are constantly being sucked into the matrix of the production and spectacle he creates. “ It takes a disaster’s ashes/to sky a town with new birds” he writes before they are captured in “embroideries of birds” and “drowning in an hourglass jacket.” The factory becomes a psychic mechanism; the poem is forced to perform its subject; and like in Baudelaire there is an iridescent wonder that abounds within the horror: “in intarsia, what have we carved from/all the violence of this world.”

The amount of layering of symbols through repetitions and polysemous transmutations is almost painful, and no amount of fabric can keep us from the cold heart of this poetry at it gazes at a blasted landscape that continues to put on its rouge, saccharine and insatiable.

In the second section, “Sic Ark”—an erasure poem of Critchon’s Jurassic Park novel—Cunningham peels back the symbolic and chronological layers of the AIDs crisis. Laced with urgency, the stanzas are slim and short making the poems come on fast, fast, fast and in dire fashion. Here, Cunningham turns the spigot on high. Footnotes give historical dates relating to the AIDs crisis in reverse, alongside notes about the infamous ark recreation in Grant County, Kentucky. Chasing the ark of a rainbow, with its social and biblical connotations crossed and crackling, the poem too acts like an ark, carrying the reader through the strata of language, pausing on reptiles, amber-trapped fossils, and genetics. Cunningham asks what’s preserved and what’s lost, and the poem becomes amber as well, a natural and beautiful foil to the ark as extinction rears its head alongside sickness: “it was Triassic time/so sic so/ tri ass.” Interspersed with apostrophic, italicized phrases that conjure the phone-time whispers of the afraid, a mass lingers in the space between symbols, a space that might as well be a million years, the space of fear: “we’re running out of time/disease brought/years of research and/the world knew almost nothing/ about dinosaurs.”

The final section, “Fall Garment” returns to questions of waste and perception, with a more prose-laden entry poem “Largo” beginning with a narrator having “a beach in mind.” The narrator is both the trash and the trash picker; everything is disarticulation and uselessness, the body is trash and bone, and the scene is set by the financial hues of red and green.

“A fall hour where money inwards on the red. My beach body emerges from the sand and the focus should be the limbs. Decadence is not the whole. My quickline body. The way it goes pop. And greens. And Flaring.”

Thick with questions of representation, the beach scene where the beachgoers are “hard to look at” because “Not enough flame” calls to mind the famous meditation on beauty and it’s incarnation in a young boy illuminated by the sun in Thomas Mann’s Death in Venice; in fact, Tadzio, the object of affection in that story about the decadence of the bourgeois gaze at the edge of empire and pleasure, is named explicitly throughout FALL GARMENT.  But the narrator does not just contemplate beauty, he sinks into it, melting back and forth into trash and kitsch, infecting the slogans and cliches. “When it comes to poetry, I have a factory appetite,” he writes. Where before beauty was caged and trapped by industry, it’s left to run wild here, and the reader almost wants to cheer as the models, the birds, have their say; Cunningham is not content to lounge on the beach contemplating, he gets dirty with the poetry, he gets honest, he lets his figures have their revenge. “Everyone knows there’s nothing more dangerous than a language you can’t understand,” he writes, echoing the sentiments of Action Books editor Johannes Göransson in his work of criticism, Transgressive Circulation.

The embracing of decadence and symbolist tropes moves the scope beyond the usual transgressive avenues. In the latter part of the third section, the syntax sharpens back into tighter verse and a meditation on reliquaries, fashion, pollution, nationalism, and myth skillfully ensues. Magma melts down everything into verse, the poem becomes a factory of style “of urns, relicks/a reliable form of thirst/used against them/knives of iron, wood, and brass/menswear has always/been important.” The ark of Noah appears alongside “vegetable fragments,” Aaron’s olive-rod, and egg shells. All “crumbling to pieces” in a kitschy American sensibility. The garment becomes another signal of being re-inserted into an older form of production as bones are enveloped and spit up, and the pain of the poem as factory reveals the factory of the mind, imagination, poetics that exists under this more transcendental order.

There are so many threads to pull and so many that seem deliciously tangled forever in this collection. Here, symbols are not just things to use, but facets of. We do not wear clothing, as novelist and critic Derek McCormack has said, the clothing wears us; and the same can be said for this collection, where the poems wear the poet, shedding confessions into decadence, the disarticulation of the auto-poetic self into the general economy of the symbol.