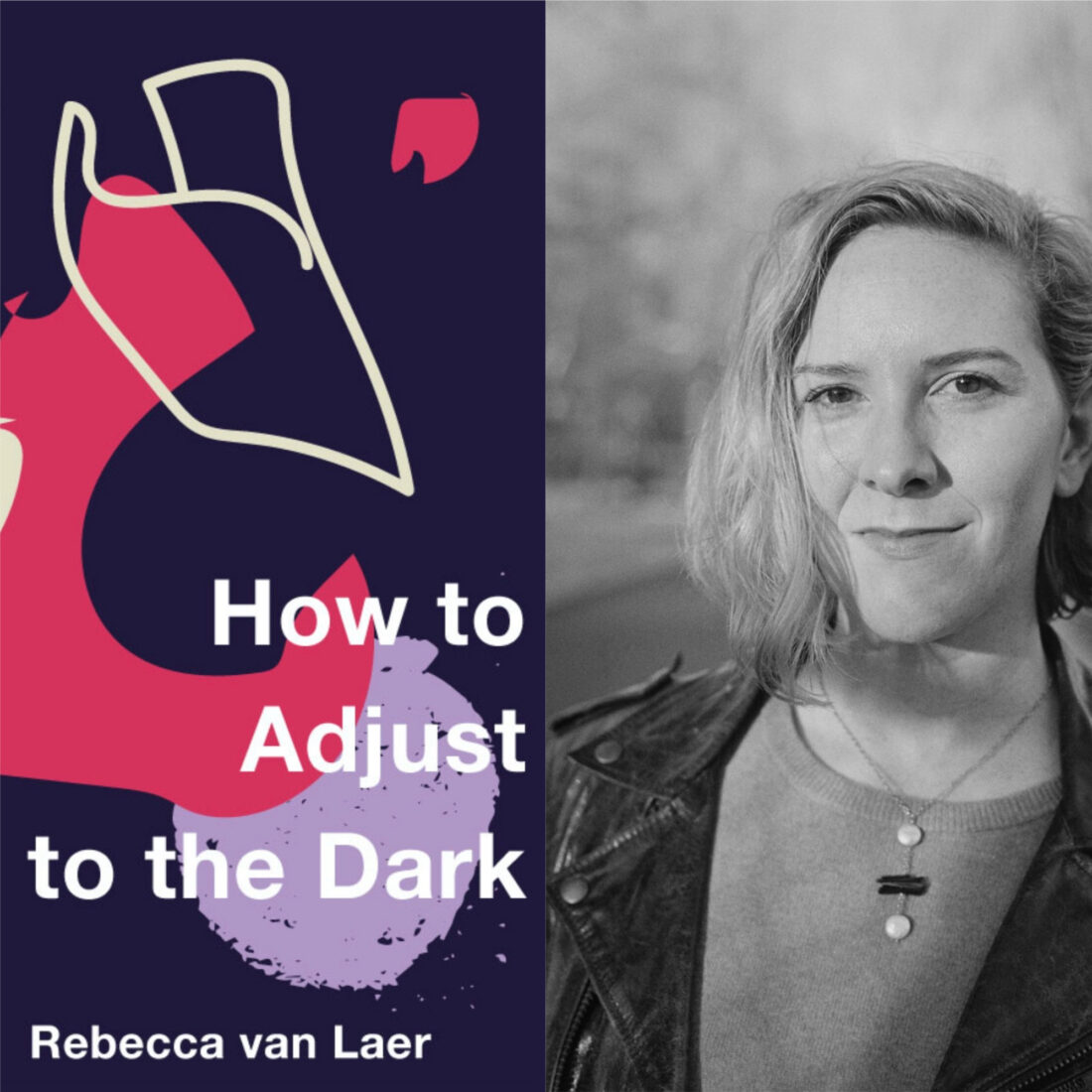 Find the Shard of Beauty: An Interview with Rebecca van Laer

Rebecca van Laer’s debut novella How to Adjust to the Dark (Long Day Press, 2022) is a hybrid of prose, poetry, and theory, drawing on the psychoanalytic tradition of autoanalysis. The text follows Charlotte, a poet, as she reexamines the selves she put on and discarded throughout her early twenties. Told through Charlotte’s reading of her own poems, as well as an investigation of the possibilities of not writing, How to Adjust to the Dark shows us how to join the aesthetic experience to the critical gaze, and what questions might arise when the two come together.

I spoke to Rebecca about the incoherence of the self, whether all writers are cursed, and men who like to tell women what their poems are about.

Diana: How to Adjust to the Dark  begins with a fortune cookie, and like any fortune, the message is more about the past than about the future: “All men should try to learn before they die / What they are running from and to and why.” Can you talk about why you chose to begin with this couplet?

Rebecca: So this did come from a real fortune cookie. This was a point in time before we really knew what Instagram was for, when people were still very much posting breakfast photos and the like. Part of my Instagram at that point was the fortunes that I would get at this divey Thai restaurant in Providence. I knew that many of the kinds of mass-produced horoscopes or fortunes are meant to cast as broad a net as possible, so as to plausibly unlock something—to feel personal.

This one worked on me and called out to me, specifically because it was a heroic couplet, and I’d never seen that before. It seemed like a perfect invitation to think about or explore the medium of verse. In a way, it was an authentic and genuine beginning to the book—but the knowledge that a fortune is made for consumption, mass produced, and part of a bigger structure was also something that I wanted to explore. Anything that seems like a personal sign to you may be universal, in a way, too. So in thinking about the book, in which the narrator Charlotte might seem a bit narcissistic, that fortune cookie also locates it in the idea that everyone is looking for a way to begin their own search toward meaning.

Diana: Then Charlotte turns her interpretive powers on her own poetry. Each chapter includes the full text of one or more of Charlotte’s poems, paired with her analysis of the text, details about its reception by her friends or lovers or professors, and her critical stance toward them after years have gone by. I thought of it as autocritique, like a special genre of autofiction.

How do you categorize this work, if you do, in terms of genre? What tradition is it a part of, for you, and what other texts is it in conversation with?

Rebecca: I once went to this Rachel Cusk talk where she explained her work as a “confirmation of reality.” I think in a world that can feel so fragmented, our collective experience can feel incoherent enough, and that’s before you even think about the incoherence of the self. Beginning to ground fiction in the semi-stable point of a narrator with some of your own experience can serve that important purpose of a confirmation of reality.

This project begins there—these are my real poems, although the history of their composition doesn’t line up with the events in the novella. Originally, the book had the subtitle A Novel from Poems. What the difference is between this idea of a “novel from life” and “autofiction,” who knows.

Whatever I called it, I was interested in the idea of autoanalysis or autotheory as another way of reaching towards that confirmation or insight into reality. Freud’s theory comes from autoanalysis—it’s at once personal and reaching towards the universal; grounded in “logic” yet legible as a literary text. So for me, the incorporation of analysis and theory felt like a natural starting place for a work that is ultimately a fiction—out of necessity, out of my personal interests, and out of where they took me.

Diana: I love that idea of starting from the text, using the poems as a signpost, especially through the lens of Rachel Cusk. It feels like that’s what she’s doing in the Outline trilogy—there’s the inchoate self of the narrator and then the structured narratives delivered by other characters. Her intelligence operates on those narratives to give other characters the kind of static identity that the narrator refuses for herself.

Rebecca: Yeah, I love those books. I think that the way in which the self is only in relationship to the other is so interesting in the Outline trilogy. In my book, Charlotte’s self is more so only in relation to the stories made up about the self, or reflections on the self—much more than her agency or actions in the world. I think many of us experience ourselves that way, as though whatever we’re doing out there, the way that we interact with others, is just a way of testing that inner experience.

Diana: There’s one point in the book where Charlotte is reading from a novel in verse that she’s writing about the Wizard of Oz, and a guy who attends the reading tells her what the themes of the poem are. He’s like, This is what your poem is about. It’s about abuse, it’s about alcoholism. And she thinks, Where did he see these things? Even as she’s investigating herself and creating a narrative of the changing self through these poems, it’s not as simple as saying, This is about abuse. This is about trauma. There’s a kind of violence done in this limiting of the narrative.

Rebecca: There are places where Charlotte obviously lacks self-understanding and self-knowledge. That moment where the man in the bar sees things that she doesn’t see at all, what he’s saying is limiting, but it also shows the limits of her insight into her own work—which we all experience. I think it’s good if her fallibility as a narrator is built in, since the poems can definitely reveal things about herself and her unconscious to the reader.

But yeah, that genre of guy is the worst.

Diana: My favorite of Charlotte’s poems is “Do You Fear Palindromes, Too?” which is—of course—full of palindromes. She says a great mystery of poetry is that the elements that contribute least to meaning contribute most to feeling, rhyme and palindrome in particular. I wondered if you could talk a bit about how you understand meaning and feeling in relation to poetry, and how those play off each other.

Rebecca: I see this idea float across Twitter every so often, and it relates to certain trends in academic discourse—that we’ve gone too far trying to decode texts, and that we’ve lost sense of the pleasure of reading. And rhyme and meter are something that can really strike a chord in you. The aesthetic experience of the first impression feels so resonant, and of course that feeling has its own meaning and is significant and important.

I don’t think it’s necessarily wrong that people think this is opposed to critical analysis. Sometimes interpretation can reinforce that original feeling, give it more beauty and depth and complexity. Other times it can reveal a misunderstanding. But the colder analytic gaze can evacuate that feeling. The two can have a complicated relationship to each other, the aesthetic versus the critical. When I’m trying not to write too much analysis, it’s because I don’t want the text as a whole to lose whatever emotional resonance the reader might feel from the poems or from Charlotte.

Diana: Also on that poem—her writing instructor tells her after reading it that she should be a writer. And Charlotte says that that experience transformed her, not yet into a writer, but into a person who believed she was a writer. Then she says that that’s a curse. What’s the difference between institutional approval and a curse?

Rebecca: Institutional approval is such a double-edged sword. Writing within formal structures sets you up for success within traditional forums for publication. And that can be great, but maybe it’s a curse too, because of the way that it limits your ability to make discoveries for yourself and to find your own criteria for value.

I also would borderline say that all writers are cursed, but it’s so clear to me that not everyone feels that way. I think some people have more fun with it than I do. But I think for me, the compulsion to do this thing that can often be painful and disappointing and that most people don’t care about does sometimes feel like a curse.

Rebecca: This might need fact checking, but I think basically, creative writing workshops have this institutional history, starting mid–20th century, which coincides with the popularization of talk therapy as derived from psychoanalysis. There’s an obsession with the child, like, Write what you know, you have everything you need. Alongside that, there’s the compulsion to create a narrative of the self that unfolds as a journey of healing. So I think that both academic institutions and the industry of self-help and self-care can urge or encourage the embrace of the same kind of narratives.

A lot of readers find my book to be a hopeful book of a journey toward healing. And I wanted a degree of that, of narrative closure, but my intention was to leave it more open than that. To not resolve the questions about what that means for Charlotte and her writing, or what writing does and is for more generally. So it ends with a bunch of questions.

Diana: Charlotte ends up cutting down certain poems she finds “melodramatic” into couplets—but she can’t get rid of those couplets, the remnants. I’m interested in how you thought about that impulse to preserve but modify, to create this archive of “a pain that I couldn’t discard,” romantic suffering she can’t quite look at directly but still wants to keep.

Rebecca: I think that’s the whole book, right? Those couplets are the best illustration of it. The couplets are shards, where all the bad stuff has been cut away. They’re incomplete, but in a way perfect in their contained form. They represent the impulse to take the core of an ugly thing and to find the shard of beauty in it and make something of that. But then, of course, the couplets don’t work, because the bad part that surrounds it is an essential part of the meaning. That’s what the narrative provides, ultimately, that the couplets can’t.

Rebecca van Laer’s writing appears in TriQuarterly, Joyland, Columbia Journal, The Florida Review, Salamander, Hobart, Monkeybicycle, the Ploughshares blog, Electric Literature, and elsewhere. She holds a PhD in English from Brown University, where she studied queer and feminist autobiography. She lives in the Hudson Valley.