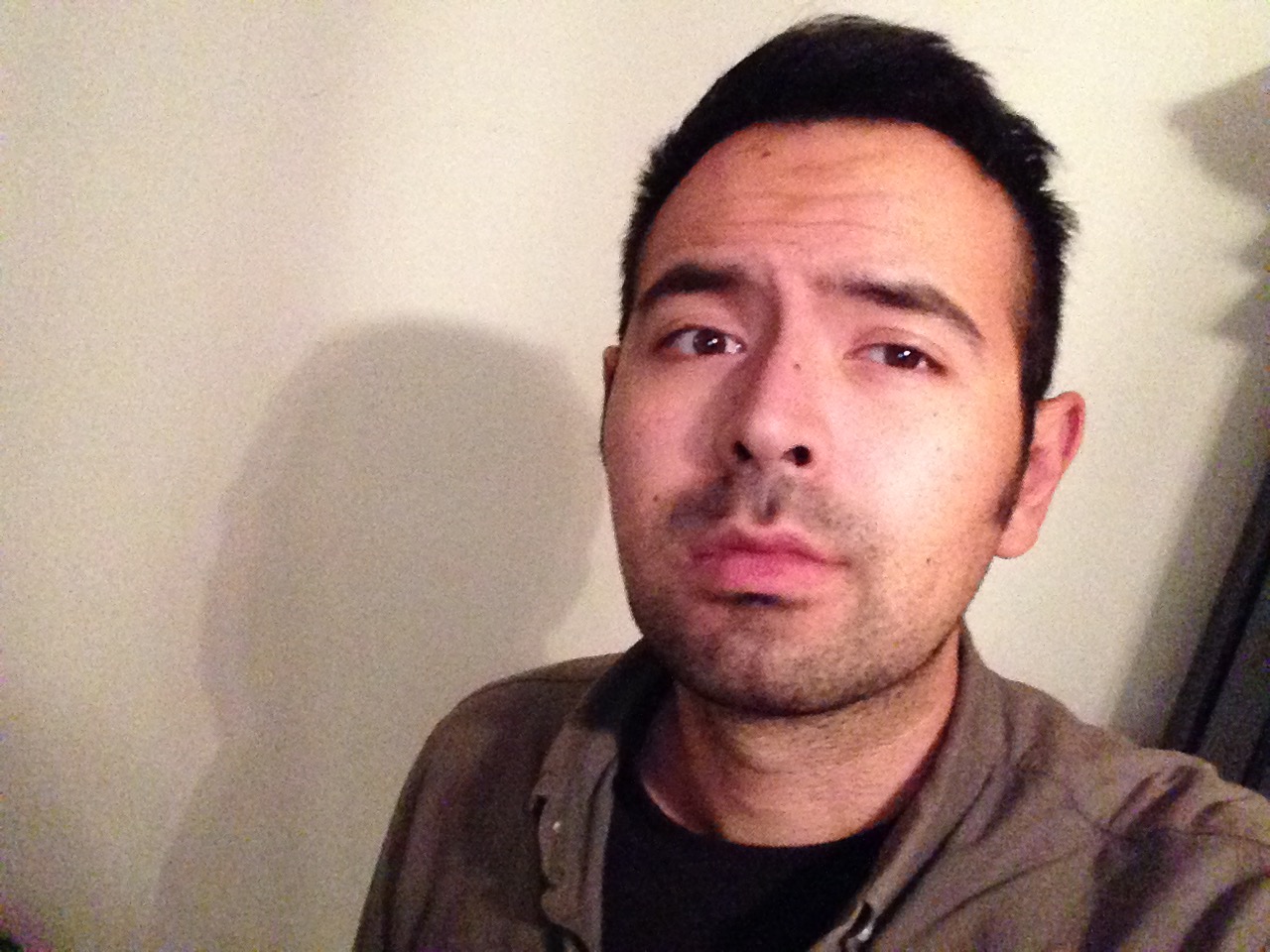 Bob Schofield is the author and illustrator of The Inevitable June, Moon Facts, and Man Bites Cloud. He lives in Rotterdam. He likes what words and pictures do. He wants to be a ghostly presence in your life. Find him at bobschofield.tumblr.com and @anothertower.

I believe it’s so so important that the reader be respected. They’ve chosen to give you their time, and you don’t want to waste it.

You are currently living in the Netherlands, which is far from your usual New Orleans or Philly. How  do you feel this change of location has impacted your creativity?

I think it has mostly changed things for the better. In between Holland and Philly I lived with my parents for awhile, just outside Baltimore, getting all my stuff together in preparation for the move abroad. That was a pretty rough time for me, creatively speaking. I hit a wall. Hit it pretty hard. I found it difficult to work on much of anything, and I lost a lot of creative momentum during that time. It taught me how important productivity is for my mental well-being, and coming here to the Netherlands has been a big step up from that. I’m in school, but I have more space, more alone time, both of which are vital to me. Also the weather’s really nice here. That cold air just helps me think.

With the ending of theEEEL and theNewerYork Press, where does that leave your book The Inevitable June? How does this impact your own personal relationship with your book and how you approach it?

Oh wow so in answering this question I just Googled The Inevitable June and it’s currently on Amazon Kindle Unlimited. So I guess it leaves it widely accessible and free? Which is kind of fucking rad??

In any case, I think I’ve always had a weird relationship with the things I make. Certainly once the creative process is over I feel a lot of detachment. Like a weird bird or sea turtle or something. I’ve pushed it out and now it’s on to the next thing.

Like I remember when I got my box of author copies of The Inevitable June. On the one hand it was an undeniably cool moment. There’s no question it felt good to tear that sucker open, and see a whole bunch of real life versions of something I made with my head and my hands. But at the same time there was this distance. The text was a year old. I was already deep into work on something else entirely. New set of ideas and concerns. I was proud of myself, no doubt. And the book was such a beautiful nugget of design, thanks to the work tNY did. But all the same, I was aware of some sort of vague anticlimax. And I think for me that’s about what my priorities are, what I get out of the process. It’s in the actual work that you find the real juice, in my opinion. It’s only when you’re thinking hard and making something that you can lose sight of your ego, and arrive at a real sense fulfillment.

So my embarrassing secret confession is I don’t actually give a shit about the moon. I just like it as a word. It looks pretty on paper. It has a nice sound, one that rolls from your mouth in a satisfying manner. And so it’s the word not the thing that really matters.

Though I do like the idea of bright, barren fields of white beneath inky skies.

In its original form Moon Facts started when I was still making webcomics. I was doing this longer comic called Moon Sleep. I had this idea that in between each comic I’d post a little haiku-ish poem about the moon. I called them “Moon Facts.” In the end people seemed to like the poems more than the comics. Something that was cool about this time was that I had zero idea what I was doing. I just responded instinctively to feedback. People seemed to like the writing, so I focused more on the writing. I began thinking more about poetry. Thinking about how it has certain similarities to comics, how the two can possibly be woven together. It got me actually writing poetry for the first time since college, and led me straight into the whole online lit scene. And a few years later, when I saw Nostrovia’s chapbook contest I decided to revisit the Moon Facts, ditching the faux-haiku vibe for something a little broader. Little more flexible. In both this and The Inevitable June I relied a lot on patterns to give the appearance of structure, as well as sequential titles to create an illusion of coherence and linear progression.

Your writing somehow holds onto the surreal and the real with both hands, such immense imagery that describes things often simple and relatable. Why do you think this is? What influenced this aspect of your writing?

I believe it’s so so important that the reader be respected. They’ve chosen to give you their time, and you don’t want to waste it. It’s easy for people who are writing weird stuff to push it too far, make it too aggressively strange. But when you do that all you’re left with is word soup. You might as well just press a button on a random word generator. Might as well be playing Mad Libs.

I learned this from video games, funny enough. In good game design you have to challenge the player, but still allow them to progress. In a game, there’s a sweet spot somewhere between bored and frustrated, in which the player’s fully engaged. I think writing works in a similar way.

The trick is to walk in that in between space, where the line or image is familiar, but not in any way you can articulate. When done well, the effect is like greeting the world all over again. Meeting it from a unique, slightly slanted perspective. Everything old is new. Shit starts to breathe and glisten. Your brain receives this tender zap of recognition, and grows a tiny, sublime pair of wings.

You’ve really embraced the ebook. How is this medium better than print, yet also what is it lacking comparatively?

It’s faster. Easier to put together. I have much more control over the end product. At the same time, it’s all just floating on the screen. It lacks weight. Tangibility. And I think especially in the case of work that involves illustrations, tangibility is crucial. I’ll read words off a screen, but for some reason with illustrations I need to see them alive on the page. So it’s a give and take between the two, for sure.

If you could be any of your cartoons, which one would you be?

Probably this sad little goofball, out there enjoying the beach: 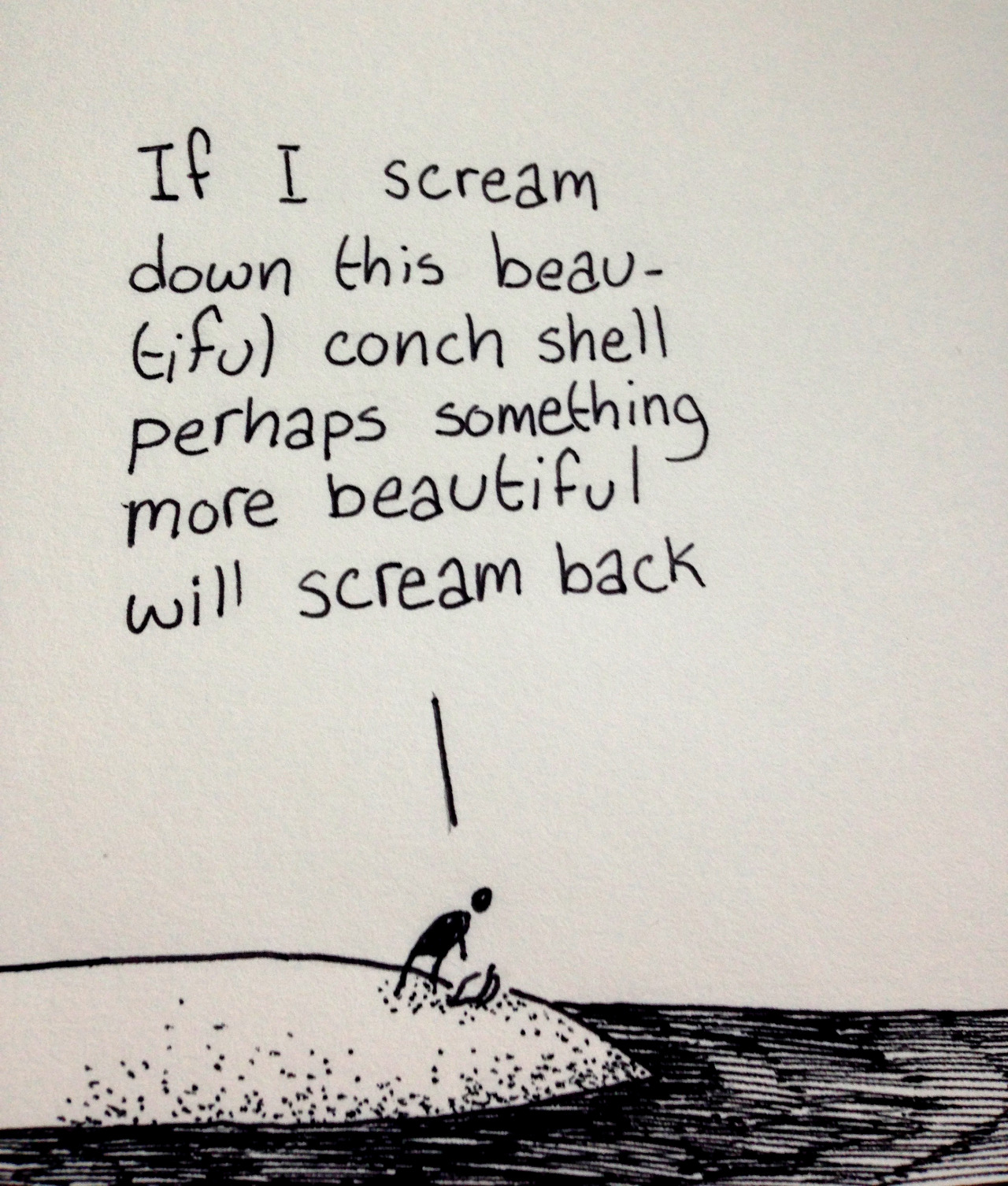 When I come back for my next life I hope to do so as a whale or beautiful tree.