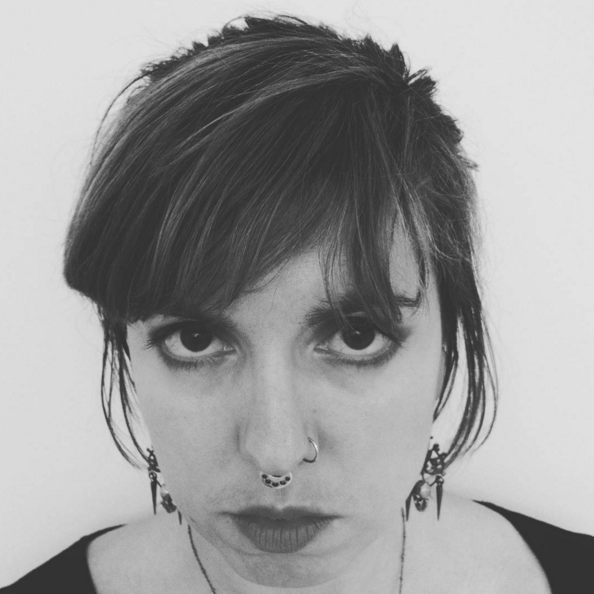 Deconstructing and Destroying: An Interview with Sonya Vatomsky

Sonya Vatomsky’s first full length collection of poems, Salt is for Curing, will be published this month, so we took the opportunity to ask some questions about it—its witchiness, its earthiness, and all its literal exorcisms.

What kinds of thematic threads run through the poems in Salt is for Curing?

Oh, well, there’s definitely a lot of food in there, but it’s not really about food. Things occur as motifs: teeth, dill – salt obviously. And women, and bodies, and autonomy, and trauma, and power. But at the very root of it, it’s me exorcising my demons – literal demons, literal exorcisms – while making people think they’re reading a witchy little book of folklore.

Something that I really admire about your writing is the way you use parts of the body in strange and interesting ways—I’m thinking particularly about the burning eyelashes in “Dame à la Capuche” and the marrow in “Дача.” How are body parts important to your poems?

Thank you! I was particularly obsessed with the body while writing those poems – specifically with the idea of body-horror as a genre and with the destruction of the body, the body made meat. A lot of the book was coming from this very female place, which is where I was at the time, and I wanted to work with violence to the female body* without sexualizing it or othering it – making meat of the body in a cooking way, a drawing-power-from-the-hearth kind of way. Making nourishment of myself.

*And by “female body” I mean specifically my body, though through poetry it gets sublimated into something that includes women and/or people assigned “female” at birth and/or people perceived as female… basically anyone who has experienced, to any degree, the weight of what it means to physically navigate a patriarchal world.

What was the process of collecting poems for Salt is for Curing like? How was it different from putting together My Heart in Aspic?

Well, I wrote both of them fairly quickly. Or in a short period of time is maybe more accurate. I think the oldest poem in both books is from late November or early December of 2014, and then I started sending Aspic out that December. Salt I finished at the very end of May. It’s all talking to a very specific point in my life, so that timeline made sense for me. Otherwise, the difference is mostly in breadth and, yknow, actual quantity of poems. I put all of the Aspic poems in Salt because I still felt very strongly about all of them, so they’re not companions so much as Salt is like a trilogy set and Aspic is its first book – though that metaphor doesn’t really work because poetry isn’t linear like that.

Did you have a poem in Salt is for Curing that was particularly difficult to write, or one that surprised you particularly?

Oh, they’re all difficult. They are very intense little poems. As far as surprise goes, I’m more surprised by which poems tend to resonate the most with people. The one I’ve gotten the most positive feedback on is maybe my least favorite of the bunch, and that’s always curious and weird.

Why poems? Why not another kind of writing?

I do other writing as well, but I’m interested in myself quite a lot, and like using art as a way to dissect and pick at that, so creative nonfiction and poetry tend to be the most useful formats. I think I prefer poetry to creative nonfiction because it’s a little more secretive. Like moon runes, or something, where you have to be in this specific place at a specific time of year with the moon at a specific fullness for the meaning to show up – so it’s enjoyable literature in daylight but for some people all of the words will sync up and glow and be potent and mind-blowing.

Russia turns up in your poetry fairly frequently. What does Russia mean to you?

I was born there, and lived there till I was six, so it’s a lot of my experience – first being Russian, then being a Russian immigrant, then being an American with this kind of hidden second life of different languages and food and traditions. Being Russian was something I experienced a lot of harassment around until maybe the second or third year of high-school, and harassment’s a thing that can make you defiantly cling to a part of your identity in a way you might not have otherwise. So it’s evocative of my childhood, which was the time before I let my life and choices and whatever get really swept up by the current of depression and anxiety, so it’s a good metaphorical (or literal?) stand-in for my authentic self.

When does a poem feel finished to you?

Do you listen to music when you write?

Well, one of the medications I take makes my ears ring constantly, so sort of. But intentionally, no. And not when I read, either – mostly I’ll only listen to music when I’m doing something more tactile and less cerebral, like cooking or yoga or whatever.

If you could redefine “maudlin” what would you make it mean?

I just looked up the etymology of “maudlin,” and apparently it’s descended (through French) from Magdalene, like, Mary’s tears, Mary crying, sadness, and so on, which is something I did not know and would not have guessed. My tendency with incorrectly defining words is towards pulling roots from incorrect linguistic sources, so here I’m thinking of maedl/maedchen in German, which means girl – where we get the word “maid,” “maiden” etc. The vowels are off, but German is pretty into vowel shifts so maybe it could have worked out, in another universe. I know that’s not exactly redefining, but I’m more into deconstructing and destroying than making, in a way.

Sonya Vatomsky is a Moscow-born, Seattle-raised ghost and the author of poetry collection Salt is for Curing (Sator Press) and chapbook My Heart in Aspic (Porkbelly Press). They are an asst. editor at Fruita Pulp, where they also review poetry. Find them by saying their name five times in front of a bathroom mirror or at sonyavatomsky.tumblr.com

You can get Salt is for Curing from Sator Press HERE.