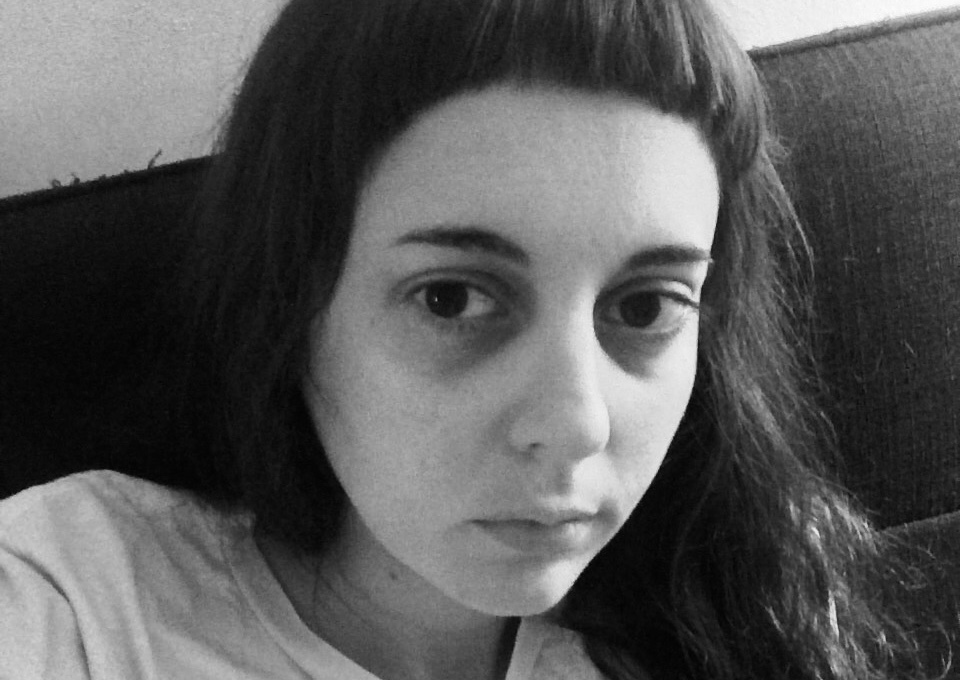 The Question of You with Laura Theobald

Laura Theobald is the author of What My Hair Says About You (Metatron, 2016) and three chapbooks of poetry: Edna Poems (Lame House, 2016), The Best Thing Ever (Boost House, 2015), and eraser poems (h-ngm-n, 2014). She’s a recent MFA graduate from LSU, a freelance editor and book designer, and a book designer for BOAAT. She lives in New Orleans. @lidleida // lauratheobald.net

I love these poems because of how angry they are, and how funny sometimes—how they deal with pain.

Your book What My Hair Says About You is your first full length collection of poetry. Did you intend for it to be a full length when you began writing it? What was your process?

Hi. Thanks for inviting me to do this.

I’ve been working towards a book of poetry semi-consciously since I first figured out that writing a book was possible for someone like me, for a regular person: that was around like 2009, when I started undergrad. That was my first experience meeting poets who were active and publishing—or the first time I became aware that there was “a scene” to be active in. I was really lucky to have that, and to have friends who were excited about writing and getting involved. One of the people I was in school with is Derrick Austin, who also published his first book (Trouble the Water) this year. He’s an amazing writer, and really smart, and knows a tremendous lot about poetry. Having friends like him helped me feel like these kinds of things—like writing a book, or just being “serious” about poetry—were possible or worthwhile. So I’ve been working steadily towards it, but I didn’t embark on this book with the concept of “this is a book.” WMHSAY is really a collection in the traditional sense, of poems I’ve written over the years—since that time, since undergrad. Some of them are recycled versions of poems that are even older.

My next collection, the one I’m working on now, is the first time I’ve begun with the explicit purpose of writing a book of poetry, and it feels different.

It’s great to finally have these poems (in WMHSAY) together, and have them reflect these different periods of my life, and all this time spent thinking about poetry, and feeling things. But the poems are all pretty much centered on this one relationship I was in—a relationship that lasted almost eight years—so they have that connective tissue.

The poems in WMHSAY often refer to a “you”. Is this directed at one singular person or more a conglomeration of various people that you have loved and cared for?

Yeah, so there’s that “you” of the guy from the eight-year relationship. I’d say the book is like 90 percent about that “you.” But sometimes the “you” is other people. A thing happens like you say, I think for a lot of writers, where your feelings about one person or event, or a lot of people and events, meld into this “other” that becomes the a “you” that you can kind of take everything out on, take out all your frustrations on, and love on, and feel things towards, and address.

Coincidentally (or probably not) the collection I’m working on now deals a lot more self-consciously with the idea of a “you” that’s made up of a bunch of people. It’s called Imaginary conversation in which you are a flock of birds. I was writing this manuscript while I was finishing WMHSAY. It’s pretty much finished.

How do you feel like WMHSAY relates to your chaps? How has your writing changed?

The chapbooks were like really easy, fun things that happened while WMHSAY was happening during all those years. Putting WMHSAY together was more difficult in comparison to the chaps. It took a lot of tries to get it right. I had a lot of material to deal with. Even when it was accepted it still needed some work. Ashley Opheim (Founding Editor of Metatron) helped me get them in an order that was easier to read. When you’re working with poems that are 5+ years old, it becomes hard to “see” them anymore, or to imagine someone seeing them for the first time.

But the chapbooks all came really easy, and really fast. It’s like they just knew where to begin, and how to act, and when to be over. So I knew when they were finished and how to present them. I presented them pretty much the way they occurred. I’m thinking of them as like different “fits” I was having. Like “I felt this one way really strongly at this time” And this book is a kind of fit too, but a longer, more sustained one. I will maybe stop calling them “books” or “chapbooks” now and start calling them “fits.”

So it’s maybe not so much how my writing has changed as it is how I’ve changed, or gone through these different episodes. I love these poems because of how angry they are, and how funny sometimes—how they deal with pain.

Your chapbook Eraser Poems reads like an ongoing conversation or a letter. I would love to know more about the process and intent behind Eraser Poems.

I answered some questions about it here: http://h-ngm-n.tumblr.com/post/95468217434/chapbook-questionnaire-laura-theobald. It’s the longest thing I wrote in one sitting. It was an intense fit. I was having a hard time after moving suddenly to Texas, where I didn’t know anyone except my (now) ex. I was feeling detached—from people, from life. So it’s about “erasing”—the feeling being erased—in the sense of disappearing, isolating, feeling bitter and alone with only the internet to console you.

You’ve published with a lot of fantastic independent presses, Metatron especially has published some of my favorite writers. What led you to them?

Definitely. I’ve been really lucky. I started looking at these presses as a fan. I liked the work they were putting out, or the people involved.

Like with Lame House (which is, sadly, no longer putting out new books), I knew Gina Myers from just living in Atlanta for a little while (she’s in Philadelphia now). I started reading her work, and was amazed—particularly by the poems in Hold It Down. So it was a dream when she wrote one day and asked if I had anything she could publish. I was like, “YES! Fuck yeah. Let me find something.” I had these poems that I had published (most of them) on this site BrownGod that’s now defunct, and they became Edna Poems. Lame House is awesome. Gina’s work has, to me, this really “pure” quality that I love—it’s bright, and clear, and direct, and simple, and thoughtful—and then there’s her generosity. The labor of running a press like that singlehandedly, and the way she went about it… It’s really admirable.

With Boost House, I had been following Steve Roggenbuck and his work for years when Boost House started—since he started Internet Poetry, I think. Like everyone, I was blown away by his spirit, and personality, and talent, and humor. He’s done a lot for poetry in a really short time—to bring it to new and younger audiences. I approached him with The Best Thing Ever. I had read with him once in Texas, so I just wrote to him and said, “Hey, I have these poems, would you be interested? I think it could be a good fit for BH.” And he was like “Yeah! It is! We love it!” and I was thrilled. I love all the books they’ve put out and the artists and poets they’ve worked with.

Metatron is actually the one I knew the least about. I don’t remember how I originally came across them or their contest. I was just really ready to get this book out, and looking for places. I wanted to be done with it so I could move on. I had an idea of their aesthetic because I was familiar with Guillaume Morissette, and had read a little bit from some of their authors. I thought I might have a chance. And their books look so good. I’ve been enjoying getting to know them as a press. They seem to really be making things happen in Canada. I’d love to have more of their sprit down here.

So that’s it, I guess. You go towards things you love, and you hope they love you back, and sometimes they do.

If you could go back in time and put a book in the hands of your fifteen year old self, which book would it be?

It wouldn’t have mattered. I didn’t care about books when I was fifteen. I had read The Chronicles of Narnia, and A Midsummer Night’s Dream, weirdly. When I got a little older, I read A Clockwork Orange, Nineteen Eighty-Four, and Julius Caesar. But when I was fifteen pretty much all I cared about was dating boys and doing drugs. But OK: I would give myself The Last 4 Things by Kate Greenstreet, because that was the first book of poetry that made me feel alive.