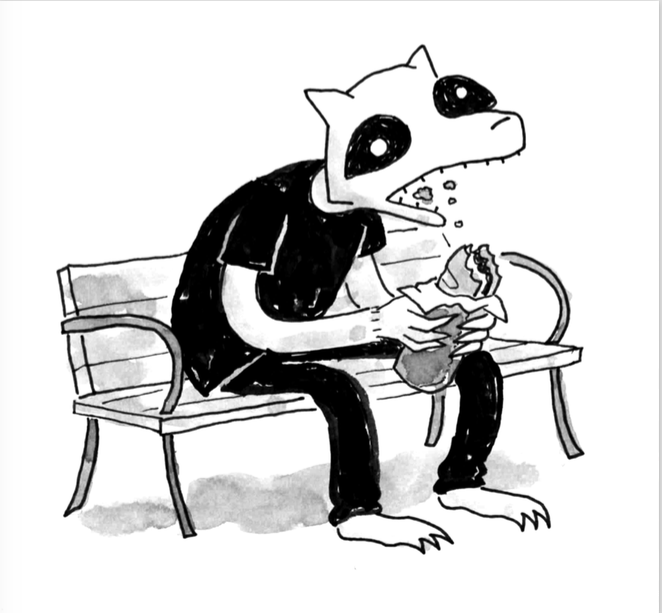 Alex Krokus is an illustrator and animator living in Brooklyn. Check out his latest film with Krystal Downs and follow him on Instagram (@alexkrokus).

I came across your work through a zine my friend bought at the Silent Barn in the beginning of March. On the first page was a note about the time those comics were written, when you were living with eight other people in Bushwick and working in a cheese shop and how you never intended to show anyone these comics. Can you talk more about this period in your life? Do you ever miss it? And what made you decide to eventually publish those comics?

Yeah, I lived in a co-op for about three years after finishing college. When I graduated, I didn’t really try to support myself with my art. I just worked in a cheese shop, ate fancy ham sandwiches, played in a touring folk punk band and chilled hard. I would draw comics from time to time but it was mostly to show my housemates. I did that for a little over two years. I miss it but don’t have much interest in going back to it. You develop a lot of communication skills and nostalgic memories from living with 8 -10 people but it’s also emotionally demanding. Checking in with that many people is a lot of work but you kinda have to be down to do it. Most people get burnt out and eventually leave.
How is your life and working schedule different now than it was then? How have things changed?

Life is pretty different now. I work from home pretty regularly as a freelance animator with two other friends. Sometimes I work on-site in a studio but most of my time is spent at home. I usually draw a comic every couple of days, which I feel I’ve gotten much better at.

Many of your comics center around a longing for simpler or bygone times – the joyousness at being off the grid for a day, or talking to an older man who says even as an adult, he still feels like he “only knows a bunch of children.” What are some of the other themes you try to communicate in your work? What inspires you?

This sounds cliche but I draw a lot of influence from my friends. I’m really happy with the social circle I’ve made for myself so a lot of my recent comics are just trying to capture those “nice moments” in four panels.

Did you always want to become an illustrator and animator?

I’ve been drawing since I was four or five but when I went to art school, I dropped my ambitions of making a career out of it. It looked unrealistic. I wanted to learn animation though so I took an internship after graduating. There, I met my partner Krystal, who was freelancing. She thought the crummy tracing paper animations I was making were cool and encouraged me to quit my cheese shop job and give freelancing a shot. She also encouraged me to make a book of all my comics. Both were good ideas.
Can you talk about your influences? Both artistic and otherwise.
When I was a kid, I watched reruns of “The Simpsons” every day after school which has permanently influenced my humor. I also owned and read every Calvin & Hobbes book, which is probably where my cynicism originated. I eventually went to art school and got a lil pretentious. German Expressionism stuck with me because the drawings were messy and full of character. Since then, I’ve always liked to keep my comics and animations a little unpolished. I think it gives my work a little more energy. Also, I’m lazy.
Tweet
Share
Share
Reddit
Email
WhatsApp
Pin