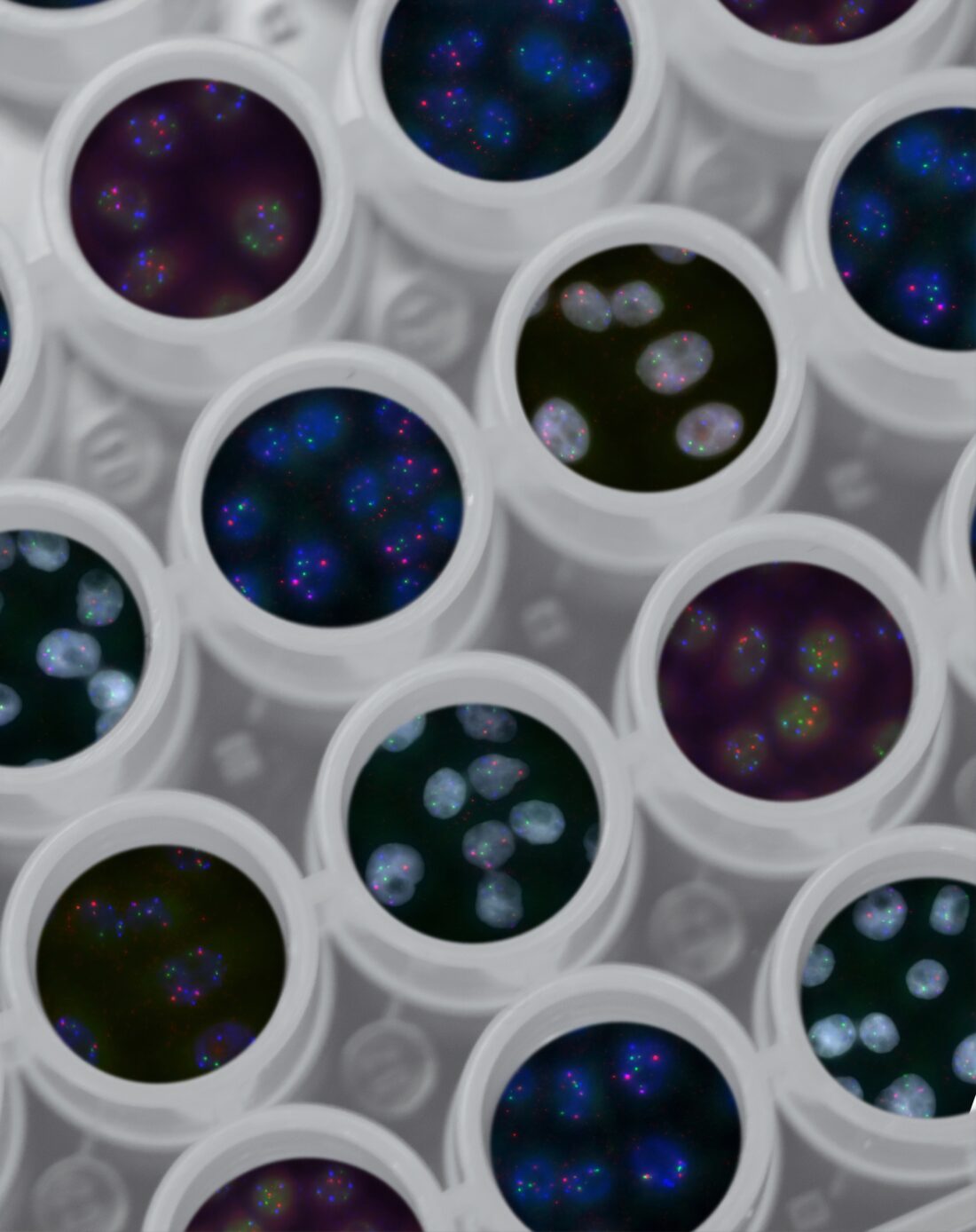 I languished on the scratchy, orange couch of my childhood. Lena, my sister, owned the house. Or, more accurately, she inherited it from our dead parents on the condition that I got to live there too. I didn’t mind being back home. It was better than the crummy apartment I used to sublet. The only problem with the house was that Lena hated me. And she’d just presented me with a gift that proved as much.

“I highly doubt that,” I said.

It was the Saturday before Easter, and our family, the venerable De Lucas, always exchanged presents for some reason. I’d bought Lena a box of coconut-flavored chocolates that I knew she wouldn’t like. She’d got me an ancestry test.

I’d heard about people taking these sorts of tests and finding out they were adopted, that their mom cheated on their dad, that they weren’t actually descended from Thomas Jefferson. All the would-be Jeffersons discovered they were the spawn of some other, lesser progenitor. I didn’t want to be like them. I wanted my family legacy intact.

I didn’t get up, but Lena handed me the kit anyway. Her plan was pretty obvious.

“So, if I’m not your biological sister you’re going to kick me out?”

Lena’s face curled into an expression that I like to call mock shock. “You really think that’s why I got it?” she asked. “You think I’m that diabolical?”

“I got one for myself too, you know.”

“That just reinforces my point.”

Lena grunted out a sound I’d heard many times before, the kind of disdain that only served to encourage me. “You’re impossible,” she said.

I grinned widely enough for Lena to see my teeth. “I noticed you haven’t touched your chocolates. Don’t you like them?”

“Anyway,” Lena said. “Chocolate is bad for your skin. You, of all people, should know that. Are you using the moisturizer I gave you?”

“Of course not,” I said, even though I really should’ve been using it. I had freckles and occasional eczema flare-ups that itched like crazy. I also had red hair. Sunlight was not my friend. I slathered sunscreen all over my pasty skin. This, along with my slim, tall body, set me apart from Lena’s well-proportioned frame, her olive-skin and dark hair—swarthy, some might say, if she were a man. It was evident that she’d be able to birth healthy children. Meanwhile, I boasted the hips of someone whose baby would get the umbilical cord wrapped around its small neck, leading to asphyxia and brain damage. Our family hailed from the bronzed shores of southern Italy. A long-running joke among the De Luca clan was that I must have been switched at birth. Thus the ancestry test.

Lena scrunched up her button nose, which, somehow, instead of making her look weird, made her look adorable. “If you’re too scared about the test, just give it back.”

When she reached for the kit, I clutched it to my chest.

But I could tell she cared. The truth was: I cared too. I wanted to know what was wrong with me.

After Lena left for work, I opened up the kit. I had plenty of time on my hands, having been let go last month from my latest customer retail job. The kit was white on the outside, minimalist save for the name of the company, Blueprint. Inside was a cotton swab and a plastic vial. Per the instructions, I swabbed my inner cheek. I did so in a deliberate, almost clinical manner, swiveling the cotton swab around and around to make sure I didn’t miss a spot. I wanted to get every possible cheek cell. When my inner cheek lost its succulence, growing rough and hard against the cotton, I knew it was time.

Carefully, I placed the cotton swab with my saliva, my DNA, into the vial. I needed to make sure there were no contaminants, that the test was pure and true, that whatever came next was undeniable. Then I mailed the kit back to Blueprint’s lab in California.

A few weeks later, I got an email with the results. I opened the report, learned what it said, then did some follow-up research on the Internet. It was even worse than I’d feared.

Lena and I sat across from each other at our old kitchen table. The surface of the table was dotted with water stains from the cups of our youth. As a kid, I’d refused to use coasters. I took secret pleasure at being the cause of something, to have left my mark.

I made two cups of tea, CalmDown Chamomile, before breaking the news to Lena. The steam from the tea rose up to shroud her face.

“Oh no, Cam,” Lena said, though she didn’t seem too concerned. She took a long, slow sip of tea. I heard it go down her throat.

“What?” Lena asked. She cocked her head, looking at me like I had a forked tongue.

“You’re not a lizard,” she said, as if that settled it.

“What are you talking about?” she asked.

I could tell she was growing frustrated, still unable to grasp the extent of my discovery, that it likely muddied her own pedigree as well.

“Lena, DNA is fact. They use it in criminal cases. The Six-Finger Strangler, you remember him? They had his DNA, matched it in a Persons of Interest database.”

“You don’t need to say anything. But, Lena, this isn’t just about me.”

I waited for Lena to ask who it was about, but she didn’t.

She didn’t say a word.

“Sis,” I said. “This is about our family history. You might be part lizard, too.”

Lena remained silent. She blew on her CalmDown Chamomile and stared at me.

When I reached for my own sip of CalmDown, I noticed a fruit fly had drowned itself in the hot liquid. I wondered about the taste. I wondered if I’d like it.

The next day I bought a bag of live crickets from the pet store. The clerk, who scooped them out of their austere terrarium, wanted to make conversation.

“What animal do you have, if you don’t mind me asking?”

I cradled the bag of crickets, all of them stacked atop one another, a mass of legs and antennae, scrambling around as if suspended in air. “They’re for me,” I said.

“Ah,” he said. “You know, ma’am, crickets don’t make great pets.” He seemed to consider something. “I’ve got a box turtle named Jack,” he said. “We’ve got some box turtles if you’re interested. Smart as heck and they love crickets.”

He didn’t say much after that.

When I got back home, I dumped the crickets onto a plate. They meandered around the white surface, their brown spindly legs tapping on the cold porcelain.

But I couldn’t. I couldn’t bring myself to scarf down a live cricket, to steal the light from its beady black eyes. I’d been told over and over again that insects were gross. They were a sign of disease and rot. They were unsightly pests to be eliminated. Then I realized what my problem was: I’d been culturally indoctrinated against my own ancestral heritage.

No wonder I couldn’t eat a cricket outright. I had to get past my prejudices. So, I came up with a brilliant solution. I’d blend the crickets up and bake them into brownies.

Around midnight, while Lena slept, I went downstairs into the kitchen. I poured the blended-up crickets, rust-colored and grainy, into a glass mixing bowl. Then I added an egg, some flour, melted butter, cocoa powder, and a heaping spoonful of sugar. After whisking, I sifted through the mixture with a fork to see if I could make out any identifiable bits of insect. Of course, my eyes had never been great, so I wasn’t able to make out anything bug-like. Then something else occurred to me. I was the only one in my family that needed glasses, the only one who didn’t have 20-20 vision. That couldn’t have been a coincidence.

Later, as the brownies baked, I confirmed my suspicions with a simple online query. Sure enough, I found out that lizards lack binocular vision, which limits their ability to perceive three-dimensional images of their surroundings. This new evidence left me reeling.            Perhaps, then, my ongoing issues with eczema were simply the result of the scaly, latent DNA of my lizard forbearers. And wasn’t it true that I’d never been the athletic type? Clearly, my particular body structure was ill-equipped for the bipedal running that sport is so reliant on. My differences were not, as I’d always assumed, personal shortcomings. They were related to my lineage. It made me wish my parents had known. Or perhaps they did know, but were too ashamed to let the secret out: we were a family of lizard people.

While I reimagined what my childhood could’ve been like had my condition been made public—reimagined a kinder, more understanding Lena—the cricket brownies baked in the oven. When they were finished, I cut myself a portion. The brownie was warm, smelling of butter and chocolate. One would never suspect its primary ingredient was cricket.

I ate the brownie without hesitation. I felt no disgust. In fact, I preferred this cricket brownie to past non-cricket brownies. There was a bold nuttiness to each bite, a wholesome, earthy flavor. I was now sure of what I’d already guessed. My taste buds were predisposed to enjoy the savory taste of insects. I had no choice but to embrace my reptilian side.

In the afternoon, around lunch time, I held out an offering to Lena.

Lena inspected it, then took a bite. She chewed pensively, furrowing her brow.

“There was a secret ingredient,” I said.

She seemed confused. “Crickets? You mean the insect?”

Ever the drama queen, Lena spat out an unfinished mouthful into her napkin and screwed up her face. “Cam, why would you do this?”

“Well, given that I’m part lizard, I’ve begun to eat crickets,” I explained. “I wanted to share this part of myself with you. I hope you can accept me for who I am.”

I proceeded to eat a brownie of my own in one large gulp. My anxiety had completely disappeared, much like the detachable tail of a skink.

Lena’s mouth hung open. “For the last time, you are not a lizard.”

“You’re denying my heritage,” I said. “Our heritage.”

Lena’s expression changed. She was no longer bewildered. Her olive cheeks grew rosy. Her nostrils flared. Her symmetrical features contorted with resentment.

This was where I had her. I’d been waiting.

“Evolution,” I said. “Ever heard of it? We are all descended from lizards. We are all sisters and brothers if we go back far enough. It just so happens that our inherited lizard genes have expressed themselves in me. Who am I to turn away from them, to repudiate our shared ancestry, this connection between all living things?”

Lena squinted at me, as if she were examining some foreign specimen under the microscope. “I’m going to call the hospital again,” she said.

She went for her phone.

Meanwhile, I made a break for it, scampering out of our house and into the sunlight. I had shown Lena what I was. I liked what I’d shown her. For the first time, I felt comfortable in my skin, my freckled skin. My cherry-red hair glinted in the sun’s rays. The glare of it hurt my eyes, but I did not run from the sun. I basked in its glory, in my glory.