She works at a law firm during the day, attends law school classes at night, and writes during every spare moment in between. She was first published at 16 and her work has been awarded the Carl Cherry Center for the Arts Award. She is the author of two chapbooks, The Deer Longs for Streams of Water, and A Dark, Breathing Heart (forthcoming). Her poems have appeared in The Boiler, Menacing Hedge, Whale Road Review, Hermeneutic Chaos, and others. Though she looks sweet, she has an unhealthy obsession with Hitchcock movies, which is probably why some have called her poetry “unsettling.”

They are a person who writes. Founding Editor of Zoomoozophone Review, Editor-in-Chief of experiential-experimental-literature, and Publicity Director for Gold Wake Press. They are a person who resides in Cleveland Heights, Ohio, where they enjoy writing poems and eating burritos. Their books include yr yr, Blueberry Lemonade, and When Empurpled: An Elegy. They have poems at Sea Foam Mag, Truck, In Between Hangovers, Futures Trading, and X-Peri. They occasionally produce/release experimental music under the name Let’s Fight! And occasionally create/share visual poems via snapchat, (when_empurpled). 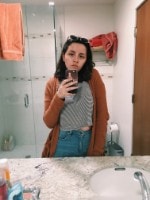 A sleepy Chicana from southern California who enjoys reading texts on revolution and picking fights with people. She is the co-founder and managing editor of Kerosene Magazine and is currently on staff as a social media editor at Ascend Magazine. Her writing explores borderlands, moths, and found families. Her work has appeared in Spy Kids Review, Vagabond City, Wu-Wei Magazine, and elsewhere. When shes not eating carne asada fries, she’s spending time with her puppy Jupiter, roasting her friends, and tweeting about girls and gay subtext in media.