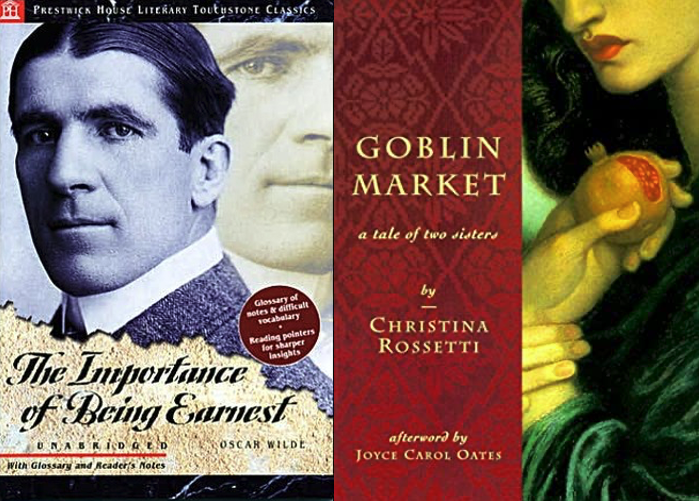 Goblin Market & The Importance of Being Earnest

I think one of the most common metaphors in literature for sexual desire, lust, and emotions of the like is consumption. But I believe that consumption as a metaphor for sexual desires is one that is both effective and revealing. With the two short stories for this week, “Goblin Market” (1862) by Christina Rossetti and “The Importance of Being Earnest” (1895) by Oscar Wilde, Rossetti and Wilde seem to warn readers against acting on desires through their narratives.

“Goblin Market” by Christina Rossetti takes the form of a narrative poem that follows two young girls, Laura and Lizzie, who try to resist the temptation posed by the goblin merchants selling appealing fruits.

“The Important of Being Earnest” by Oscar Wilde presents readers with the characters Algernon Moncrieff and Jack Worthing, with Jack later posing as ‘Ernest’ in attempts to win Cecily’s affection. The story explores the social conventions during Wilde’s time.

Rossetti’s metaphorical poem offers two very different perspectives on the idea of consumption with the first emphasizing the consumerist culture of luxury goods during the 19th century, and the second illustrating the sexual implications of what it means to “come buy” the fruits which we will focus on today. The consumption of the goblin’s fruit symbolizes giving in to the temptations of one’s sexual desires and losing one’s virginity and innocence. The poem emphasizes how, upon the consumption of the fruit, young women lose their marriage appeal because of the importance of chastity during this time. Here, it’s important to note that the goblin merchants only appear during nighttime, which holds implications of a connection between the selling of fruits and the selling of bodies at brothels. Again, this is emphasized by Laura selling parts of her body, such as her hair, for the fruit—a manifestation of her desires, both sexually and materially.

In “The Importance of Being Earnest”, consumption also symbolizes an enactment on one’s sexual desires but also implications concerning the reality of the characters’ sexuality. The consumption of tea-cakes and muffins seems to point readers to the realization that Algernon is homosexual and also brings into question Jack’s sexuality. The consumption of muffins is a metaphor for homosexuality, whereas heterosexuality is presented through the consumption of tea-cakes. It’s important to note that during Wilde’s time, being open about one’s homosexuality is not as common as it is in the current society which makes it that much more significant that Algernon eventually succumbs to his desires and consumes the muffins in the story even after he seduces Cecily, making her fall in love with him even given his lacking interest in individuals of her gender. Through dialogue between Algernon and Jack, we come to better understand the metaphors in use because of how the consumption of muffins is spoken about in the context of the women they are both supposed to be in love with.

Both novels present similar yet different perspectives on the idea of consumption as a metaphor for acting on sexual desires. In the society and time that Rossetti and Wilde lived in, enacting sexual desires is frowned upon rather than celebrated.