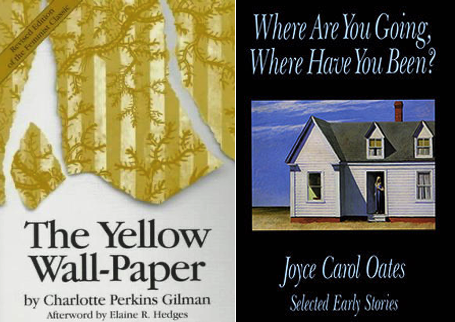 The Yellow Wallpaper & Where Are You Going, Where Have You Been

This week rather than novels, we’ll be taking a look at two different short stories centred around the oppression of the female characters within them. I’ll be taking a look at these two stories in terms of the implications of the domestic sphere in which the female protagonists are trapped by the male characters. In “The Yellow Wallpaper” (1892) by Charlotte Perkins Gilman and “Where Are You Going, Where Have You Been” by (1966) by Joyce Carol Oates, the unnamed narrator and Connie are confined within the domestic space by dominating male characters where the domestic sphere becomes one that is violent rather than comforting, and for both characters, even the public space becomes unwelcoming.

“The Yellow Wallpaper” by Charlotte Perkins Gilman follows an unnamed narrator who is suffering in terms of both her mental and physical health. Her husband, who is a physician, confines her to a nursery room as a means of “treating” what people during that time would consider as “hysteria”.

“Where Are You Going, Where Have You Been” by Joyce Carol Oates is focused on an attractive young woman, Connie, who has a difficult relationship with her mother. She later encounters a man named Arnold Friend, who begins as a mysterious character but later becomes a threat to Connie’s life.

In “The Yellow Wallpaper”, Gilman presents us with a vulnerable narrator who is oppressed by her husband in her mentally ill state. Her husband confines her to the nursery room within a house removed from the public and forbids her from doing anything outside of what is necessary—eating and sleeping. Rather than a safe space, the room soon becomes one that haunts the narrator’s mind as the wallpaper begins to morph. The domestic space, in this case, becomes one that is violent because of how the narrator believes there is a woman trapped within the walls—here we can imply that it is a manifestation of her circumstances—and attempts to free the woman by ripping out the wallpaper. The most interesting event in the story is how the narrator reverses the role of her and her husband by locking the door, keeping her husband out of the private space. She makes this decision out of her free will rather than it being a choice that is coerced by her husband at the end of the narrative.

In terms of “Where Are You Going, Where Have You Been”, the violence of the domestic sphere presents itself when Arnold Friend essentially stalks Connie and approaches her when her family is away. During this encounter, Connie is confined to the kitchen specifically and is rendered voiceless and choice-less. When Connie threatens to call the police, Arnold threatens to enter the house. When Connie says she will lock the door, Arnold says he will break it down. When Connie insists her father will soon return, Arnold tells her he will hurt her family. This is when Connie is given a “choice”: Arnold tells her that as long as she doesn’t touch the phone, he will remain outside. Although this domestic space is “technically” supposed to be safe for Connie because Arnold is outside of it, this space becomes one that is violent because Connie is neither able to escape the space nor is she able to use anything in the space, such as the phone, to defend herself. For Connie, neither the domestic sphere, a place Arnold can easily penetrate, nor the public sphere where Arnold dominates, is safe for her.

These two short stories seem to highlight the lacking safety for women both in the domestic and public spheres, which is an ongoing issue that needs to be addressed. If you know of any stories or novels, both contemporary or long since published, that would work well in conversation with the two talked about today, please leave a comment below!