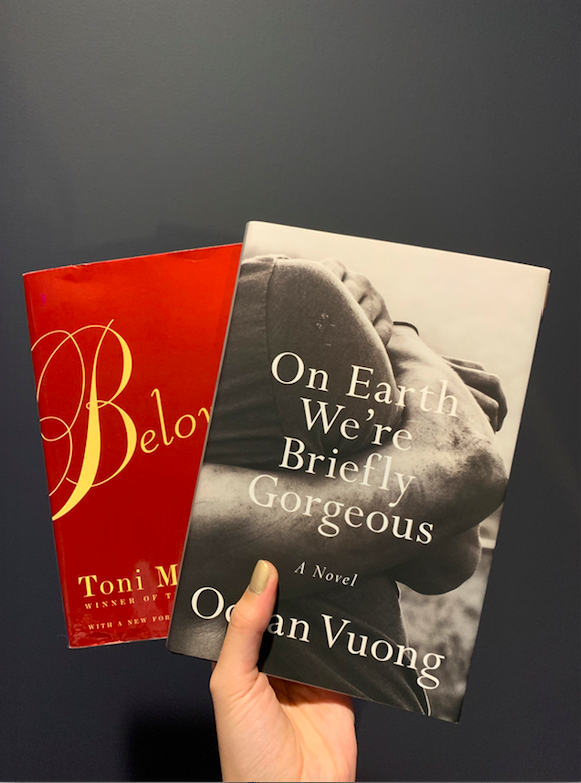 The Transmission of Intergenerational Trauma:

Ocean Vuong’s On Earth We’re Briefly Gorgeous centers on the story of Little Dog, a young Vietnamese American, and his letter to his mother, Rose—a story which draws similarities to Vuong’s real-life experiences and relationship with his mother. Little Dog recounts not only the memories of his life with his mother and grandmother, Lan, but also how his life develops as he explores his sexual identity and the concept of masculinity through his relationship with Trevor.

Toni Morrison’s Beloved follows the story of Sethe, a former slave, and her daughter, Denver, and later in the novel, Paul D, a man who worked on the same plantation—Mr. Garner’s Sweet Home—as Sethe when they were both still enslaved. Throughout the novel, the characters are forced to recall their ‘rememory,’ a term that Morrison uses to redefine the concept of memory and draw a strong connection between the present and the past, through the character Beloved, appearing as manifestations of their past and traumas.

What becomes clear while reading both these novels is the violence of trauma and how trauma transmits intergenerationally, but also how the characters attempt to reconcile with their past and traumas through love and acceptance. In On Earth We’re Briefly Gorgeous, Vuong brings attention to the experiences of both Lan and Rose and how their past traumas influence their character and development in the present. Lan and Rose’s ‘rememory’ causes them to view the present world through lenses of the past, making it very difficult for them to move forward and let go of their traumas. For Little Dog, although he did not directly experience the trauma of his mother and grandmother, they indirectly transmitted their traumas into him through Lan’s re-enactments of the past and Rose’s violence towards Little Dog. Rose and Lan’s memories take the form of intergenerational trauma that weaves into Little Dog’s memory, a past that he cannot escape from or forget even though it is not his own.

On the other hand, Beloved emphasizes the past and traumas of the characters Sethe, Denver, and Paul D through the miraculous appearance of Beloved, who appears as a living ghost of Sethe’s passed daughter. Ultimately, Beloved is the manifestation of not only something that the characters have lost but also traumas and memories that the characters cannot seem to let go. For Sethe, Beloved is a manifestation of the violence, abuse, and rape she experienced during her time on the plantation; for Paul D, Beloved exposes his trauma of emasculation and dehumanization, where not only is his masculinity stripped from him but so is his identity, leaving him with only a single marker of his difference from other slaves—the letter ‘D;’ for Denver, Beloved amplifies the fear that she carries for her mother’s past actions and her desire to prevent a future reoccurrence. Because Beloved represents the future generation, her presence takes the form of an inescapable transmission of intergenerational trauma.

In both novels, not only is the exploration of the idea of intergenerational trauma dominant but the authors also explore racism, culture, sexuality, and the relationship between parent and child. Although the language used by Morrison and Vuong in their novels are both beautiful and heartbreaking, what spoke the loudest was the language of the body of their characters.