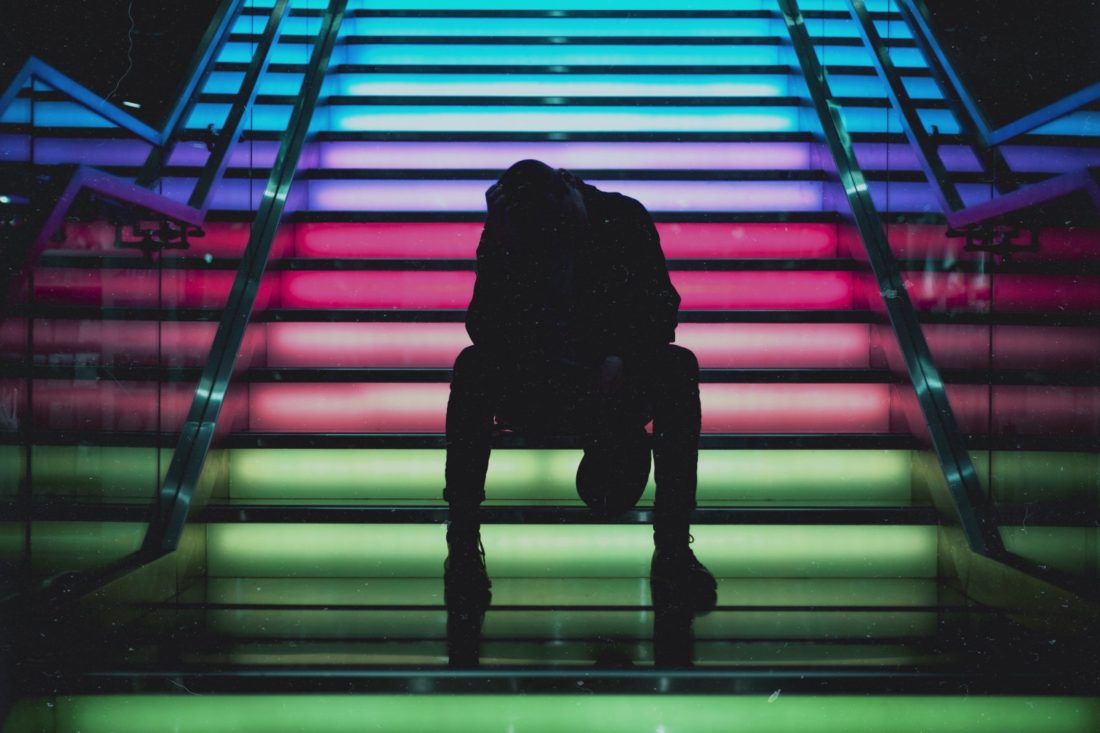 “Vittujen kevät ja kyrpien takatalvi!” written in black marker on a ripped out piece of paper, and stuck to the kitchen wall using blue-tack. “Spring of cunts, and the late winter of dicks”, right above the microwave. Iris and I were so amused by this Finnish profanity when we first heard it from her classmate who was staying with us for a couple of weeks over a dinner of fries and pre-cooked chicken tenders, that we asked her to write it out, so we could look at it every day. The rest of our kitchen was no less absurd. Resting on the microwave was a perpetual flip calendar with a different optical illusion puzzle on every page. We would religiously solve the puzzles each day, desperately grasping for any kind of routine while counting down the days until our flight home. The wobbly wooden dining table was decorated by a single fruit bowl, only occasionally used for storing an apple or two, but most often filled with coins of various currencies, Iris’s Marlboro Lights, and for whatever reason (probably laziness), a pair of pink Cinderella children’s gloves we’d found on one of our Sunday walks to the nearby Whole Foods. Also a remnant from such a promenade is the unused box of cat litter by the patio door, purchased for a cat that followed us home one day. After a week of googling how to determine a cat’s sex, deciding on a name, and being woken to a very liquid, malodorous surprise on the hallway carpet, Cat took mercy on us and ran away.

I’d met Iris three years earlier on the first day of our high school junior year; she was in my philosophy course. However, we would not become close friends until the end of the year class trip, after an overly enthusiastic chat during an all-night bus drive. Iris was lean and long-limbed, with mousy ginger hair and light blue eyes topped by a pair of distractingly thick, dark eyebrows.

I remember seeing photographs of the kitchen on a property letting website while browsing for a place in which we would be spending our second year at Edinburgh University. The ground-floor apartment seemed decent enough – high ceilings, two large bedrooms, well lit, 20-minute walk from campus; but it was the kitchen that truly drew me in. Its light blue walls, white tiles and framed patio doors revealing a wild, very British private garden, gave off a homely, vintage vibe. I’d spent a good part of the summer break getting into baking, and could already smell the shortbread crust tarts cooling on the marble counter. Iris was never fully sold on the apartment, but I had my mind made up – I needed that old lady kitchen realness. Being that she was never the one to take initiative and find an alternative, we settled on my choice. Thus began a year long occupancy which would end with robbery, a dead upstairs neighbor, and would later be referred to as our magical-realism experience. But this is not a story about anything as interesting as that. This is a story about non-events.

Throughout my life, I’d been taught how to play Rummy on at least 3 different occasions. The most recent one happened sitting in said kitchen over cheap Sainsbury’s dark roast, while both Iris and I were procrastinating essay writing. We’d been reading Anais Nin’s US journals at the time, so during what would become her third win of the evening, and after some discussion about the French writer, Iris got to talking about another female author we admired, Isidora Sekulic, and her days spent in Norway. We thought a lot about the two writers. There was something familiar about each of our conditions, we longed for empathetic minds in literary figures if we could not find them in our daily lives. Alone, in a foreign country, pining after the warmth of a more intimate people.

By the time the topic of our regular kitchen conversations predominantly shifted to the Yugoslav civil war, I had already learnt with scientific accuracy how to make the type of black tea Iris most liked. The secret was in the proportion of milk to water, the difficulty was in figuring this out for each type of mug we owned, and the general rule of thumb was two fingers of milk, no sugar, no honey. Also by this time, I had, ironically, given up on preparing the Turkish coffee I had brought from home (it took me less time to pour boiling water from the kettle on instant coffee, than it did to roast it on the stove, waiting for the two obligatory boils in the cezve).

Over English breakfast tea, and simple, traitorous coffee, we had first noticed that South-Eastern Europe hadn’t seen a period of peace lasting longer than 50 years, since the beginning of recorded history. “The problem is, no one gives us time to heal, to lick our wounds”. Sipping the drinks, legs periodically shifting from up on the table, to folded on the chair, to rightly positioned on the floor, we almost matter-of-factly came to terms with the fact that this meant another conflict in our lifetime. It was only a question of whether we would be 29 or 64 by the moment our brothers took arms again.

Under the strikingly artificial yellow light of the perpetually dying bulbs (1 out of 4 still working when we moved out), we took ourselves equally as melodramatically as we did every topic, exaggerating the absurdity of two nineteen year-olds sitting in a spacious early 20th century style kitchen, discussing the war.

Neither of us went out often during our second year in Edinburgh. The times we did decide to go out, and only after convincing ourselves we were to have a wilder night than that guy from Oldham who went out, got drunk and woke up in Paris, it was always with each other, and always to the same pub by the College of Art. We never did wake up in a different European capital, we rarely even met someone new, and we, seemingly as a rule, went home disappointed.

On one such occasion, our night ended in the kitchen – rejoicing after opening the fridge to find a four pack of Guinness, along with three cans of light Gin and Tonic. We had also discovered half a bag of teacakes, and concluded with part desperation, part genuine excitement, that we could not have hoped for a better development of events. Our go-to sad+drunk music were nostalgic Bosnian folk songs. The wailing, melodic female voice, coupled with middle eastern spiced rhythms and the cry of an accordion send the average Balkan native into a state whose only friend is as strong an alcohol as one could find. We were limited to the 5% of the Extra Stout. It did the job as well as any higher percentage, and after some time, my vision was limited to the square metre surrounding Iris. I remember precisely what she was wearing, because upon seeing her in that dress on that day, the inner sixteen-year-old me who first met Iris in our high school classroom, was jealous of the fit. She looked beautiful. A form-fitting maroon, lace dress, with prints of golden flowers and emerald leaves was paired with sheer black tights, and combat boots that reached halfway up her calves. Sitting on the dirty kitchen floor now, she was left only in the dress, having taken of the tights as they were too constricting for a beer and teacake filled belly. It might be that a drunken brain exaggerates the beauty of everything, but Iris, with the remains of the day’s rouge on her lips, smudged black kajal on her waterlines, and a tipsy, dreamy look in her eyes, was a vision. I watched her laugh and shout along to the lyrics which told the story of a woman scorned. During an especially melodic and fast-paced bridge of the song, she had decided to get up from the floor, and start dancing confined to the narrow area between the wooden desk and kitchen counter. I was still seated on my chair, hypnotized by the contrast between the cherry coloured dress and her bare, white legs, as Iris was spinning endlessly. The rhythm was getting quicker, and with it her spinning turned to stumbling, tripping, and then again to a spin, until she finally fell back to the floor, her breath hastened, still laughing.

I watched her in our kitchen, in a strange land which we felt never embraced us, and experienced with her a rare moment of home. A warm memory of hot blooded gypsy dancers, loud men, stuffy air, aching hearts; Tunnock’s teacake wrappers all around us.

One thing never missing from our kitchen cupboards were Quaker Instant Oats. The preferred flavor was Maple & Brown Sugar, and I still have nightmares concerning the two instances in which Iris, never the most attentive person, bought the Original (aka Flavorless) box instead. On especially life-draining days, we would go through at least four oat sachets each. Other than that, and a gradually rotting jar of Ajvar my mother sent me to remind me of home (haha), we never had much food in the kitchen. A normal meal was more of a recurring character, exclusively in the form of take-out. We had our Italian phase, our Noodle box phase, our Indian phase, and for a very bleak period after discovering you can get McDonalds delivered to your apartment – our Chicken McNuggets phase. The Quaker Instant Oats however, were an Iris and Me staple.

One evening, over a hearty dinner of microwaved oatmeal, we decided that we were alright. We’d both had a productive day, went to all our lectures, did the necessary readings, and had at least three pieces of fruit. We felt good about ourselves. There was a motivation in both not felt in a while. I was sincerely excited about writing my analytic philosophy paper, and Iris was sketching out the first ideas for some film project months in advance. “I actually do feel okay today Iris”. She did too, this time, she was honestly enthusiastic about her life here.  “Maybe we can finally go and get those tattoos and go to the farmer’s market on Sunday”. I felt eager to finish our Edinburgh bucket list, now that we were okay. Maybe we could also go to the zoo, and then have crepes on Portobello beach. “Wow, I really, fully, do feel okay today”. I had just finished my bowl of oats. I got up to make another.

People who are honestly okay, don’t need to repeat it that much, I thought as I put my second portion of Instant Quaker Maple & Brown Sugar Oats in the microwave, and set the timer to 2min30sec. “Spring of cunts, and the late winter of dicks”, no kidding.