Shadow of a Man 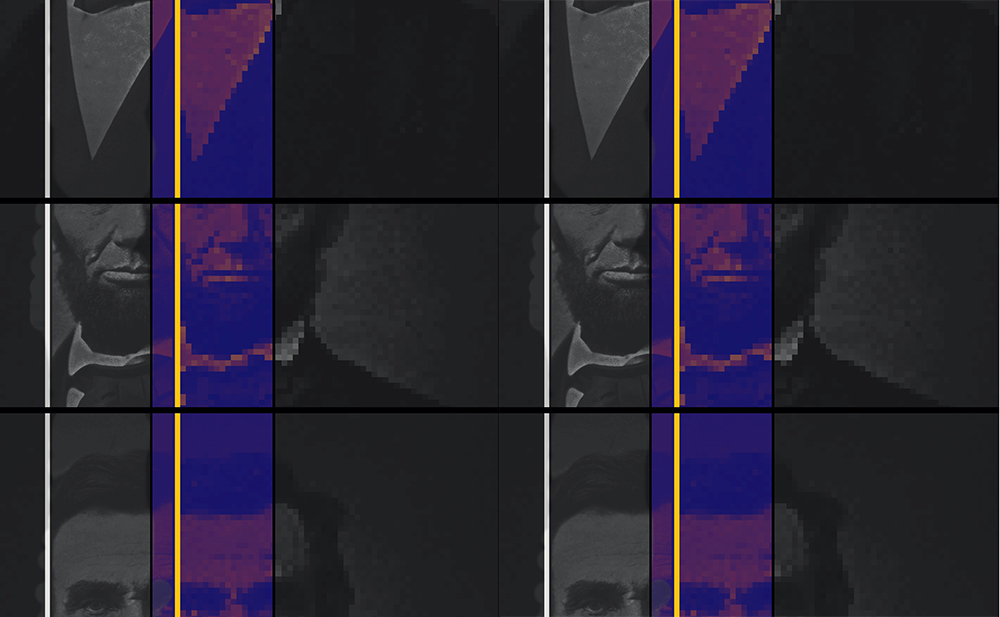 Shadow of a Man

When she wakes in the middle of the night, she sees the tall shadow of a man stretched across the door. Her eyes are blurry and unadjusted to the pitch black of the room, but she can make out a lanky frame. A cylindrical hat resting just so on top of his head. One of her bare legs sticks out from the tangle of white sheets that are so cold while she is so hot. She feels a wakening between her legs and, as her senses come to her, she realizes that the man in the doorway is not a stranger, not by any means. He is someone intensely familiar to her and to millions of others in her geographical cohort.

He is Abe Lincoln.

She doesn’t know where he has come from, why he is here, or why she is feeling as eager as she is.

“Are you ready for my cock?” Abe Lincoln asks.

To her surprise, she responds, “Yes. Put it in me, Abe.” It’s like she doesn’t have control of her body, like it’s a puppet being manipulated by someone else. She finds herself naked and gasping with anticipation.

Abe Lincoln tosses his hat onto her growing pile of laundry in the corner and floats toward the bed. As he gets closer, she sees that he is not a solid entity, but a sort of mist – millions of tiny, glittering particles forming a holographic incarnation of the 16th president of the United States.
This is a dream, she thinks.

Abe Lincoln takes off his dusty black coat without taking his eyes off her naked body. She has never been looked at the way Abe Lincoln looks at her, not breaking his gaze or speaking. The men she has slept with have never met her gaze for more than a few passing seconds. Intellectually, she knows that this is because of an insecurity in the men themselves. But still, she can’t help but feel somehow ashamed. She can’t help but think that why they can’t stare at her is because of some deep flaw they see in her, be it who she is or some glaring vulgarity about her face. It has caused to her to constantly question her value.

Meanwhile, Abe Lincoln becomes a solid. There is real weight when he kneels at the foot of the bed. She is struck by how tall he is. How intense his features are. Abe Lincoln runs his hand along her tan thigh and squeezes.

“I want you so bad,” she involuntarily sighs.

Abe Lincoln leans in and kisses her neck. She feels the prickle of his untamed beard against her skin and thinks of the beards that’ve scratched her cheek before. Past lovers. A man named Andrew Fletcher. Her father when he hugged her as a child.

All were flawed men. Deeply flawed. They’d each been devoted to her in an oddly dogmatic sort of way, a way she couldn’t replicate, regardless of how much she may have wanted to. She has, for as long as she can remember, felt a great allegiance to perfection, and grew to loathe the men she thought she loved as their fallibilities presented themselves more and more.

She recalls a man from grad school – Roddy Jackson – that she’d loved until she began to notice an increasing number of lulls in their conversations. Each lull became longer and longer until they didn’t talk at all. When they ate in restaurants, they seemed to chew to give the appearance of normalcy. She thought about how people at other tables saw them, the couple who chewed rather than talked. Roddy didn’t seem to notice the silences, or if he did, it didn’t appear to her that he would classify these as awkward. Sometimes, she would set down her fork to say something, but nothing was there.

Now in her early thirties, she notices – maybe too late, she fears – that perfection occurs mostly in her head. There are exceptions, of course, and they are worth noting.

There are some that, to be frank, suck. But every now and then, she will come upon a perfect one. And it is always by chance, right? One can never set out to watch a great sunset. The best sunsets are seen from car windows, blinking between the crests of parabolic hills. They are seen briefly in places one has never been before.

Some can be perfect. But here, perfection lasts moments: spices mingling just right, this and that coming together just so.

There are more, of course, but the two examples illustrate that perfection is both random and evanescent.

Before the dream, this is how she viewed Abraham Lincoln.

In history, she remembers thinking, There is no precedent for this guy. Even as a kid, she doesn’t remember ever hearing about anyone who was quite like Lincoln. He saved the Union, he ended slavery. One story that sticks out in her mind concerns his height —

To play a practical joke on his stepmother, Lincoln gathered some local kids and had them dip their feet in mud. One by one, he held them upside down in his kitchen and had them make footprints on the ceiling. When his stepmother returned from the store or wherever, she thought the prints were caused by his head.

This mix of responsibility and humor, like that of two spices in a dish, represented to her the greatest of perfection: brilliance with humility, genius without pretense.

As Abe Lincoln unbuttons his shirt, however, and as she undoes his belt, she sees glaring imperfection. Lincoln appears, in this dream, to be horribly flawed. He appears to be the kind of guy that, if she were, say, at a bar with some friends, and he came up to her, asking if she’s ready for his cock and whatnot, she would find disgusting. He is someone she would laugh at. And, whether she likes it or not, his actions in the dream begin to – perhaps permanently – affect the way she views Abraham Lincoln.

Soon, she wishes to go back to her old perception of Abe Lincoln – as the greatest American to have lived; as the savior of the Union; as a legend who died in a bed too small across the street from Ford’s Theatre.

He is inside her now, humping slowly. Since it is happening to her, but not really, she notices things she wouldn’t otherwise. The way his chest hair sticks to her skin. The way his moans of pleasure look so similar to moans of pain. The way his balls smack against her vagina with each thrust.

She finds the dream troubling, to say the least. Because the truth is, she prefers the shadow of a man. She prefers the illusion of perfection to the reality of defect. In the shadows, man is mysterious and obscured. When he steps into the light, he is insecure and he is lonely; he is deranged and he is evil.

After a minute and a half he comes. He pulls out of her embarrassed. Lincoln, who is regarded by many historians as the greatest US president, wipes his penis on her sheets and searches for his clothes.

She sits up against the pillow wordlessly, half-supine, with Abe Lincoln’s premature ejaculation forming a puddle on her comforter. As he dresses, he becomes a mist again and begins to disintegrate – feet, legs, torso – until he is absent below the nipples, floating at her bedside like a portrait escaped from its frame. For a moment he’s paused there – his shirt half-buttoned, his tie untied in his collar – staring past her at something she cannot see. Then he disappears completely, there and gone, like a gray cloud of breath on a cold day.

Eric Lutz is a writer of fiction, journalism, and essays. His work has appeared in Salon, Paste Magazine, and the Boiler journal, among others, and has been nominated for the Pushcart Prize. He lives in Chicago.