Poetry of the Posthuman: A Review of The Plural Space 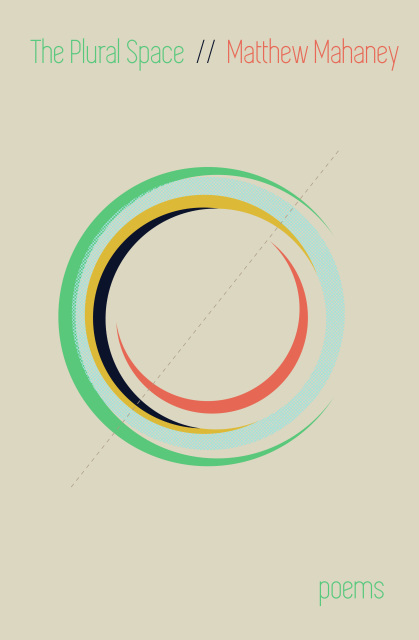 The title of Matthew Mahaney’s The Plural Space invites a question: what is the plural space? The plural space could best be described as a liminal place; the permeable boundary that exists between sound and meaning, word and sentence. It is a place of suggestion and transgression between humans, animals, machines, and other systems, a semiotic field of play where any association is possible. While the concept of a plural space is abstract on its surface, Mahaney concretizes the plural space through rich poetry that demonstrates the seamless associations that are to be found between word, thought, and deed.

Linguistically, the opportunity to explore the plural space is a treat for Mahaney’s readers. In navigating his readers through the plural space, Mahaney demonstrates a grasp of sonic fluidity that is rare in contemporary poetry. “Can an orchid simply ossify?” asks Mahaney in Fawn, creating a sonic relationship between “orchid” and the Latinate “ossify.” Plant matter cannot become brittle bone, but the assonance of the vowels indicates that, perhaps, this could be otherwise. Making intellectual sense of this association is not the point; the relationship must be experienced in language, on the tongue or in the ear. Meaning is no longer found simply within the realm of human thought, but in exchanges in sound, in being.

Mahaney’s ideas have been gaining purchase in contemporary anthropology and philosophy. In his posthuman critique of meaning, How Forests Think: Toward an Anthropology Beyond the Human (University of California Press, 2013), anthropologist Eduardo Kohn writes “Encounters with other kinds of beings force us to recognize the fact that seeing, representing, and perhaps knowing, even thinking, are not exclusively human affairs” (1). In blurring the lines between the human and the non-human on a semiotic level, Kohn seeks to practice an anthropology that “rethnk[s] human language and its relationship to those other forms of representation we share with nonhuman beings” (15). This leads Kohn to question our own subjectivity, and the exclusivity with which we treat knowledge that exists in the realm of the human. “We are not the only kind of we” (16).

Mahaney’s poetry leads the reader to a similar conclusion. Like an anthropologist, Mahaney conducts field research of his own. In Snow Echoes, Mahaney describes his task: “Some of us have been assigned to the plural space. / We search for stray speech. / An accident. / An occupation.” In “The Actual Echo Failed to Appear,” we read Mahaney’s poetic field notes, an account of incident that is difficult to describe:

Something orange occurred, reminding me of speech.
The trees refused to shade or didn’t hear us ask. I
tried to remember the way a listener looks.

The trees are characters, offering agency and a listening ear, extending the “we” beyond the human, to other kinds of organic structures. Mahaney also extends our knowledge-center to the experiential, as the aural and the verbal overlap in “the way a listener looks.” In order to comprehend that orange event—whatever that may be—a new kind of subjectivity is required. Also of note is the presence of “orange” as an event that can be perceived and heard. By exploring synesthesia—a neurological condition that enables individuals to associate ordinarily disparate sensory pathways, can lead to hearing color or seeing sound—Mahaney offers another opportunity to probe pre-conditioned assumptions about what it means to know, to see, and to hear.

This posthuman subjectivity is not only organic, but also mechanical. In “Static Blooms,” we are introduced to the machines, which “look like wasps” and evoke a listening response through their posture: “When their legs are right / angles, everyone can see / that I am listening.” By shaping their forms, the machines communicate something about the poet; this becomes a kind of speech. Sentences themselves communicate beyond their authors; in “The Lives of a Sentence,” we are told that “Sentences read and write in different ways and / understand very little about either process.” Like human beings, sentences struggle to step outside themselves to practice a subjectivity beyond their own sentence-ness. Like human beings, “Many / sentences spend their entire lives unwritten,” existing in that conceptual space between the real and the realized. We exist, but our potentialities remain trapped by our sensory limits. Sentences exist as abstract word-patterns, but unless, spoken, they remain anonymous.

While Mahaney’s poetry is elegant and sonically inventive, the reader can quickly become lost in the Mahaney’s semiotic theories and bizarre word associations. There may be something unjust to restricting meaning to the realm of the human, but like any other type of being, the human is all we know; we are no more un-human than a tree un-tree. The tree knows nothing but photosynthesis and the communication of time through sensations of warmth and the allotment of resources. Likewise, we know nothing but the systems of speech and the sensory modes that we cannot do without. Reaching beyond the human is a difficult task, and one that may ultimately prove impossible. After spending too much time in the plural space, Mahaney is reduced to distraction in “Opaque Coughs.” After watching and listening for too long to idiosyncratic associations, “Bells sweating rust. / Bells soaked in blood wool. / Bells dripping honey”, Mahaney concedes that “It is hard to stop watching […] / Even before I begin searching for the wandering song / my dust-longs lost, I know I won’t be able to find it.” Mirroring the bleak conclusion to “Ice Wrapped in Paper,” I found myself agreeing with Mahaney: “I am listening too much.”