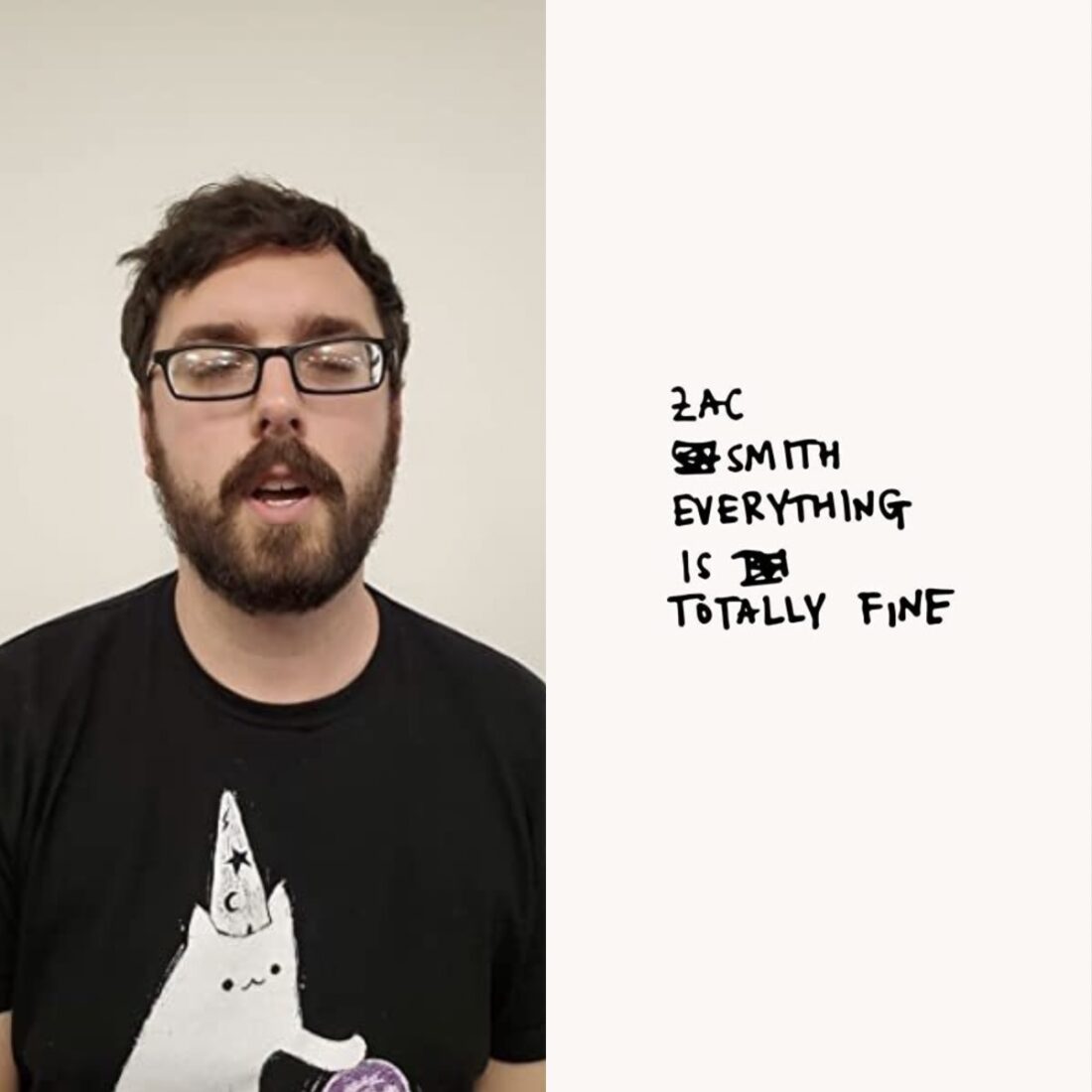 You can write a long book full of witty metaphors. You can rip off dead writers that graduate students write massive essays about. You can use a nature trope or talk about the heart or hide your emotional states by covering it up in ancient rhymes dolled up to impress the reader. But none of this will make you a better author. A better author casually allows you into their mind. They create a structure of their own design to allow the reader into a new reality. At some point, the reader might even begin to think of that author as a friend they once knew. A better author writes in a way that isn’t pedagogical. Their writing isn’t trying to teach or prove anything other than the fact that they are alive and interacting with an imperfect world where everything is fucked. Zac Smith is that better author.

On January 18th, Everything Is Totally Fine by Zac Smith will be coming out from Muumuu House. It’s the first new book to be released from there in ten solid years which speaks volumes about what this short story collection is. In it, he takes on the same relevant themes that we’ve seen for years in the literary world like boredom, despair, depression, and turns them into something amusing. He offhandedly places all of those motifs into stories about dogs, driving, and even Pop-Tarts.

I can’t recall the first time I discovered the being known as Zac Smith. It might have been when he was submitting abstract writing to Maudlin House, allowing me to interview him on a podcast, or reading his poetry collection about barns from Clash Books. But the judgment I have always come to is that Zac has a talent for linguistics in a way that few writers have today. It’s not something often spoken about when it comes to his writing. Most people are typically so much drawn to the vibes he gives off that they forget entirely how remarkable a talent that really is.

His stories, much like his poetry, come off as so simple that people likely don’t believe he has to put much effort into it at all. And that would be a gross misrepresentation of what he really does and how much work truly goes into writing a story that is so fluid that it feels like it could’ve just been a snapshot from your own mind. A moment. An anecdote. A feeling. A vibe. Zac is a master of all genres and is privy to the ways that words work and how to use them to evoke the maximum amount of emotion possible. I, myself, won’t even bother classifying where this collection falls under genres. It just simply exists. Very similar to the characters in his stories. They are not people dealing with intense trepidations or on a character journey of any kind. They simply are. And that’s totally fine.

We live in a burning trash can fire these days and Zac has discovered a way to make that feel ok. He lives in the intersection of absurdism and realism at all times. Not within the confines of the book, but as a person himself. He is a millennial who knows how to write about millennials. This collection contains surreal and inventive stories ranging from six sentences to several pages. All of them dripping with truth, apathy, and comedy. I do not believe that generations above or below ours will love this collection just as much as we do because, at their best, these stories come off as inside jokes. Dorky observations. They’re a kind of situational comedy that I believe that our generation exclusively deals with. That’s not to say that this can’t be loved by everyone. It just hits us a bit harder. But the minute you read it, you feel part of the gang. Don’t take my word for it. I had to pass this book to a few Gen Z kids and one Gen Xer to get their opinions. They like it. They enjoy it. They finally kind of understand why we feel the way that we feel and that’s all because of the uninhibited voice that Zac used to portray the weird situations we find ourselves in. This isn’t just a book to read and put on your bookshelf. It’s one to be passed along so other people can get just as into the hype as you are. It’s metamodernism at its best. Kmart realism at its weirdest.  A book with no real agenda and doesn’t take itself too seriously. Read this book. Enjoy it. Laugh with it. And feel soothed about the fact that every fucked up feeling you’re having is something that someone else is having at the exact same time and that’s totally fine.