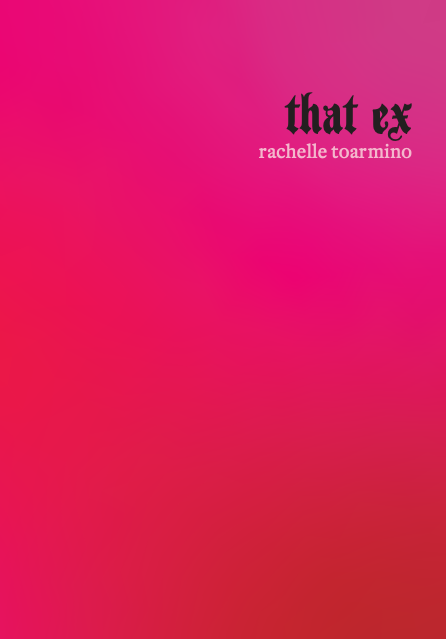 Grief; Love; Nostalgia: A Review of Rachelle Toarmino’s ‘That Ex’

If opening with an epigraph from Carmela Soprano doesn’t perfectly envelop the mood of this book of poetry, then nothing ever will. It’s hard to not want to quote every single line from Rachelle Toarmino’s new book, That Ex (2020). As I write this, the words are already haunting me in the sweetest of ways. If something could possibly feel like a bittersweet, distant memory and breaking news at the same time, this would be it. The second feature in the book, YOU ANIMAL, self-asserts an anthem for the rest of the text:

I don’t think it’s what

we thought it was.”

With this small, yet powerful thought, Toarmino casts us into her most recent anthology with a parachute and no solid ground to land on. She invites us to explore our own ideologies and beliefs when it comes to human sentiment, connection, and the pedestals we erect.

The audience is shortly introduced to her tendencies of dressing traditional concepts in vogue; creating a narrative meme out of God and out of her own existence. She is exposed and vulnerable on a metaphorical cross. She is also the one throwing stones; a victim to herself and also a perpetrator, establishing a battling dualism between what we think we want and what we got, “…and how it feels to have joint custody of yourself / with yourself.”

Her emotions are all at once possessed, lost, projected and personified. At times, Toarmino questions your thoughts by openly questioning her own. It burns and leaves both your heart, and hers, a little stronger. She never lets you feel like you’re alone, even if she herself was. In her piece LOVELESS, she assures us;

“Whatever faith you have is on its way

but hitting every light. All the

right words in the last place

you saw them… So obsessed are you with

that you keep calling it

Toarmino combines classic literary allegory with alternative, contemporary syntax to create juxtaposing situations in which the reader feels like a bystander while also feeling as though they are looking at a friends’ tweets on their iPhone from the comfort of their own bed.

The ability to write with honest self-awareness while also providing a sense of universality and solidarity is no small feat for writers but Toarmino talks through her experiences with an ease that can only be achieved with constant assessment and countless nights of discord. In the poem titled, BASES, she writes:

“you use words to describe my memories

that I use to describe my memories.”

and we have only felt the beginning of how loud that sentiment will resonate throughout the entirety of this book. Her influences continue to include an eclectic array from 2000s Britney vibes, to James Joyce’s Ulysses; from David Foster Wallace to Frank O’Hara. She echoes Shelley and the survival of Lionel; alive, above all else, but alone in the world. She is Sylvia Plath with a choose your own ending. She is Carrie Bradshaw leading us through the lights and darks of love. You feel as though you stayed within a one-block radius of her childhood home, within the walls of her one-bedroom apartment, within the small and large spaces between her and everyone who has ever hurt and loved her, or both. The words are soft and the messages are hard. It breaks you down and breaks your heart. Toarmino uses a heart-shaped mixing bowl to combine feelings and ingredients of classical and contemporary; profound and seemingly mundane.

Toarmino often compares herself, and sometimes others, to inanimate objects when she isn’t recalling feeling physically present by way of someone else’s touch. Even when she encompasses her emotions within the text, sometimes those themselves are treated as objects. Things that can be put away, or carried, or simply moved to the trash bin. Whether it’s shreds of sunlight or the sky tucking itself away into a marble, Toarmino finds a way to romanticize nature and softly tame it. She addresses the natural world as if looking through personal photographs, recalling memories of lost friends and lovers. In I WANTED TO ASK YOU, she lusts;

“We look up at the dark

each individual star for coming