Get me off this bus! 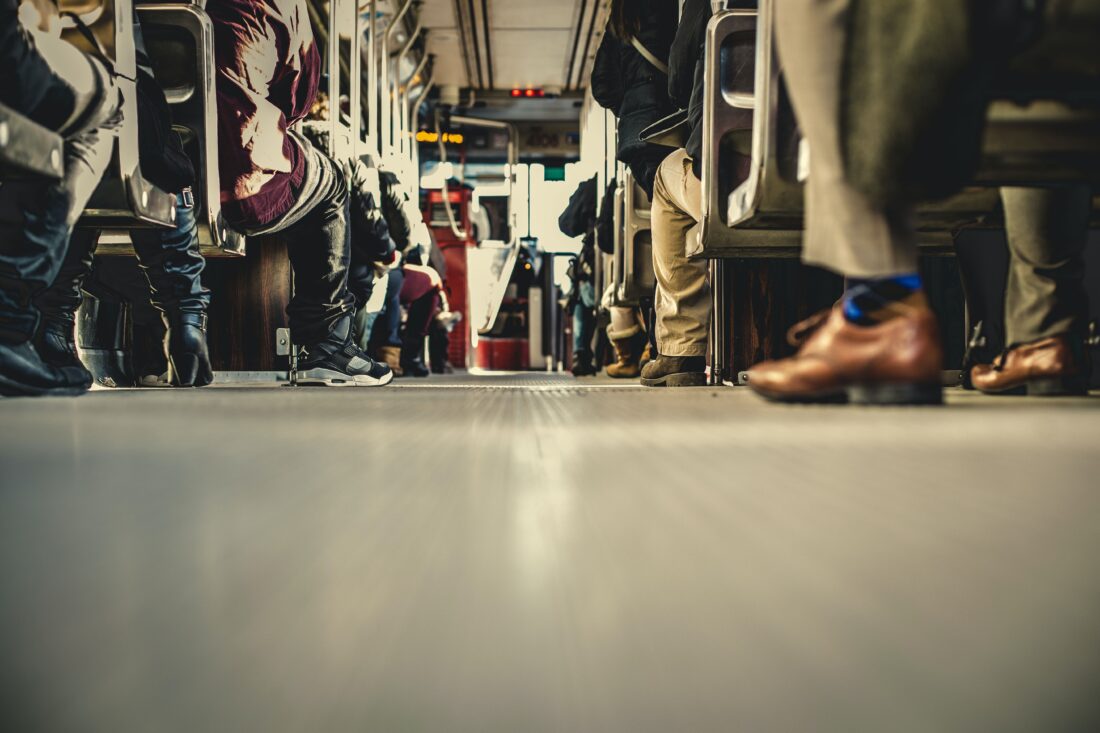 You are here, on the bus. What’s with the bloke up the front, sitting behind the driver. He has kind eyes, long lashes. He’s a kind eye guy. Will he be your friend? Where you’re going, you’ll need all the friends you can get. Damn. He’s looking at you, with his kind eyes. Are they really so kind? Kinda look like he wants to stab you. Look out the window. Old lady hobbling down the road, tattered petticoat poking out the bottom of her dress. Walking stick, chipped black paint. What’s she been banging into? Damn. To be old with chronic pain, that’d be nice. You’d trade. You’d trade with anyone. Cancer patients, depressives. This seat is sticky, smells like years of piss and sweat and fear soaked into it. Jesus. How long does it take? An hour? Two hours? You’re really moving. Driver got a hot date? Dunno bout these blokes, but you could go ten more minutes of freedom. Don’t stop. Drive right past jail. Forget jail. It’s overcrowded. Stay on the bus forever, stop at drive-throughs. Eat from grease traps. Do dishes. Anything is better than where you’re going.

You get off the bus. Don’t stare. Show respect. Look ‘em in the eye but don’t stare. They can smell fear. Smells like old mattress sweat mixed with battery acid. Don’t borrow money, don’t change the channel, if some bloke is eating his dinner, don’t reach over him. If some bloke comes at you, fight like crazy. Take a beating if you have to. Take all the beatings. Doesn’t matter, you have to fight. If you don’t they’ll mark you as a man they can mess with. And you don’t wanna be that man. You are that man! You’re not hard. Never threw a punch in your life. Maybe once, when you were thirteen, on the cricket pitch. Does that count? Is that piss? Please don’t be the latest in a long line of men to piss their pants on their first bus ride to prison. Breathe. Look out the window. Is that… the ocean? What’s this driver thinking? Last thing you need is to see the natural wonders you’ll miss. Look at that. Waves crashing on the sand, sunlight winking on the surface. Is that a dolphin? A pod of dolphins? You’re seeing things. The blokes on this bus have probably kicked ninety-seven teeth down thirty-five throats, now they’re picturing wet sand squishing between their toes, foamy ripples lapping at their ankles.

You can get seven years back. Sure. Sure you can! Gotta stay positive. For her, The Smurf. Use the time to better yourself. Read up, bulk up, learn a trade. Learn to cut hair. You cut your own hair once. Didn’t look too bad, a little clownish. You were high at the time so… what were you up to seven years ago? You know. Walking home, six in the morning. First rays of the day, dancing behind the clouds. No sleep. Nose running. Throat dripping. Trembling. Like you are now. You had the juice back then. The game. Flashing in your veins like liquid lightning. She was eating egg whites. Purple yoga pants on her legs, ballerina bun on her head. Sure was tight that bun, pulled her cheekbones to the sky. A power move. Out came the waiter with her green smoothie, and you swopped. Gulped it down, big burp, and you were on your way.

The very next day you saw her.

“Lady keep it down you got me all wrong lady.”

“Okayokayokay you got me. Please tone it down? I know you got the pants and the bun, but chill. Tell me your name.”

Out it came. Ten, twenty, fifties. Blood freezing in your veins, waiting for the WOOP-WOOP! of the siren. Eighty grams you had on you. Stuffed in a pillow case, wrapped in a hoodie, rammed in your backpack. No sirens, but she wouldn’t quit. Really had a lot to say. The anger got to you. You wanted to change for her. Walk in the park with her, watch blind fruit-bats land clumsily in the treetops.

Not long now. Twenty minutes? Ten? So quiet. Not a word from these blokes. Tinkle of cuffs as the bus goes round a bend. Cough, gear shift, that’s it. This a first-timer’s bus? Nah, these blokes look well hard. You’re the only one. Proper virgin flower. Oh god. Is that a wall? Yup. A tall wall made from old grey stones. Bet those stones have seen some horror. Towers, barbed wire, all the trimmings. On the other side, your home for the next seven years. Or longer. You never know. Oh god no. Don’t go down that road. Look around, soak it up, last few minutes of freedom. Bloke on the seat in front, fabric of his shirt. The weave. Soapy green cotton. What’s that on his neck? Tomato sauce? Sausages for breakfast? One last banger before the bus ride. And those bristles – hard and black like wire. One long one, piercing the white peak of a pimple. Jesus. Don’t let that be your last image. Out the window now. Dead leave son the ground. Brown and crunchy. Such beauty. How many you stepped on over the years? Never cared for them. Never even knew. But now, wow! And dandelions! Peering up from the cracks in the curb stones. Yearning. That’s grace that. Follow the lead of those flowers.

But listen. Go back to that morning. When the light came through the blinds, making that slat pattern on the wall. Lie in that light for the whole bid. All seven of your years. Live in that morning – that perfect four hours and forty-five minutes. How many minutes in a year? You looked it up once. Half a million? Times that by seven, you got 3.5 million minutes. So what. Don’t do it. Don’t break your time down. Go back to that morning. You woke up and there she was. The Smurf. Sitting on the floor by your bed, playing with your watch.

“Your watch. It was all tangled.”

“Thank you, darling. You want some breakfast?”

By the time you got to the mall, the place was nearly open. Sushi train. The lady putting out stools. Off to the pharmacy, for some pink nail polish. Pink with sparkles. The kind that dries in an instant. Back at the sushi train, the lady lets you sit. The chefs slicing strips of salmon, tuna. Smurf lay her palms on the bench and you applied the pink sparkles. Strong chemical smell, strong Pavlovian response. Her eyes wide as you dabbed a thumbnail, taking care not to paint the skin.

“I want the pinky fish, Daddy.”

A final coat on a little finger. Such a tiny finger. Twice as long as the nail on your thumb.

Will she remember that morning?

Will she remember you?

Will you still be her Dad?

But not her Dad Dad.

Pop quiz. You’re in line for your dinner. Metal tray in hand. A bloke cuts in front of you. Do you:

T wore the pants that day. Purple yoga pants. She was on her way to yoga, but you gave her some spice.

“Anywhere. I don’t care. I need to sit near your brain sparks.”

You slid under her skin. She had never been wanted like that, not in your silly way. She found you romantic. Maybe you were. You were telling the truth – a thing you hadn’t done since you were seven. If it meant you got to smell her sweat, see the freckle on her throat up close, you would swear off lies. She fobbed off yoga. “This better be good,” she said. You took her to the ice cream place. The waffle cone place. “These your big guns? This what I gave up yoga for?” You felt attacked. Personally attacked. Blood trickled down the undersides of your shin bones, telling you to run, telling you she was right, that you weren’t shit. “I know somewhere better,” you said. The abandoned amusement park, out in the bush. Waterslides overgrown with vines, crumbling rollercoaster, creepy open-mouthed clowns with their eyes gouged out. And the Ferris wheel, sitting in a field of grass that grew to your navel. You helped her onto the horse and pushed. Really put your shoulder into it. At first, nothing. “It’s fine,” she said. “Do not dismount! It’s starting to move!” It wasn’t. But then, a creak. A long hollow groan. Flecks of rust flew onto your dirty white kicks. You got it spinning. Slow at first, then faster and faster. You pushed and pushed and pushed. Like some carthorse. Round and round and round she went. Squealing, laughing, long purple legs kicking at the sky.

There she is. The gate. See those guards? Their guns? They won’t save you. They wish you harm. To them you are not human, just a number. What will your number be? Soon find out. Not long now. Two hundred meters? A hundred? You’re here. Oh god. Don’t die. Don’t worse than die. First day is the toughest, so they say. Survive the first and you can do ‘em all – all two thousand five hundred and fifty-five. Learn the rules. Wear your flip-flops. They’ll be all you’ll have. Blue or white? Grey probably. Point is, you won’t have anything. No possessions, no dignity, no love. Don’t talk to the staff, the officers, the screws. Don’t talk like that. At your house you had a pool, cokes in the fridge, ride-on lawnmower. Shiny toes on your black school shoes, skipping through grass on dewy mornings. Braces on your teeth. Such straight teeth, about to get knocked down your throat. Don’t choke on those molars. You’ll get eaten alive. You can’t fight. Sure you can! Pah! Pah! Pah! You’re human and humans are fighters. Love to knuckle up. Fight to survive. It’s instinct, it’ll kick in. First night, first steps. Walk to your cell, say what’s up. Don’t stare. Lie down. Walk around. Pace. Round and round and round. Go back to that morning, to the sushi train, the Ferris wheel. Round and round and round.

Never had you been so high, the night Smurf was born. Rushing to the delivery room, nurse tying your gown. Hat, mask, light blue booties on your shoes. Trembling, sniffing, dripping. You made it, and it was quick. Twenty minutes give or take. The Doc was cracking jokes, then she slid a needle into T’s spine. Up went the sheet, in went the scalpel. Working fast with the beeping. Two beeps? Doctor lifted her out, all blue, screaming. Screaming was good, screaming meant life. The nurse washed her off, weighed her, lay her on T’s chest. You felt like a family. Nestled under the sheet. It was real. Wasn’t it? Sure. Sure it was. Tears all over the shop. She went with you, The Smurf, while they stitched T up. You sat in a room with her. Held her. Such a small bundle. So light. For a human. She yawned. You held her. You were there.