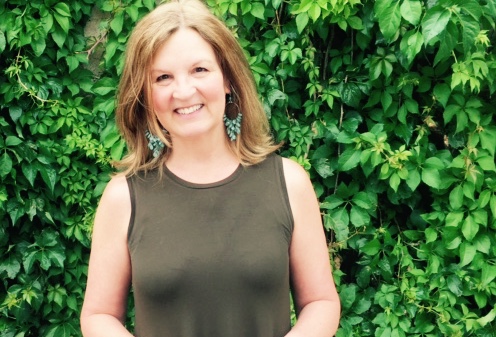 Kathy Fish teaches flash fiction for the Mile High MFA program at Regis University in Denver. She has published four collections of short fiction: a chapbook in the Rose Metal Press collective, A Peculiar Feeling of Restlessness: Four Chapbooks of Short Short Fiction by Four Women (2008); Wild Life (Matter Press, 2011); Together We Can Bury It (The Lit Pub, 2012); and Rift, co-authored with Robert Vaughan (Unknown Press, 2015). Her story, “A Room with Many Small Beds” was chosen by Stuart Dybek for inclusion in Best Small Fictions 2016( Queen’s Ferry Press). She blogs at http://www.kathy-fish.com/.

What sideshow attraction would you want to be at a circus and why?

What was the collaborative process as you and Robert Vaughn put together Rift?

It was several months of intensive writing and sharing our stories back and forth, giving suggestions. Long phone calls. We worked well together because we have different strengths and things we like to do. Lots of creative energy. We were working under a deadline too, which is a terrific motivator. It was a very positive and fun experience.

Fast Flash Workshop is a fantastic, generative workshop for flash fiction writers at all experience levels. How did you come up with the workshop?

A couple of writer friends had been nagging me for months to teach a flash fiction class. I am not what you call a “dynamic” individual, so have to be goaded into doing things, ha. But I began to like the idea and sketched out some tentative craft discussions with writing exercises to accompany them. But I also felt I needed to test my workshop out first, so I asked on Twitter if anyone would like to volunteer to beta test the workshop for free. Within five minutes I had my group! I’m so grateful to them. We had a fantastic experience, but from running the group I saw things I wanted to tweak and change and also researched a platform for the class.

I keep revising the workshop as I go, but have now taught ten workshops, with over a hundred participants and last June we had a Fast Flash Reunion Extravaganza Weekend that was free to everyone who’d taken the workshop. Seventy-seven new flash stories were generated in three days! It was a blast.

The main goal of the workshop is to get everyone to write a ton of new material that they can later edit and revise and send out. I find the best way to get in the “zone” as a writer is to silence the inner critic and just write full tilt, with the joy and invention of a child at play. The most gratifying aspect for me is that dozens of the stories written in Fast Flash have now gone on to be published in get places and nominated for awards.

I’m not a poet at all, but many of the flash stories straddle the line between fiction and prose poetry. I think some of the best flash writers do have that background in poetry like you do, Jesse. It shows in their work and I envy the playfulness with language and imagery that poets bring to flash fiction.

You know, I don’t come from a creative writing program myself. Everything I’ve learned, I’ve learned by just being out there, doing things, talking to people, etc. You’re right, I don’t think it is taught and it should be.

My chief advice is become an active literary citizen well before you have a book that you need to promote. I see writers just seem to appear out of the blue, book in hand, asking for reviews and blurbs, asking to be invited to readings, and so forth.

Give now everything you seek to get later on. That means reviewing books, helping promote other writers on social media, going to readings, interviewing writers, buying and reading books and literary magazines. Even once you’ve published a book, continue to be a generous and engaged literary citizen. It goes a long way.

Will you ever consider working in longer form fiction, like a novella or novel?

Absolutely! I’m working on a novella right now. But because of how my brain works, I’m writing it in short flash-like chapters. I’m pretty excited about it, but it’s slow going. I’m probably being too perfectionistic about it.

What advice do you have for someone who wants to write flash fiction for the first time?

There are exciting things going on in the Denver Lit Scene! We just had our first Lit Crawl a few weeks ago involving the Mile High MFA (which I teach for), Lighthouse Writers, Nancy Stohlman’s F-Bomb reading series, Tethered by Letters, and the Inkwell, and it was a huge success. The Book Bar and Mercury Cafe are fabulous venues for readings, among many others. If I were to characterize the Denver lit scene and its writers I’d say we’re a fun, open, inventive, unstuffy crowd.