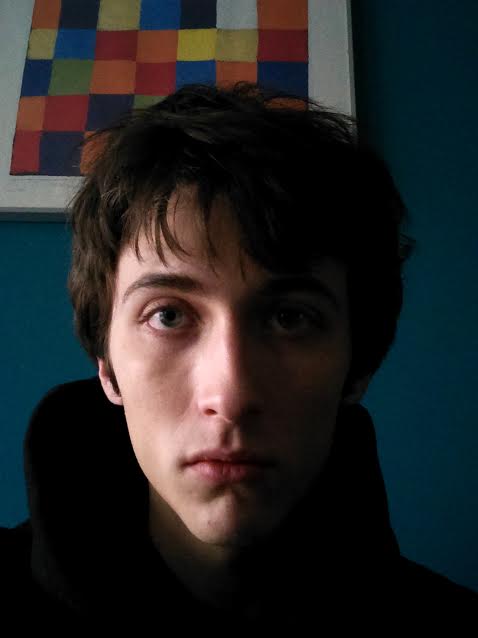 Luis Neer [b. 1998] is a poet/artist from Chester, West Virginia. Their most recent published works include a debut full-length collection,Extinction (Sad Spell Press, December 2016), and a free digital zine, Life after ppl (Glo Worm Press, Oct 2016). Find them on twitter@luisneer.

I was also going through a thing where I never turned on the light in my room, so most of them were written by candlelight or by moonlight. I felt like Genet.

Your newest collection Extinction (out through Sad Spell Press) is your first full length collection, how does it differ from your six other chapbooks (all out in 2015 and 2016)?

It’s way more involved, and operates on a larger scale. I think a lot can be accomplished with a chapbook, but I hope there’s more potential for Extinction to have a lasting effect on people. I wrote most of it at the end of 2015 and in January 2016. I still hadn’t been publishing or writing for a very long time, but I think the conditions were right for me to produce a work that could showcase my artistic ability at its peak. My first chapbook was in the process of being released, so for the first time, I was getting a little more attention online; I was doing poetry readings, which I don’t get to do very often; and I was constantly engaging with other poets’ work. Emotionally, it was my worst winter. I think if I would have had any less light in me, I wouldn’t have been able to write at all.

Most of the poems in Extinction were written in the middle of the night, because I would conceive of them during the day and then not have a chance to work on them until I was already in bed. So I would have to drag myself out of bed to write them. I was also going through a thing where I never turned on the light in my room, so most of them were written by candlelight or by moonlight. I felt like Genet.

You are one of the youngest writers in the scene with consistent publications. Do you feel like your age has impacted your experiences as a writer in any way?

I’m nervous about other poets—especially poets working outside my scene—not taking my work seriously, but writers within the scene have always been generous and helpful to me, and I feel at my best when I’m engaging with other artists. Experiences with other college students have been upsetting because no one seems to realize that poetry still exists (outside of, like, typewriter “poetry” on Instagram), so when I mention my book or my chapbooks—I try not to mention them—people don’t seem to understand or care. I get asked a lot if I’ve taken the poetry workshop at the college, which is strange to me.

You recently put out a digital zine of sorts called Life after ppl through glo worm press. What was your intention with the zine?

I started working on Life after ppl in June 2016, but it wasn’t until late August, when Frank Ocean dropped Blonde, that I started to focus really heavily on the project. Blonde raised the bar for artists in general, and I was really excited. I was preoccupied with working in a format that would allow me to explore the influence of hip hop on my art. I was thinking that a lot of the essence of hip hop is in aesthetics, branding, and production, and I realized a big part of the design of hip hop is collaboration, because it democratizes the form on a base level.

I was really preoccupied with the zine being a democratic work, too, but that’s weird to me because at the same time that I was working to democratize the project, I felt really alone and really obsessive while I was working on it—more so than with any previous projects. I think it retains vestiges of that private energy. I’d like to make another zine in 2017 or 2018, and expand on these ideas that came out of the process of making Life after ppl.

What would you say are the most consistent themes in your writing?

I think that the essential theme in most of my writing is distance. You find a lot of subjects contained inside that theme: Extinction is about heartbreak; Waves, my best chapbook, is about missing God; Life after ppl is about being an artist on the internet, interacting and working with people one knows only remotely. When you break those subjects down, you find that their most crucial energetic base is distance.

What are your favorite and least favorite literary trends?

I’ve been feeling a lot of confusion about intimacy in my life, because so many of my relationships occur remotely that even as I tend to feel overwhelmed by all the activities of my individual relationships, I still feel depressed and deprived of intimacy.