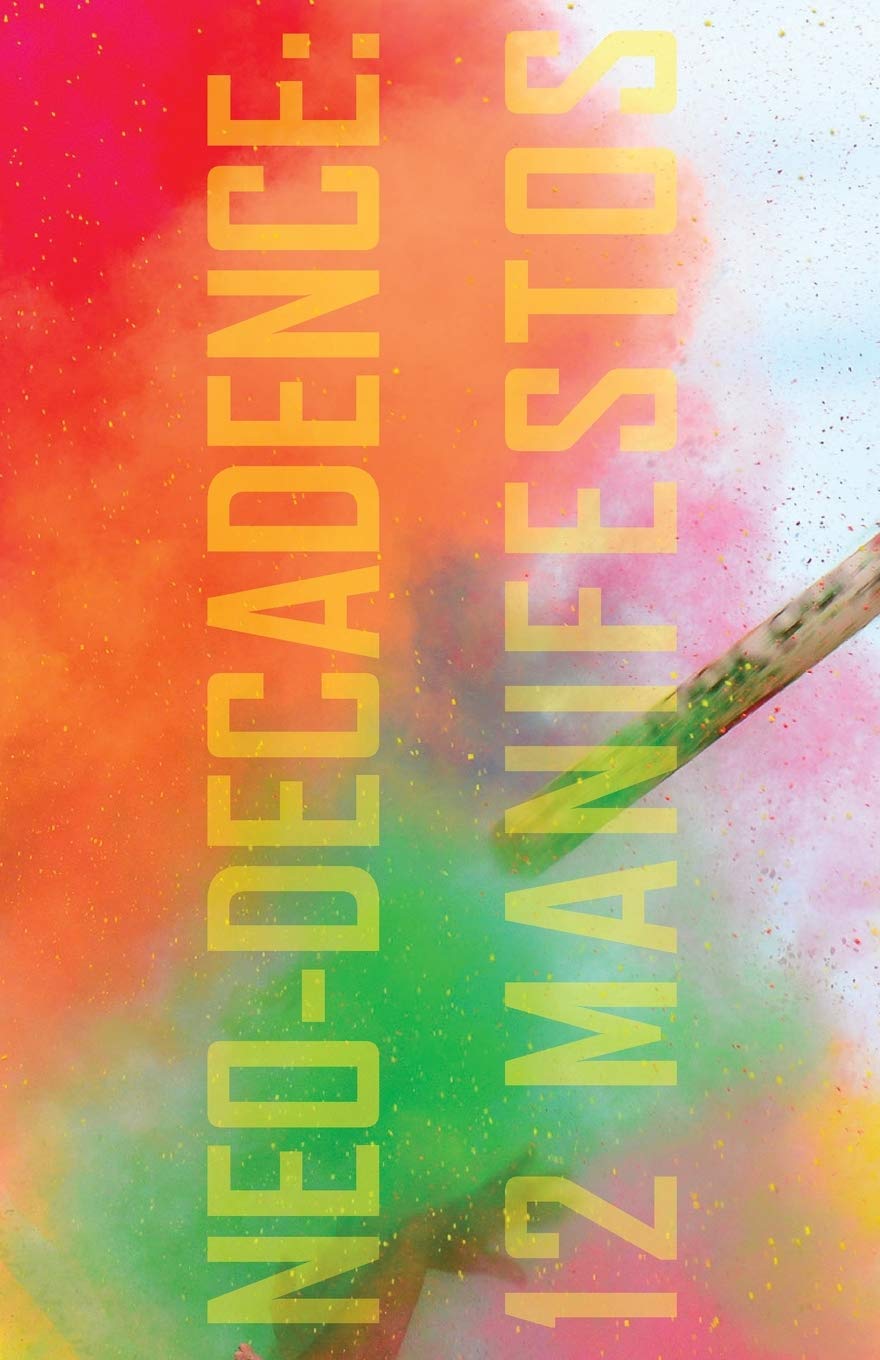 “The wasteland of the 20th century is nothing less than a reliquary. Those that came before us have left in their wake an empire of exquisite jewels.”

Apparently, the poetic moment of thought becomes a concept, becomes a jewel: a cultural bounty. William Gass once mentioned that his fiction was a plane too encrusted with jewels to take off. Well, if jewels are the venerated myriad of modernity, then the work of the so-called Neo-Decadents deals not with flight but goes about its task with the libidinal meticulousness of a disgraced viscount waiting to rob the future blind of a glittering hoard, laughing all the while. And, to the chagrin of the appraiser, they take the uncut stuff too! And the plastic!

Neo-Decadence: 12 Manifestos, edited by Justin Isis, brings together a series of profane meditations on topics from fashion to British poetry to video games and architecture. Written by the international group who publish under the aegis of the Neo-Decadents, the pieces vary greatly; most are in manifesto (list) form while others manifest as essays that encompass vast metaphysical and aesthetic systems, which give insight into what unites the practices and provide some footing for the more gloriously unhinged proclamations.

The manifestos proceed through negation, for the most part, railing against popular morals, materialism (scientific ontology) and what they call Neo-Passéism or “the unexamined artistic logic of capitalist realism”; the manifestos reach for a practice of writing and living that eschews fetishes for jargon and technology and instead proceeds by means of the fetish of the fetish of the fetish. Here, the spectacle is ripe and rotting, and the reader is asked to pluck it, to put aside habits and stretch outside of the iron cage.

Far from a self-help book or the infantile nostalgia of lifestyle pretenders, stoic revivalists, and Jungian crypto fascists, 12 Manifestos is not sincere; the authors flood the page with irreverence, insight, and humor, all the while invested in the limitless potential of the present and the future-present. Triumphant and eulogic simultaneously, the prose sits at a ruined, luxuriant castle that marks a refused choice between levity and conviction.

“Kublai Khan was a modern. Things fell apart a long time ago. We are already living in the ruins of civilisation. There’s nothing to celebrate. When you toast, make sure you smash your glasses together. This kind of writing should be the same. Harmony is overrated.”

The somber negations of the more general manifestos and essays are tempered and often outpaced by the sacrilegious hilarity of the more specific ones. In the manifesto on “Women’s Fashion” considerations of masks of “faceless, larval gods” are arrayed among delicious tidbits like “a triangular umbrella is correct”; in the manifesto on “Cooking,” a particularly wry disquisition is launched against the horizontal table in favour of the vertical one, an implement through which dining will be revolutionized, food is presented on pikes, dripping down, mixing, plateless, an activity in its own; this meditation is immediately followed by a barrage of “Household Tips” with juicy tidbits such as “If one cannot garnish a dish with pearls or emeralds, one should not garnish it at all.” No metaphors here—only dictums howling from the aching voids of aborted lyric.

“No precedence is given to the Decadent writers of the 19th century, their modes or milieu. Neo-Decadence is more likely to cross 1990s video game dialogue with the structure of a 16th century picaresque to discuss a drug deal in present day Mongolia. Fealty and earnestness can only hold back progress. We do not have saints, and we consume our idols.”

12 Manifestos does not romanticize the clique. It takes leads from cosmic horror but then shreds genre. It muses on the noveau romain but then plunges deep into the psyche of some future critic. The writers of transgressive fiction look on, interested but not spared; everyone gulps, wondering where next the Neo-Decadents will turn their irradiating gaze, what artifacts infused with impish science fictions, what mores decapitated. Through experimental, psychedelic rites reminiscent of Jarry, hierarchies are crushed in specific, poetic ways that would make even the most ardent Situationist or surrealist blush; video game frames are put on the level of the poem, while the search for vinyl is offered as an expression of divine-seeking. All the signs of culture and subculture are up for grabs; this practice mirrors the early novelists like Sterne and Sade who fumed the intimacy of the profane into the holy forms of liturgy and the capitalist’s lists. Here, saccharine humour pulls the rug out from progress and nostalgia at once. An essential read for anyone who has been craving some sort of critical mass that shinecuts through the monotony of our smooth world, 12 Manifestos is tumescent, an invitation beyond vacuous obeisance, spiritualities, and MFAs.