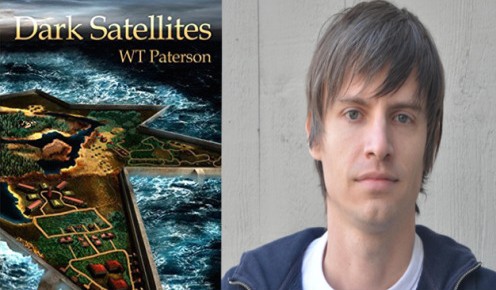 “Surviving Does Not Absolve You From The Sins Of Living”- Bronis

Dark Satellites, WT Paterson’s first novel, paints a picture of a world. A strange yet familiar world. A world with elephants that are not quite elephants and satellites that aren’t quite satellites. The mere act of living in this world is warped and nightmarish and the human mind lay broken in the ruin of it. Populations are distorted by fear and paranoia. War is everywhere.

There is no war zone when the satellites can access your thoughts. The dark satellites are out to get you. Manipulate you. Distort you. Bend your mind to their will and laugh at your inability to cope with the strain like elephants with glowing eyes. Death is the only cure. The euphoria of the kill outweighs all. Destroy the dancing silhouettes.

There exists a man-made island built of high walls in the shape of a seven point star. People so shattered by the horror of the death all around them, fling their bodies off the walls and into the ocean.

Walls cannot protect you from your own mind. Death and war is maddening.

The novel as a whole is a fluid and poetic, dark atmosphere. Lynchian and prophetic of perhaps our own future.

Paterson presents us with a non-linear narrative that follows ubermensch-soldier, Poe– a man fighting the satellites. A man without fear. A who loves battle. Sometimes coming off as a walking masculinity complex, Poe exemplifies the psyche of a man not just in love with war, but broken by it:

“feeling a man die in his hands and then feeling the soft body of the young girl in front of him made him unusually complete.”

This novel pulls no punches. WT Paterson lays all forms of horror out in this gripping sci-fi fantasy, whether it be the shocking images of children dead or the carnival like sex atmosphere of the island.

I saw the book as an allegory of a post-9/11 world. It highlights the ways we sacrifice our lives and freedoms to protect against fear. How we let technology intrude our daily lives and let those who would exploit our fears manipulate it. This book may be a sci-fi fantasy, but it is deeply entrenched in reality. It provokes deep thought and reflection. I highly recommend checking it out, even if you aren’t typically into this genre (I wasn’t before reading it).

A Playlist To Read By: