Some Further Corrections: A Review of Jack Buck’s Deer Michigan 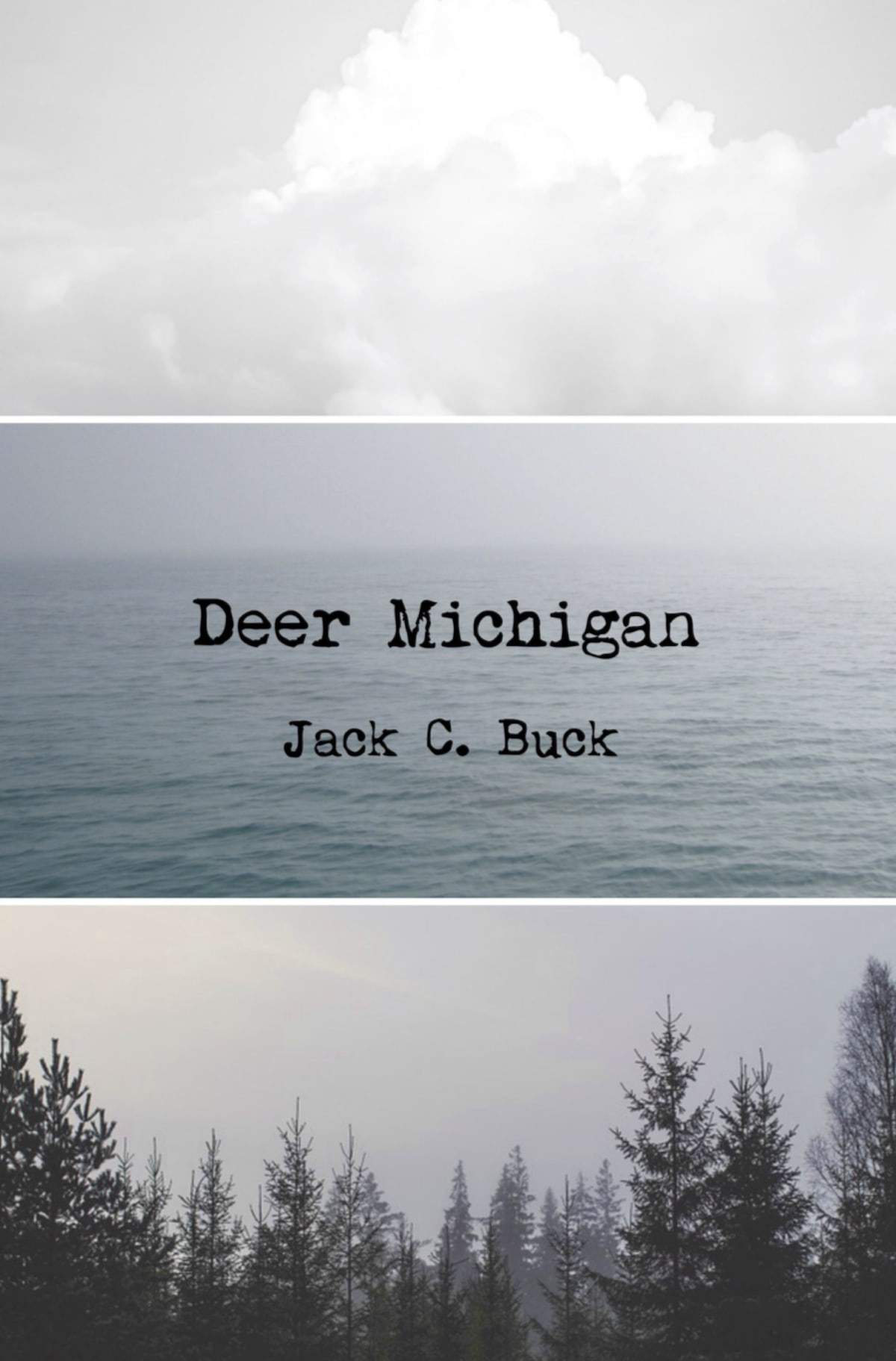 In his 2001 novel The Corrections, Jonathan Franzen, himself a child of Midwest, crafts a Midwest that is culturally repressive, a space in which one happens to be born, and which one vacates at the nearest opportunity. Likewise, Illinois native David Foster Wallace’s posthumous novel The Pale King revolves around the lives of IRS workers in Peoria. His characters are paper-pushers, shuffling files day in and day out from within rooms that must be imagined as grey, fluorescent cells. I’ve driven past the town at least twice, and at a glance, it appears as bleak as Wallace describes. I’ve never bothered to pull off the interstate to give it a closer look.

I moved to Illinois from the Shenandoah Valley in Virginia, and I’ve always struggled to find beauty in the grey, low-hanging clouds, industrial towns, and the long, damp winter. Still, I am grateful for writers who, far from seeing the Midwest as a cultural and geographic regression that is best left behind, manage to transform the flat landscape into a tapestry of rich human striving, elevating low-stakes neighborhood drama, passive-aggressive tension, and even the brown-grey color palette.

Jack Buck, author of the new collection Deer Michigan, is this second kind of writer; the kind of writer who loves the Midwest, and wants you to love the Midwest too. Buck’s prose blends the lyricism of folk singer Sufjan Stevens with the non-stop standing energy of Jack Kerouac, applying Kerouac’s spontaneous prose to Midwestern sights and sounds. If Buck is a kind of Kerouac, he’s not the classic type; he’s no swiftly burning star, snuffing himself out prematurely with too much living. Rather, Buck is a Kerouac who knows self care, who knows the importance of lingering and, eventually, abiding. And it is this sense of abiding that is at the heart of all that is, in fact, beautiful about the Midwest. It’s a place of long histories, deep tradition, a place that rewards those who remain.

Buck’s collection of microfiction offers spare—but never terse—stories of growing up in Michigan, swimming in rivers, waiting for the Cubs to win a World Series, and late-night train rides to and from Chicago. Some of these pieces are among the most Midwestern pieces of fiction that I’ve ever read—delightfully so. “Write Talk-Talk If You Have No One To Talk-Talk With,” a numbered list of suggestions for the everyday, reads like a primer on Great Lakes etiquette, ways of inhabiting other people’s lives that are warm, but not intrusive:

10. Tell your friends and family what you had for dinner last night.
11. Bond with coworkers you normally don’t talk with over the memory and promise of good food by way of food talk, maybe it will lead to other promising conversation, like, what good HBO shows you are both currently watching when you get home from work.
12. Buy a second hand shirt at a thrift store that doesn’t fit you but will look good on a friend, tell them you saw and thought of them.

This is matter-of-fact wisdom, a how-to guide for keeping friends and family close. Desires and needs revolve around things that are unremarkable, but vital: food, clothing, and good storytelling. What is remarkable about Buck is how much he actually loves the ordinariness of things. He has a Chestertonian fascination with the unremarkable fact that public transportation works, that people meet and have families, that good neighbors rake leaves for one another. And this sincere love—so different from the cynicism of Franzen and the existential distress of Wallace—makes Deer Michigan so much more than an homage to patterns of midwestern life. It makes the work wise.

This proverbial quality appears in “Almost There”, an incredibly brief piece that evokes Kerouac’s work in Big Sur and Dharma Bums. It’s so short that I’ll just quote it in full:

A walking out of the woods, a clearing, after having been lost in dense pine for which seems like three or four long hours, or maybe it has been three or four years in a trackless forest. I can see myself when it happens, after all the turnarounds and switchbacks. The sun burns through the dawn fog. I am almost there.

Buck’s prose here is arresting, but it’s the final four words that give the piece its heft. “I am almost there,” but where is there? Does it matter where there is? After all the switchbacks, the fog, the suspension in time, the piece ends with a brief reflection on destiny and destination.

Speaking of destinations, death is not absent from Buck’s work. Indeed, characters are dying with frequency in Deer Michigan. The Midwest itself, populated by baby boomers and the blue-collar base of the old American economy, is a place where death is not uncommon. “The Evolution of All Things” deals with these themes with prescient grace. The story describes a man’s homecoming to Kalamazoo for his father’s funeral. This is the closest that Buck comes to probing the intergenerational tensions between Midwestern parents and their children, who by and large leave for urban or coastal regions:

He was a good son, despite those tough turmoil years of lashing out at his father over the dinner table. Their father-son relationship was healthiest when they didn’t live in the same city.

If Buck ever resembles Franzen, it’s here. But even in this, Buck is willing to conclude the narrative with a familial sincerity that never belies the infighting and anxiety of Franzen’s Corrections. And in appropriately Midwestern fashion, this moment of grace all revolves around an heirloom, and a story:

The funeral was attended by their loving, quiet family. Leaving the ceremony, Josiah is wearing the winter coat of his late father. The son has brought the winter coat a new life. It is not the winter of 1973, when his father first wore it, yet the winter weather is just about the same as then.

Buck’s work captures a facet of the Midwest that we often refuse to see. Are the clouds low and grey? Yes, and the jobs can be poor, and the communities can be passive and conventional. But there is a lot of life here, and it is rich with the fullness of all human life. It is elevated not by writers, but by it’s own being. In “Dead Jack Kerouac,” a final homage to his own guiding light, Buck invokes a forgotten line from the great writer, which in one sentence defends and justifies the whole project.

Forgot how it goes, but that one Jack Kerouac quote before he gave up and taught us how to live, when he was headed west, at the dividing line of the east of his youth and the west of his new life, crossing over the state line of Colorado into Utah, seeing God in the sky above the desert salt in the form of a giant, magnificent sun, with all that road ahead and all that road behind, pushing and pulling with one’s life at the center of it all.

You can buy Deer Michigan here