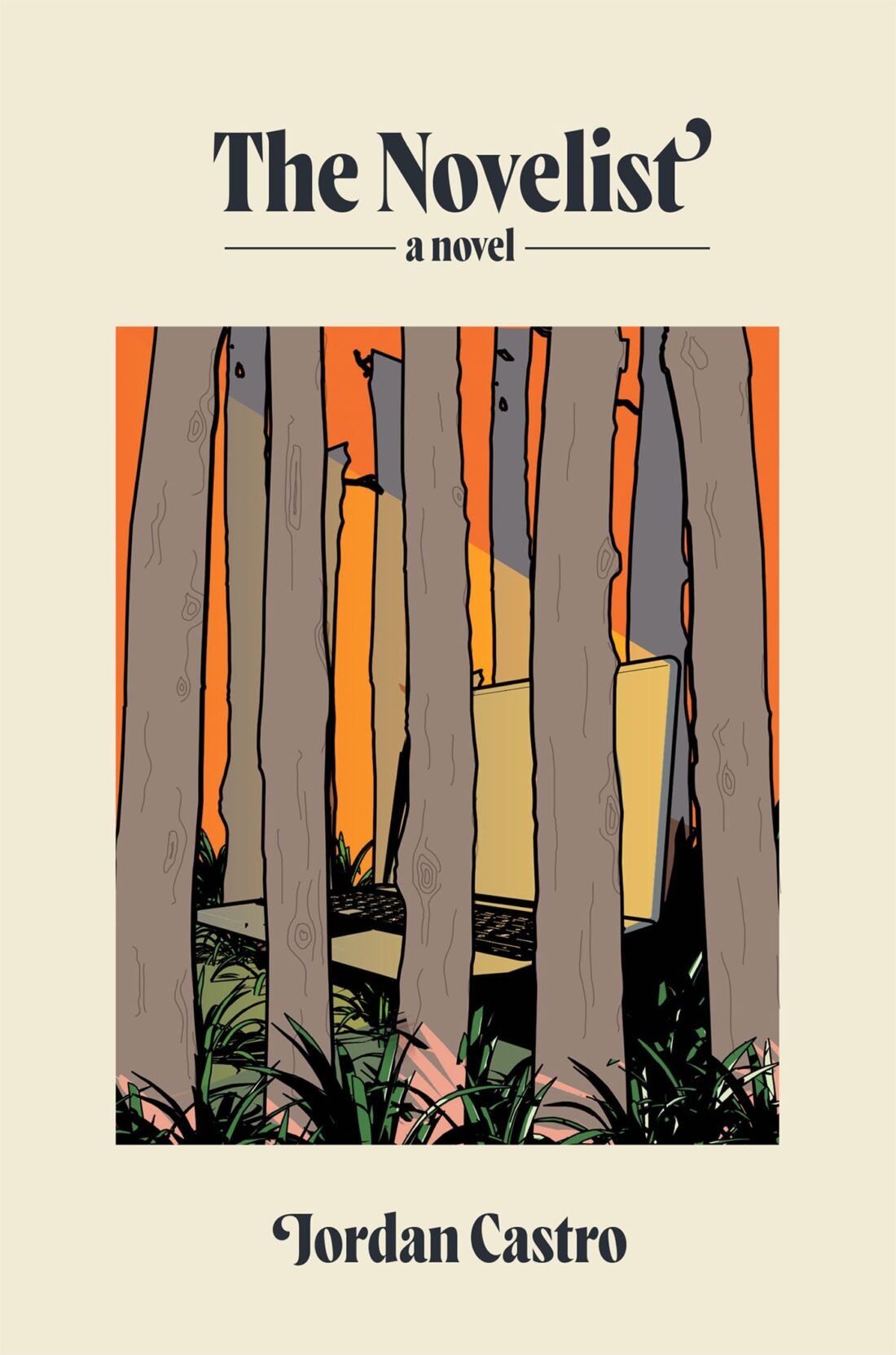 The Reviewer: A Review of “The Novelist”

I clicked the power button on my laptop five times, holding it down for varying lengths, and determined that my laptop was, indeed, dead. I considered how much a pawnshop would give me for the laptop; I kind of arbitrarily calculated that they would give me around 25 dollars because of the model, year, and general wear-and-tear the laptop had accrued over the last two years. I plugged it into the wall beside my desk and, while waiting on the charge, looked at my over-cluttered desk and felt serene: I’d read years ago that disorganization somehow indirectly generated creativity—something about the clinical chaoslessness of organization inhibiting the “creative process.” But today, or at least for the first few successive hours of this quasi-fall 10 am morning, I didn’t need creativity. I wasn’t writing a novel; I was writing a review of a novel.

I wanted to write a review of Jordan Castro’s Novel, The Novelist. I had an indistinct and vague feeling that it was ‘good’ and I enjoyed the plotlessness of the plot: it was about an unnamed person trying to write a novel over the course of a morning, and all the aborted half-attempts and external or internal interferences (such as social media, self-doubt, and defecation) that prevent him from doing so, until, towards the middle-end, he does begin to write his novel in the form of a rant against an apparently anti-natalist writer named ‘Eric’, who, I personally inferred, was based on a real-life writer, or, possibly a composite of different contemporary writers.

The first thing I did, after successfully typing the password on the first try and clicking on Google Chrome and watching my 50+ tabs appear, is check a literary magazine’s website to see if they had posted my short story. They had not. And then, even though I did not have Twitter, I checked their Twitter to see if they posted anything about upcoming writing or my story. They didn’t. I felt sad and neurotic—I would do this a few times a day. This relatively ‘trendy’ magazine, which had published some of the best writers so far of the 2020s, had agreed to publish my story two months ago, then, after asking me to change the title, the editors never responded to my (two) emails. Sometimes, I felt this was normal and okay—they had accepted it and that felt good and nice, and the editors were just busy, as all people are: oftentimes, I also took a while to respond to emails and texts—sometimes days—and I wasn’t running a literary magazine. Other times, I felt like I had somehow failed or offended them—like they had accepted my work, read it again, seen my follow-up email, and then wanted to quietly post-acceptance decline it.

My cat entered the room and languidly morning-stretched behind me; I turned in my chair and excitedly patted my lap and said her name with different vocal inflections as if she were a dog: “Cashmere, Cashmere, Cashmere.” She (who, while not being a biological-anatomical female cat, was nonetheless referred to as ‘she’ by everyone that came to the house, because me and my girlfriend initially thought that ‘she’ was a ‘she’ but was later informed by a veterinarian that ‘she’ was actually a ‘he’, and now we joked that she identified as female and was effectively the world’s first transgender cat) came and rubbed her face on my leg. I thought about my cat atop a float in a gay pride parade, wearing a sequins dress with a sash that says ‘Happy Purrride’, being celebrated as an LGBT icon. I thought about the unnamed speaker of Castro’s novel—the pre-novelist—and his tender treatment of his dog and wife. I didn’t know what to say about it, and probably wouldn’t mention it in my review, but did find it nice and sincere.

I didn’t really want to write the review—or didn’t want to put too much energy towards it anyways. I had written a sterile book review of a semi-academic text for a cannabis ‘lifestyle’ magazine and had recently written a review for a book that an academic journal sent me, which, while intellectually stimulating, and, in many ways, fun, was very different from a review of a fiction book. Reviewing a fiction book felt auxiliary: it rendered me a secondary artist, an impotent commentator on what another has done—a critical cuck. I didn’t want to evaluate what another created; I wanted to be the one that creates. I remembered the speaker in Castro’s novel defining what a novelist is: someone whose work possessed an “active commitment to reality.” A reviewer could never be that: the object of the novelist is life itself, a primary mode of immediacy; the object of the reviewer is art: a secondary mode with too many conceptual lawyers, too much distance, making it an artless semi-diagnostic activity.

After clicking the pad on my laptop, and discovering that it was locked, meaning I would need to re-enter my password, wait for it to load, then re-click on google chrome and re-wait for that to load—I decided, instead of waiting, to go roll a joint.

Sitting down in the indoor-patio area of my house—the ‘smoking section’—I seized the bag of cannabis sitting on the table, opened it, smelled it, and put a small-medium-sized nug into the grinder. While grinding the cannabis, I considered why I even wanted to write the review: I intuitively felt that reviewing the novel would make me engage with the book further—instead of being something I quickly read and put on my bookshelf (specifically the second shelf of my five-tier bookshelf; “The Novelist” was a very good book, but it was not life-changing top-shelf material) and forgot about indefinitely, it was something I would need to continue to extract meaning from. Which, aside from the merits of those things alone, could also help me become a better writer.

For the review, though, I knew I’d need to be predominantly negative, so I didn’t come off as naive and it was clear that I was smart—smarter than the author—even though I mostly liked the novel. If I didn’t, I would look stupid and boring: I knew that the best reviews tear books apart in a witty, condescending, and intelligent manner. I needed to expand my criticisms of the book and limit my praises.

A lot was going on in the book—I thought as I dumped the inadvertently too-fine powdery cannabis onto my copy of “The Novelist”—and much of it was directly applicable to my life. The book was, at least partly, a take-down-critique of the ‘literary establishment’, including the underground literary community. I felt like many of these criticisms were warranted and conceptually accurate: there was something dogmatic and banal about the contemporary literary scene with few exceptions. The pre-novelist laments the current state of literature in which every book is reductively relegated to its non-literary qualities (such as politics or philosophy or even morality) and asks why literature even exists if it is always reduced to these elements. He thinks the literary establishment ‘celebrated stupid novels for stupid reasons.’ I thought about my grad school literature classes where books became nothing more than their social aspects, ignoring the totality of the text—the mysterious surplus that exceeded any given theoretical or political reading.

I remembered the writer who is revered by the pre-novelist protagonist—whose name is Jordan Castro and is indicative of ‘problematic’ thinkers who are subjected to web-based vitriol for views that they don’t hold. The pre-novelist’s rant does sound a bit reminiscent of Ben Shapiro or Jordan Peterson. But, I thought, trying to make allowances for the speaker, that the pre-novelist makes this critique seemingly in the absence of any ideological frame. It isn’t these ideas that are ‘bad’ but rather the reductive ideological prism they are usually filtered through (by figures like Peterson and Shapiro) is a little stupid.

There are some slightly banal ‘reactionary’ adjacent views (lamenting the “new meaning” of “racism” and “privilege”)—but these aren’t told through a pre-filtered ideological stance. Of course, there is the argument that there is no such thing as a position in absence of ideology blah blah blah—but I knew what I meant. The author wasn’t an ideologue and was pointing out our sometimes-excessive self-serving cultural egocentrism.

Thinking about the political implications of the novel was boring. I didn’t even want to mention them in my review. Yet that could be the hyper-expanded criticism, that the novel is politically ‘wrong’ or something. I licked the joint and twisted the top and began looking for a lighter. There wasn’t one in the normal drawer nor was there one on the table. Where had my girlfriend put the lighter last? She was at work and had probably taken it with her (my girlfriend always smokes a joint on the way to work). I was lighter-less! My girlfriend had taken our only lighter, not even considering that I would also need to use the lighter. I sat back in my chair, frustrated.

I went to my ‘office’ and found the lighter in the previous day’s pants. My girlfriend hadn’t taken the lighter; I had prevented her from being able to smoke before work. I felt bad.

As I smoked the joint, a few thoughts passed through my head: (1) I didn’t want to write the review which would ultimately be displaced intellectual energy that could instead be applied to other activities, like writing my own novel. (2) “The Novelist” is essentially a meta-commentary on the act of artistic creation and writing. (3) That I should buy a bicycle and chew my food more slowly. I always reminded myself of these last two things (particularly when I was high) and never did anything about it: I’d always wanted to get a bicycle to go around the city without my car and I ate way too fast.

To remind myself of the mini-epiphany, I wrote in my phone notes: Buy a Bicycle. Eat Slower. You Eat Too Fast. Buy a Bike off Offerup for $50.

I absently flipped through my copy of “The Novelist,” as if the rapidly passing pages would somehow imbue me with their concealed inner-kernel of meaning; I thought about my review and how I didn’t want to write it.

Why do people even waste their time writing reviews? Probably because they can’t write a novel, I thought.

“The Novelist” was really about the narrator’s ex-friend, Eric—an anti-natalist who justified terrible positions and behavior through simplified social justice. Eric, who didn’t hold genuine positions, instead used political stances to fill a “void.” Eric, who only read books for their political-social content. Eric, who used the disconnected immediacy of the internet to endlessly criticize, hate, and ‘cancel.’ Eric, who is misanthropic. Eric, who creates nothing. Eric, who the pre-novelist self-consciously recognizes as an aspect of his previous/current self—an understandable human instinct that derives from a lack of meaning and purpose.

I remembered Roland Barthes. Barthes wrote that the critic was also an artist—critics, because they were untethered from immediate reality, were freer than the artist. The relationship the critic has to art is the same relation the artist has to life: these relationships render them both as artists: the reviewer may be secondary to life, but they are primary to art—and this is a position of ultimate freedom. The review itself is an act of creation, I thought. At the critic’s disposal is a different mode of reality to facilitate their creativity (the book). Novels and reviews were both ‘commenting’ or ‘stating’ or ‘interpreting’ something about something—just different somethings. The Reviewer, like The Novelist, requires an ‘active commitment to reality.’

A dull rain pattered outside the window onto the street with grey-white clouds hanging above like macerated cotton balls.

I decided I would write the review.