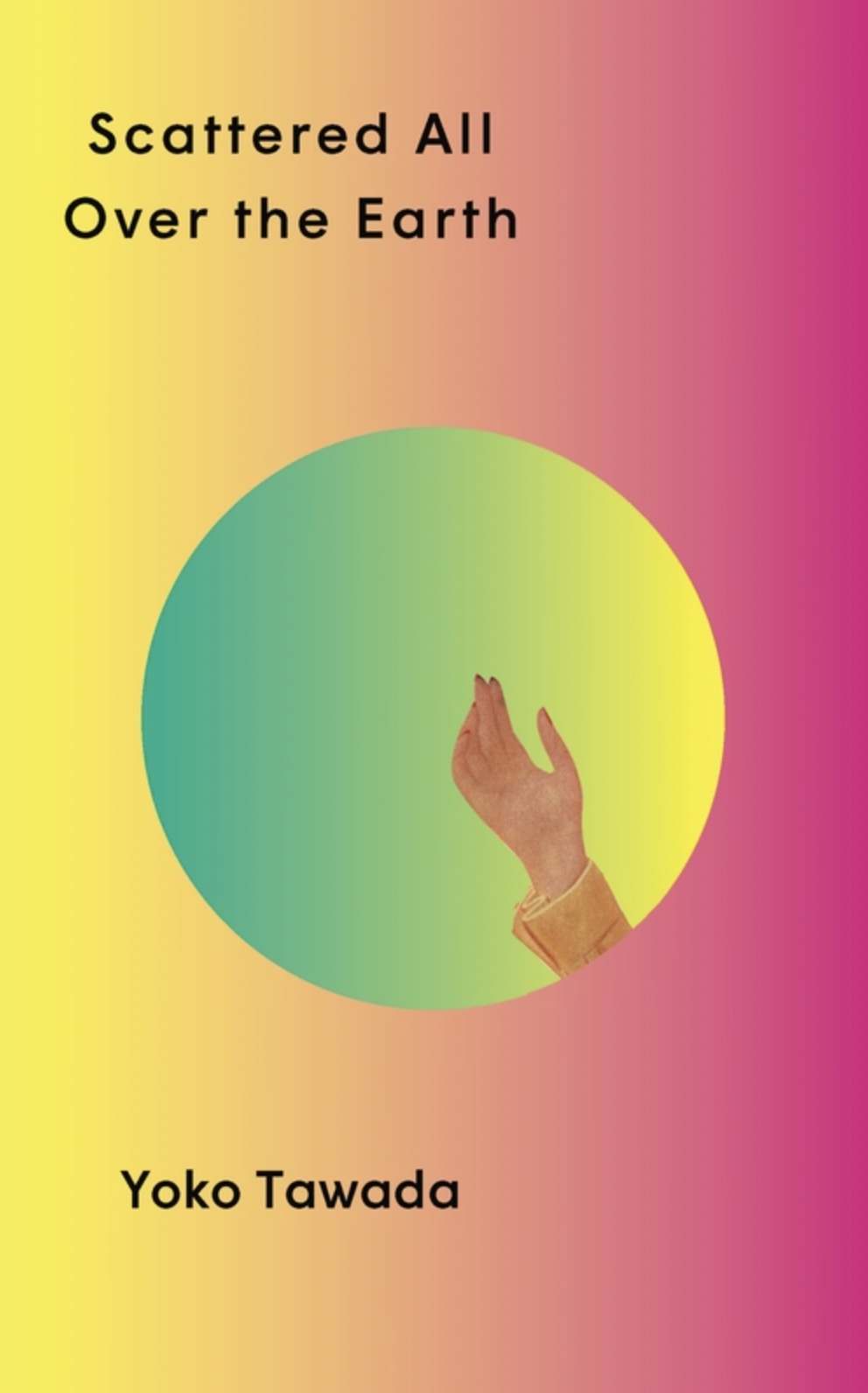 Language is a trident. Its three prongs are culture, community, and imperium. In Yoko Tawada’s brilliant novel Scattered All Over the Earth, translated from the Japanese by Margaret Mitsutani and published by New Directions, her characters explore the perils, joys, and heartache of learning new languages, and of forgetting old ones.

Hiruko, our protagonist, is a folklorist from “the land of sushi.” Sometime in recent history, her home nation of Japan sank into the sea as a result of human-driven climate change. Now a climate refugee in Denmark, her goal is to find other survivors from her homeland, hoping not to forget her native language. As she encounters others who speak Japanese, she is able to recover some memories of her home–the words for morning, mountain, and sky. In her search, she sees traces of her lost homeland all over Europe: in sushi restaurants, and in their kitschy Japanese names meaningful only to her. These fragments force her to confront the concept of authenticity: if her homeland is gone, who is left to decide if a sushi restaurant is authentic? If Mt. Fuji is no more, is this sushi restaurant whose name means “Fake Fuji” now the real Fuji? One of the few remaining members of a shattered culture, Hiruko seeks out her compatriots to recall what has been lost, and to determine how to integrate it with what has been found.

In her journeys, Hiruko attracts many traveling companions. Each chapter is told from a different perspective, among them: Knut, a linguistics student from Denmark; Nanook, an indigenous Greenlander who is so often mistaken for Japanese that he just rolls with it; and Akash, a polyglot trans woman from India. Of such disparate upbringing, the adventurers would have no capacity to interact with each other if not for their efforts in learning each other’s languages. Tawada renders with beautiful immediacy the selfless and heartwarming effort of someone learning an entirely new language, just to talk to you. She also shows us the difference between intelligence and fluency–we see many examples of rich narration followed by broken attempts at speech, as well as the opposite. Hiruko, daunted by the task of learning so many Scandinavian languages, has invented her own: a halfway-mutually-intelligible amalgam she calls Panska. In a chapter from Knut’s perspective, reflecting on his first encounter with Hiruko, he recalls:

The first time I heard Hiruko speak, the smooth surface of my native language broke apart, and I saw fragments of it glittering on her tongue. The homemade language Hiruko spoke was like Monet’s water lilies. The colors, shattered into pieces, were beautiful but painful.

This is a rare book where the translation not only conveys the narrative, but constructs a metanarrative as well. Mitsutani’s sparkling prose adds a new and different focus to the book’s multilingualism. The translation invites its new English-speaking audience to consider both the global community forged by the English language, and the violence by which it propagated. We learn early on that Hiruko must conceal her English fluency for fear of deportation. She tells Knut, “english speaking migrants sometimes by force to america sent. frightening. illness have, so in country with undeveloped healthcare system cannot live.” Within the almost comical, absurd-yet-plausible imperialism in reverse which pays no heed to the lives of those affected, I couldn’t help but see hints of my own monolinguistic upbringing. Even to those who have arrived in America against their will, our society exacts a mainstream demand to speak English–a foreign language to our stolen land.

Tawada’s sensitivities to the loss of language–and her knack for its transmutation–may be rooted in personal experience. She has been a Japanese expat in Germany for forty years, and has won numerous awards for her writing in both languages. At the center of her work are words, worlds, and the borders they straddle–in her writing we see the closeness of hearts, and the fallibility of the barriers between them.