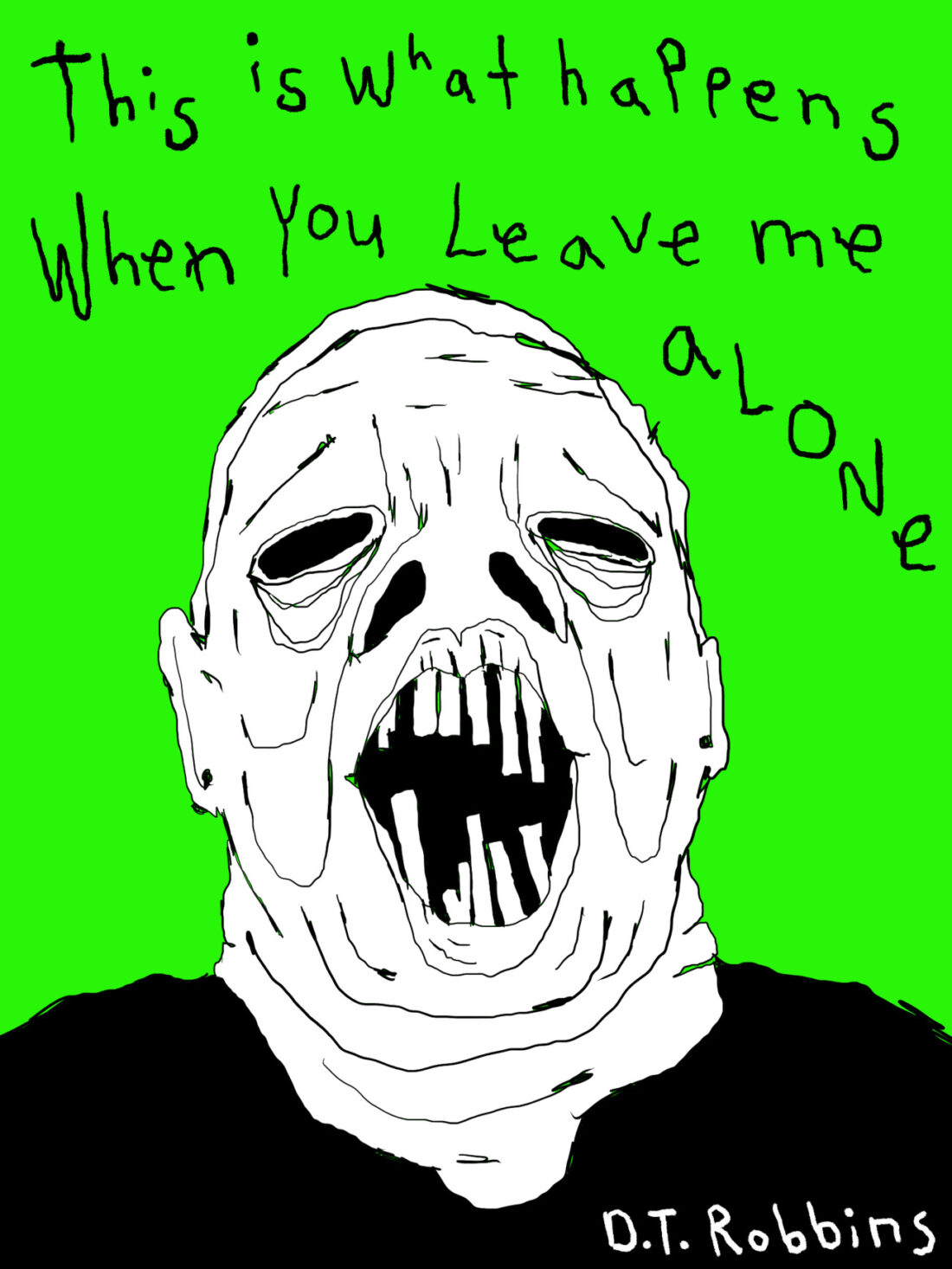 Nothing In Life Matters: a review of This Is What Happens When You Leave Me Alone by D.T. Robbins

I’m getting beat up over here trying to decide if everything is lame and pointless or if that’s just a condition of my being a millennial. And if something is possibly not lame and pointless, what would that thing be and should I be pursuing that thing? I don’t feel any connection with most worldviews and sometimes I think they do more harm than anything else. I think we should just write and say ‘fuck it all’ and accept the lame pointlessness of our being.

I have no idea how many other people feel this way currently but I can vibe that D.T. Robbins might be one of them. I feel connected to this collection he wrote. I can’t call it lame or pointless. It’s raw and unflinching and fun as hell to just read. This is What Happens When You Leave Me Alone is an example of what Late Capitalism and the internet does to a human’s mind. You can see it from the cover. The green pops and the face is like looking in a mirror. That is if a mirror could reflect your emotions. It’s chaotic and chill all at once. There are way too many bits of this collection to love. From “You Can Write Anything and Call it a Poem” to “I don’t want the world to see me,” this collection drips. Also, major shout out to D.T. Robbins for remembering that random “S” thing that we all drew back in high school. I still don’t know why we all drew it and I’m hoping that after this review he might have some answers for me. But that’s far from the point if there actually is one. This isn’t a book to read if you’re looking for something conventionally eloquent or esoteric. It’s on the surface and it isn’t about you. It’s about Robbins coming to terms with his life. In a profoundly honest way, these poems navigate a man’s life in the midst of an existential crisis. He is nostalgic, anxious, and REALLY into pop culture. The nexus of all those things is what makes This is What Happens When You Leave Me Alone truly mind-blowing. It’s meta modernist. Through his nostalgia, D.T. Robbins provides a vehicle for us to better understand relationships, parenthood, and the awkwardness of being alive.

Though it appears simplistic, the words are inherently filled with deeper meaning. Like Lenny Bruce, Robbins manages to make us laugh and think critically at the same time. I could imagine that if they were in the same time period that they’d actually be close friends. Talking trash about the mainstream and not afraid to show the gritty nature of themselves. Robbins definitely isn’t afraid at least. Check “Pro Writer Tip VII.” Cancel culture doesn’t jolt him. It’s just another thing that adds to the chaos in his life which he doesn’t seem to mind. I can go on and on about what different poems in this collection meant to me but then I’d be writing forever and that just wouldn’t be fun for anyone to read.  Or productive. And our society demands some semblance of us acting like productive beings that are focused on commerce and not old movies that we loved. But I say ‘fuck it all’ and read this book.

I can promise there will be at least one poem in it that will make you smile and remember weird things about yourself. For me, there were at least 20…

You can order it from Rejection Letters Press