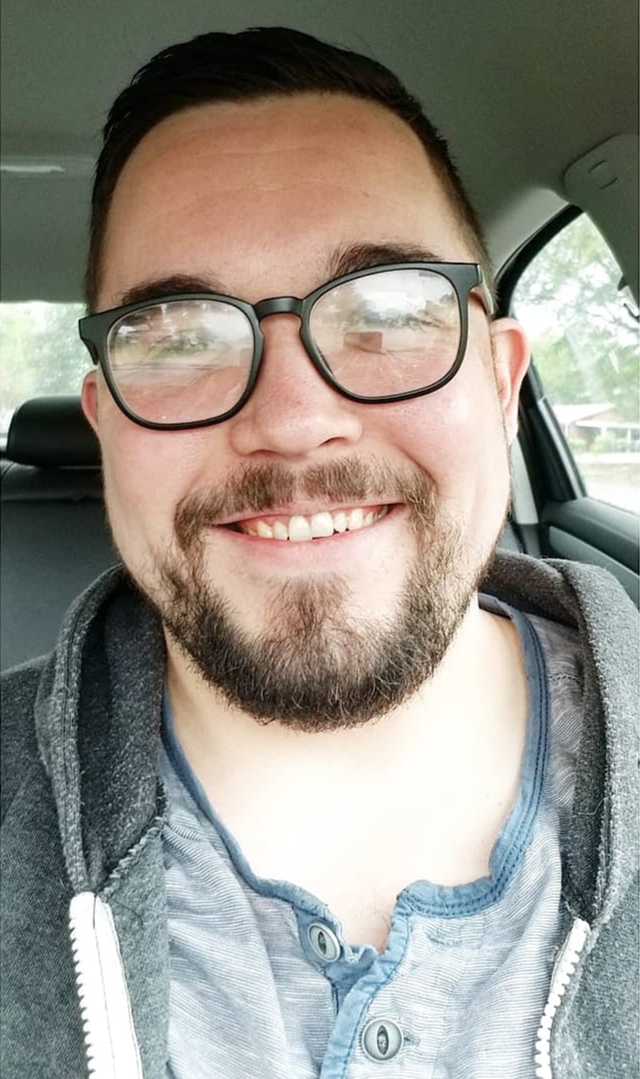 Chains of Causality Intersecting: An Interview with Nick Olson

Nick Olson’s debut novel occupies an important space in the psyche of American fiction. Spanning sixteen years in the life of Waldo Collins—who isn’t quite Holden Caulfield as much as a nerdy, lower-middle class kid growing up in the suburban shadows of Chicago—Here’s Waldo (Atmosphere Press, 2020) is a testament to disenfranchisement. A story of loss, trauma, recovery and struggle, which serves as a reminder that being the smartest person in the room will not always save you.

Below, I speak to the author about growing up in Des Plaines, Illinois, pastiching memories from lived experiences, and the underrepresentation of class in contemporary literature.

Hi Nick, and thanks so much for taking the time to talk with me! Where are you writing from, and how are you holding up?

Thanks so much for having me! I love Maudlin House, and I love your work, so it’s a real honor. I’m writing from Winston-Salem, NC. I feel I’m holding up about as well as I can right now. Weathering the storm in my own way, mostly through writing and editing over at (mac)ro(mic). Stories have always been my refuge, my way of making sense of the world, so I’ve found my way back to them as I always do.

I know the timing is less than ideal, but how does it feel, to have your debut novel coming out in the world?

It’s strange, because it somehow feels right for this book. This novel was born out of trauma, and it’s very much steeped in that idea of facing the past in order to deal and to move on, so I weirdly feel that it’s an appropriate time for it. Waldo’s formed as much by hardship and struggle as he is by his relationships with others, and I feel we can all relate to hardship in this bewildering present, can find some meaning in deconstructing the things that made us who we are, and hopefully figure out where we want to go from here.

Here’s Waldo is out via Atmosphere Press. Could you tell us a little bit about the process of finding a publisher? What was your journey like?

It was a definite labor of love. I started this book the day after I graduated college, back in 2014. After finishing it and getting it sub ready, I queried widely, found representation at one point, and got some promising looks that ultimately didn’t land, as these things happen. I parted ways with my agent and went after some indie presses on my own, and Atmosphere Press loved my pitch. After six years of working on this thing, I can honestly say that Atmosphere is the best place that Here’s Waldo could’ve ended up at. It’s been an actual dream come true, start to finish, working with them on this.

I remember reading your story “Brought to Shore” in SmokeLong Quarterly a few years ago, and this book, in so many ways, feels like a continuation of it. Was Here’s Waldo born out of “Brought to Shore”? If so, did you have any sort of inkling that it was going to lead to a longer work?

Wow, you remember that! That is really cool. Also, you are completely spot on. Back when I wrote “Brought to Shore,” I was still in the early days of Here’s Waldo, still figuring out the characterization, the tone, and the overall shape of it. Landing even a snippet of that story, with the same characters and all, at SmokeLong Quarterly gave me the creative boost to keep going, made me realize that this was a story that might resonate with folks. It meant a lot to me, and so does the fact that you remember it!

How long did it take you to write the book?

The first draft was finished in about a year and a half, but that was of course only the beginning. That first draft was about 100,000 words but didn’t yet have any of the interlude chapters that allowed me to explore POVs other than Waldo’s, so it took years of cutting, rewriting, and editing to get to the final version that sits around 78,000 words now. It took a lot of living, a lot of facing trauma in my own life so that Waldo could more accurately do the same in his story.

Here’s Waldo is divided into 89 bite-sized chapters that seamlessly flow into each other with magical levels of association—it’s almost as if they’re a handful of memories pastiched together. Could you speak a little about the book’s connective tissue?

What you just described is exactly what I was intending, so it’s great to hear that it worked! In terms of chapter length, I took inspiration from Cat’s Cradle. I love everything I’ve read of Kurt Vonnegut’s work, but that book especially had me turning pages in a way I usually don’t. I was just then getting serious about writing flash fiction, so it felt natural for me to write chapters that could almost work as standalone flash pieces on their own. But then of course linked together, they hopefully cohere and form a greater whole. I’m very interested in memory and how we use it in the construction of self, in how all of these snapshots that make up who we are and seem so disparate and unrelated at the time are really all forming this causal chain that makes up a life. And then of course in the interlude chapters, I tried to explore how those chains of causality intersect across location and generation, across time.

You do a stellar job of inhabiting different POVs in the book—there’s Mom and Dad, yes, but there’s also Waldo’s best-friend, Rodhi, and his mother, Maya. I’m particularly curious about Maya’s interlude. What kind of research did you do before writing from the perspective of an Indian woman?

Thank you so much. That was something that I worked really hard at and took very seriously, so I really appreciate that. Many of my best friends growing up in unincorporated Des Plaines were Indian American, and I was privileged to be able to learn so much about their culture and families while hanging out at their homes, to learn about their parents and where they’d come from, what they’d gone through to get here. I was dismayed to see the bigotry against them and their families, especially after 9/11, when they were othered and mistreated even more than they already were. It was important to me that even though I can’t speak to that experience, I can at least try to speak to what I saw and heard growing up, to craft as accurate a depiction as I possibly could. So a lot of that was direct recollection from my childhood, but then I augmented it during the writing of the actual book with a lot of research on culture, place, time, religious custom, language, food. As much as I could to get it right.

You write extensively about the landscape of Des Plaines, Illinois. I wonder, do you find your own setting to inform your work? If so, is that a deliberate choice, or one born from happenstance?

Absolutely. Not to be too corny, but I basically tried to write the book that I always wanted to read when I was a poor kid growing up in the torn-up part of Des Plaines, IL. I was reading all of these stories that dealt with themes I’d end up exploring in my own work, things like memory and trauma, recovery and struggle, family strife and reconciliation, but I could never really see myself in a lot of these upper middle-class depictions. Nothing against anyone who grew up that way, but I just wanted a story that wrestled with my hometown as much as I have over the years. And I guess I hoped that even though not everyone grew up in Des Plaines or even necessarily knew it existed before reading my book, that maybe they can find some of the universal in the particular.

Why do you think class is so underrepresented in contemporary literature?

That’s a great question. It’s something I struggled with before I had the words for it growing up, and it’s something I still grapple with now. I do think that it’s starting to get better, especially with all of the incredible #OwnVoices stories that have been coming out lately, but we still have a ways to go, I feel. Representation is so important, and I think we’re starting to see our stories catching up with our lived experiences, but for the longest time that simply wasn’t the case. I don’t know if it was perceived that there wasn’t a market for stories about folks living in the lower middle class, but there most definitely was and is. I had an old friend reach out to me recently about Here’s Waldo, and he told me that what I’m doing is giving us DP kids hope. That meant the world to me, and it would’ve meant the world to me if I had a book like this growing up. The more we actively work at broadening our perspectives, and by extension our stories, and the more we challenge the ways in which we tell them, the more kids like me there will be, sharing who they are, what shaped them and how. It’s exciting to me to think about how many stories are out there right now, seeding in the minds of folks who have been through so much and made it through to the other side, just waiting to bloom. I can’t wait to read them.

This is always a tricky question, but one I feel obligated to ask: what are you reading at the moment?

It is tricky. I find I’m not reading as much long-form fiction, although I did just recently start reading Charlie Kaufman’s debut novel Antkind, which so far is as weird and wonderful as his films are. But I’ve been diving head-first into flash, CNF, and poetry lately. There is so much incredible work coming out right now, so many new mags doing really exciting things. It’s heartening to see that in the midst of all this pain and hardship, there are so many folks looking to read and share the work of others, to lift up voices unlike their own and fight for inclusion and understanding, kindness and empathy. It is so desperately needed.

Lastly, do you have a favorite independent bookstore you’d like to recommend to our readers?

I have two! In my first home of Chicagoland, there’s a wonderful independent bookstore called Bookends & Beginningsthat is so near and dear to my heart. In my second home of Winston-Salem, NC, there’s a place called Bookmarks that’s absolutely wonderful. Both are selling my book via Indiebound, and I’d already loved them both for years, so it makes my heart happy to plug them. Thanks for the opportunity!

Thank you for your time, Nick!

Thank you so much for your wonderful questions, Gauraa. This was great!

Here’s Waldo will be released October, 2020 via Atmosphere Press. Click here to pre-order the book.