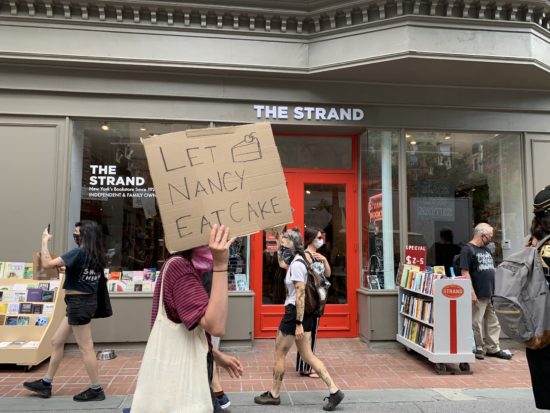 Come Wait in Line and Buy Some Books: An Interview with ‘Strand Bookseller’ Brett Bates

On August 23, a week after Prime Day, Nancy Bass Wyden, the third-generation owner of New York’s iconic Strand Book Store, took to Twitter. “We need your help,” she began. “Never did I imagine that the store’s financial situation would become so dire that I would have to write friends and devoted customers for help. It hurts to write this, but that is the predicament we are now in. The Strand’s revenue has dropped nearly 70% compared to last year…our business is unsustainable.”

While this statistic is not untrue—bookstore sales have declined 31.6% since the pandemic struck the U.S. in March—it soon came to light that Bass had recently invested approximately $115,000 in Amazon stock, an amount that would have employed all of the Strand’s union members who lost their jobs in March and July.

If you’ve spent some time in New York City, it might be difficult to disentangle personal sentiment from the Strand. Reading this now, it might be tempting to look in the other direction, to take your money elsewhere, anywhere but the pockets of the multimillionaire senator’s wife. Yet, the situation is more complicated than that.

Below, I speak with Brett Bates, who has been working at the Strand as a bookseller for the past four years, about daily operations, the transition of ownership from Fred Bass to Nancy Bass Wyden, and the best way to support Strand booksellers and union members at this time.

Hi Brett, thank you so much for taking the time out to chat with me! Where are you writing from, and how are you holding up?

I am writing from my apartment in Queens. It’s my weekend, so I am doing well.

Could you tell us a little bit about your experience working as a bookseller at the Strand during Covid-19?

It has been extraordinarily stressful compared to any other time working there. Most of my co-workers (many of whom I would also of course consider friends), are still laid off. Meanwhile, we are categorically understaffed and overwhelmed at the store, even with managers and scabs doing bargaining unit work.

What did daily operations look like for you, as Strand transitioned from Phase 1 to Phrase 2? Were social-distancing protocols being mandated? Was there enough personal protective equipment and cleaning supplies? Did you feel safe coming into the store?

Fortunately, we have had enough PPE so far. We have always had enough masks, gloves and hand sanitizer, as well as disinfectant wipes, things like that. That said, getting the store to faithfully carry out its own health and safety plan has been an uphill battle. For example, getting enough acrylic screens installed on employee work stations took repeated requests and meetings over multiple weeks. Currently, our chief concerns revolve around the store’s enforcement of the mask policy for customers, social distancing at the registers, and making sure the occupancy level at the store stays where it has to be. Management assures us this will all be corrected going forward. We are hoping that’s the case, but will of course keep a close eye on it this week.

How long have you been working at Strand? Could you tell us a little about the transition of ownership from Fred Bass to Nancy Bass Wyden? What did that look like for booksellers in particular?

I have worked at the Strand for four years. Fred was not as engaged in the day-to-day affairs of the store when I started as he had been in the past. He spent most of his time at the buying desk, looking through the second-hand books that are the bread and butter of our business. But he knew the store. I remember once I was instructed to take the ancient Greek philosophers out of the store’s Greek and Latin section, and move them to our Philosophy section downstairs. I was told this was Fred’s idea. I went to school for philosophy, so I sort of respected his attention to something that specific (I was also of course amazed at this opportunity for my philosophy degree to be of some practical use outside of academia). Nancy doesn’t seem particularly interested in the books, or in building relationships with those of us who talk about them and handle them all day. This is not a sin of course (despite what some of our tote bags and magnets might imply), but the upshot is that some pretty consequential decisions are made about the functioning of the store that do not really take its workers’ opinions into account. It’s too often a unilateral process that many of us find extraordinarily frustrating.

I came across the @strandbooksellers account on Instagram, which, starting August 2, demonstrates Nancy Bass’s “continual contempt for her staff and a callous disregard for our well-being.” Could you tell us what the impetus was for starting this account?

So I actually cannot tell you too much about this account, because in a way it was started specifically to speak for itself! For context, I am a shop steward with the union at our store. I (increasingly it seems) do meetings or “press” like this, on behalf of the workers. But there was a desire for the rank and file to have a channel to express themselves freely. So that account is not a source for official union communication, as it were.

The account also states, “On July 7th, while on vacation at Martha’s Vineyard, [Nancy Bass] Wyden ordered the layoff of 12 workers who had been rehired two weeks prior”. A week later, Strand opened a new location at 450 Columbus Avenue, not too long after laying off these workers. What was the general morale at the store like at this time?

The morale was far and away the worst it’s ever been since I started working there. For context, our basement floor (where I mainly worked before the pandemic) flooded a few years ago when a pipe burst, and we also had a wall blowup due to a freak manhole explosion. We had to work around that (and indeed help clean it up), so we have been disgruntled before to say the least. But yes, after the second round of layoffs and the new store…it was a different level of frustration all together.

On October 23, Strand officially announced their “revenue has dropped nearly 70% compared to last year, and the loans and cash reserves that have kept us afloat these past months are depleted.” What was your reaction to this press release?

It’s clear that our sales have dropped significantly. We were a tourist destination to some degree (especially in the summer), so in an awkward way it would be scary if we had the same traffic as before. But we also know that, in Strand’s case, things are definitely not so straightforward. The owner of our store also owns the building, and she opened a second location during all of this. But, of course, the stocks loom largest. One month of her stock purchases could potentially employee all of our union members who were laid off. So it is difficult for workers to completely rally around this cry for help since she, quite literally, doesn’t invest in us.

Could you tell us a little bit about Nancy Bass’s relationship with the union?

We do not deal directly with Nancy very often. It is almost always with upper management, or, more recently, her lawyers.

How can we help support Strand booksellers and union members at this time?

We do want people to come shop at the store. If you want to support union jobs, come wait in line and buy some books. You can even buy a tote bag as far as I’m concerned. But do so conscious that the workers there are struggling. You can also keep an eye out for us going forward, both in the press and from the @strandbooksellers accounts.

Is there anything else you’d like to bring to our reader’s attention?

Most of our members lost their jobs and health insurance during this pandemic. Some of them supported families, some of them have been put in very vulnerable positions. And some of their jobs are now being done by scabs and managers. We are fighting the company about this, but know that when you’re in the store, it’s missing some of its most important people.

Lastly, are there any independent bookstores in New York City that you’d like to recommend to our readers?

Topos (Ridgewood) – get coffee, talk to a cute boy about Roberto Bolaño; also did some mutual aid support during the pandemic which was great to see.

East Village Books – books but also one of the best selections of prints and photographs in the whole city; last time I was in here instead of music they just played an entire recorded interview with Malcolm X; a great store.

Thank you so much for your time, Brett!