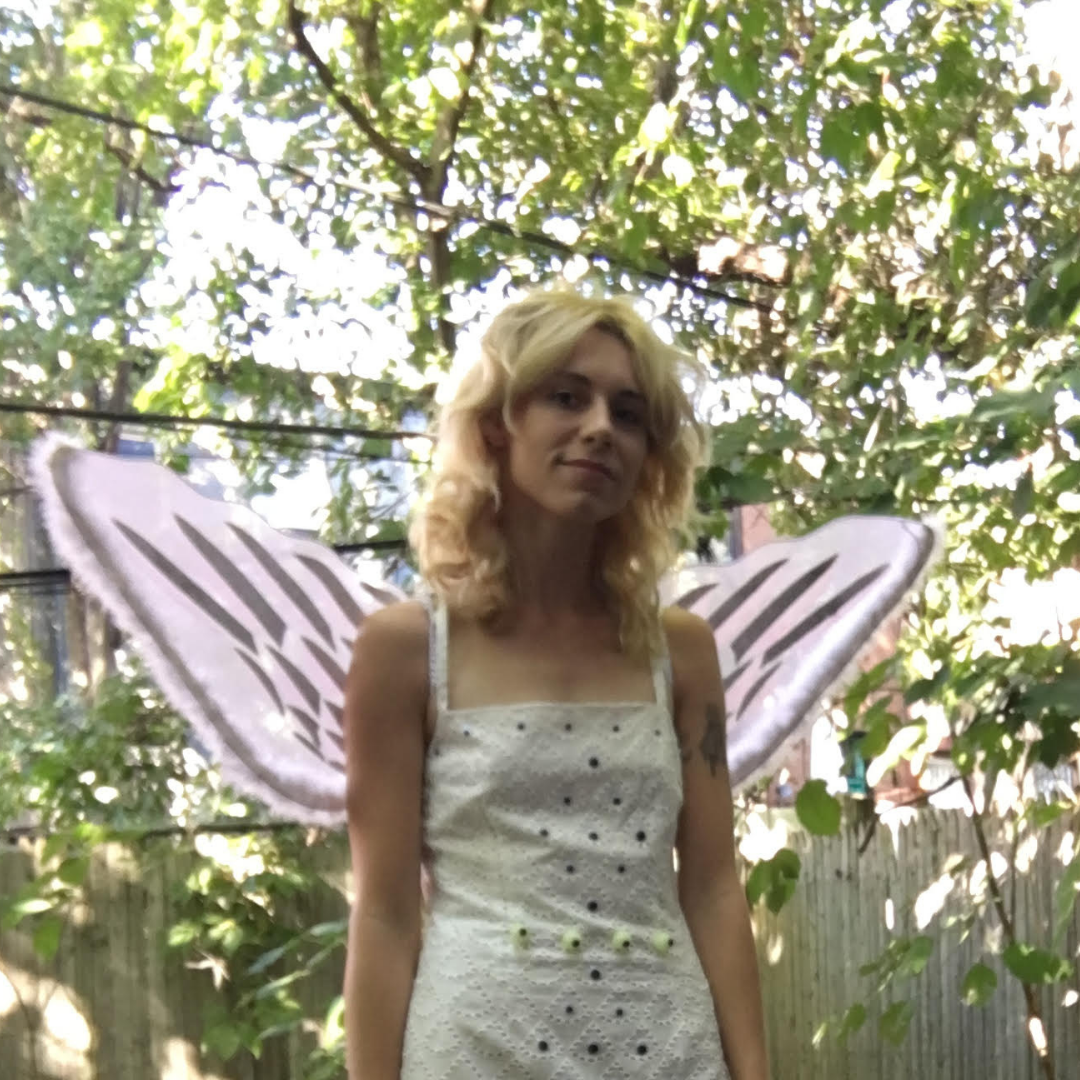 I Villainize Myself: An Interview With Shy Watson

There are few collections as charming as Shy Watson’s Horror Vacui (House of Vlad, 2021). Divided into three sections—Poems, Waking Dreams, and Quarantine Diaries—these writings come together to form an honest and authentic portrait of the self as indefinite. Each poem takes the reader inside a personal experience: a passing fondness for the florist on Fulton Street is elevated to familiar sensibility in “MET poem 3”; the openness of “DREAMY” pulls a distant memory closer; “extreme makeover: home edition” softens disappointment with vulnerable hopefulness. In each line, Watson threads narrative with intimate detail, leaving enough space for the reader to project unselfconsciously.

Below, we talk about Horror Vacui, people and place as influence, and the difference between her real-life self and her first-person self on the page.

Shy, thanks so much for taking the time out to chat with me! Where are you writing from, and how are you holding up?

I was about to say “I’m not writing,” but then I realized you meant the interview! I’m in Philly right now, but back to New York tomorrow. I recently moved to Ridgewood from Bed-Stuy. I’m doing well! I had COVID earlier this month, but I recovered, and the switch from sick to healthy has made me really appreciate the health.

You grew up in Missouri, went to college in Philadelphia, and later spent some time in Seattle, Denver, and Portland. You write about wanting to move to Los Angeles. How did you end up in Brooklyn?

I also went to college in Boulder! And lived in Kansas City. And Chicago. And Amsterdam. I no longer want to move to LA, but I wouldn’t be surprised if I do eventually. I moved to Brooklyn by way of Philadelphia. I’d ride the Chinatown bus into New York and hang out with my friend Theo. They showed me Brooklyn more than anyone else did, and when my lease in Philly was up, I knew I had to move. The literary scene is just so much bigger in New York than in Philly. That being said, I’m moving to Montana in August.

How do people and place influence your work?

Entirely! Today I saw a headline for an article that said we are each the average of the five people we spend time with most. And place is everything, because it’s atmosphere. I only know what I experience, so I’d give people and place full credit.

Where do you write usually? Has this changed since the pandemic?

Bed, and no. I have a desk, but its primary use is a junk drawer.

There’s an exquisite line in Horror Vacui I haven’t stopped thinking about, that, for the life of me, I cannot find again. I’ve re-read the book at least four times now but I believe it says—and pardon me for my terrible paraphrasing—people tend to sort people by good and bad, when they could be sorting them by charming or tedious. What do you find tedious or charming in a person?

I didn’t write that! Maybe you were watching something while reading Horror Vacui, and it slipped in through osmosis? I find people who constantly gossip and use those around them for emotional labor tedious. Also people who do lots of cocaine. And people who don’t listen when others are speaking. I think kind people and charming, quiet people with good intentions. Honestly, I am easily charmed by anyone who isn’t obnoxious or dramatic.

Oh god, I feel mortified to have misplaced that line! I realize now that the quote is from Oscar Wilde’s Lady Windermere’s Fan, which I was also reading at the time. It’s strange how certain phrases stick with you and—like you said— slip in through osmosis. Is there a particular work or author that keeps coming back to you when you’re not actively trying to think about it/them?

I wish the answer were yes because that would be more interesting, but my memory for quotes isn’t too great. I always have songs stuck in my head, though. I’m always walking around and singing them. In lieu of a good answer here, I’d like to direct readers to Gemini (Birthday Song) by WHY? I love the lyrics and they get trapped in my head relatively often.

Your work has an immediacy to it, a sense of fullness and urgency—almost like it’s being written in the moment as opposed to after the fact. Do you keep a diary on the regular? Do you write down notes on your phone as you’re walking around? How regimented is your process of documentation?

I rarely journal anymore, but I should! My poems work well as journal entries though. I do type notes into my phone, but not that often. I think part of living a full and urgent life is being present. I have faith that I’ll remember the interesting details.

I keep coming back to the 4/27/2020 entry from the Quarantine Diaries section of the book. Toward the end of this entry, you mention that you had solved a story you’d been working on: “…it hit me, exactly what I needed to do. I don’t want to publicly express what it was, but I will say that I didn’t even know about it.” I’m intrigued by the idea of audience here. Were these entries written specifically for the book? Do you write with a specific reader in mind?

I wrote them for Newest York’s blog, so I knew people would be reading them. I turned one in once a week for a while, until George Floyd was murdered, then I figured there were more important things for people to be reading. I don’t usually have a reader in mind while writing. But sometimes I write for whoever I’m dating as a, like, courting mechanism.

Do you typically write a poem in a single sitting? Or is your process more piecemeal, involving several drafts and rounds of edits?

Single sitting for sure.

Having painted, no longer having the patience to paint, wanting to be a famous painter—these ideas crops up often in Horror Vacui. When did you pivot from painting to writing? How do the processes differ for you, and do you think writing is perhaps better at feeding off of impatience than painting?

My intense painting phase was actually very brief, when I was 23. I probably made about eight paintings that year, maybe two since, and zero before. I was good at it! My Instagram for that is @lazywednesdayz. But I’ve been writing forever and never stopped for more than a few months at any given time. Writing poetry is definitely best for the impatient. Painting is worse. But fiction might be the worst of all three.

In the book, you mention workshopping poems with a friend, and you’ve tweeted about MFA programs in the past (congrats on the UM acceptance!)—how important is a writing community to you?

I can write without community, but community makes it more exciting. Most people are smarter than me, so I value feedback. And I like to party. And talk to writers. Writers tell the best stories, and they’re the only people who can make me laugh.

Do you think your real-life-self and your first-person-self on the page converge? How are these selves different or alike?

I’m harsher in my writing—I villainize myself. In normal waking life, I’m pretty patient with my thoughts and actions. My inner poet converges more with my inner critic than my general ego.

There’s a lot of music in these pages—Destroyer shows, The Magnetic Fields, Bright Eyes. Do you listen to music as you write? What have you been listening to lately? What was the last show you’ve seen?

I probably do listen to music as I write, but it’s like when music is on while you’re at work; it falls into the background. When I edit fiction though, I blast it. I’ve been listening to Rilo Kiley and Brian Eno lately. I need new music recommendations if anyone wants to send them.

I love that you’ve been listening to Rilo Kiley! They’re one of my favorites, and Horror Vaccui (the poem “tony #1” especially) reminds me a lot of The Execution of All Things—the same sense of immediacy and unselfconscious vulnerabilty. What do you find you gravitate toward most in songwriting?

Definitely lyrics. I grew up listening to a lot of Bright Eyes. I love poetic lyrics and lyrics that tell a story. The Decemberists were fun to listen to when I was a kid, too, Belle & Sebastian… Jeffrey Lewis is also great at telling stories through lyrics. My favorite band has been Of Montreal since I was twelve—Kevin Barnes is a brilliant songwriter. I also like songs that teach me things, which is very much the case with Of Montreal. Kevin’s lyrics taught me who Bataille was, so I read Story of the Eye when I was like, 16. Also watched Valerie and Her Week of Wonders because of OM. Not to mention, the first time I left the US I traveled alone all across Scandinavia, solely because of how romantically Kevin Barnes writes about it in his songs. Thank God he sang about Norway.

You’ve mentioned in the past that you’re working on a novel. Could you tell us a little bit about it?

It’s about an 18-year-old McDonald’s employee in rural Missouri who gets kicked out of her alcoholic mom’s house the day after high school graduation and moves in with these older boys, where she sleeps on an air mattress, does drugs, falls in love, and saves up enough money to leave.

Who are some past and contemporary novelists you admire most?

Oof! I feel like my favorite writers do short stories. Like, I just read Brad Phillips’s book Essays and Fictions, and Elle Nash’s short story collection, Nudes. Both of which were so great! I also love Ottessa Moshfegh. Her novels are good, but her short stories are really where it’s at. Mary Gaitskill is wonderful. Dodie Bellamy blows my mind. Georges Bataille. Novelists, novelists, novelists… Scott McClanahan? Sarah Gerard. Clarice Lispector.

Lastly, are there any independent bookstores you’d like to recommend to our readers? Topos in Ridgewood, my new neighborhood spot. And Burly Books, the spot near the Bed-Stuy apartment.

Horror Vacui is out now from House of Vlad, and available for sale here.