She is the editor-in-chief at Sugar Rascals and has had poems published in Ninth Letter, alien mouth, and Big Lucks among other places. Her work has been nominated for Best New Poets, and has been recognized by the Scholastic Art and Writing Awards, Hollins University, the Keats-Shelly Memorial Association, the League of Canadian Poets, and Columbia College Chicago. She believes that she deserves a cat.

Selected Works: “Home, Oven”, “They Say Ithaca isn’t the Only Place Where Husbands Don’t Come Home”, “How to Look at the Sun”, “The Moth”

He is no ordinary writer. He is made up of and controlled by a series of shattered machinery helmed by insecurities that come together to form the R.O.N. (Relatively Ordinary Nuisance) ™ Mattel. Together, these insecurities fight the forces of evil in the universe by cowering and sending tear-stained, strongly-worded letters to the offending parties. You can follow their misadventures at @sirabsurd on the Twitter wires.

Selected Works: “Birthright”, “Around the Bend”, “The Fisherboy”, “Death and Life in the City of N”, “Second Goodbye” 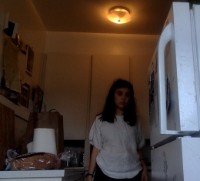 She writes poems and sells houseplants in seattle, washington. She likes museums, mountains, beer, and her poodle, tony. She is a web poetry editor for hobart pulp. She grew up in illinois and won’t shut up about it.

She writes poems about loss, growth, love, death, what it feels like to be temporarily alive, etc. etc. etc., but also about dogs and plants and trains and other more easily digestible things. She is mostly interested in traveling and figuring out how to be an adult.