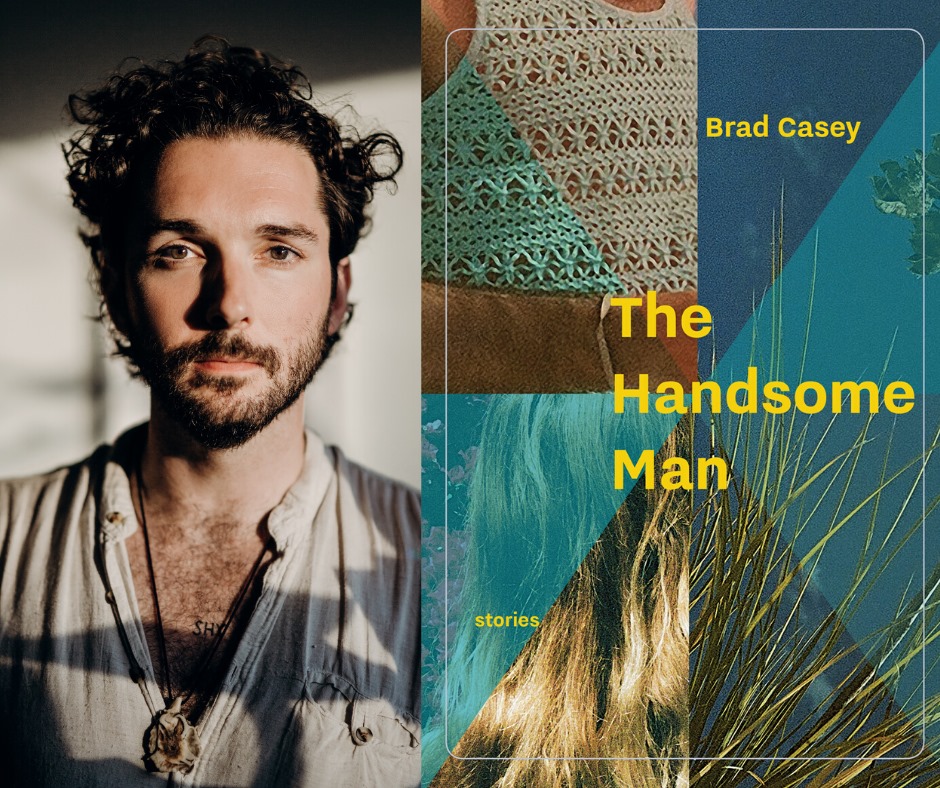 When the world is upended, where will you go? Will your mind linger and wonder what’s next? Will the inertia and beauty of everything give you comfort? Or is there something more? Something beyond the nostalgia hanging above your head like a halo that gives life to who you are?

These are only a few of the things that you will be left pondering after reading The Handsome Man by Brad Casey. The fantastic press that published it, Book*hug Press, categorizes The Handsome Man as a short story collection but the stories are really more vignettes of just the one Handsome Man. A thing that might’ve been better demonstrated in novel form rather than in these sometimes broken linked scenarios in which he finds himself. But the scenarios are beautiful which makes its quirky style, lovable. They are interconnected stories that follow the life of this Man, linked together not just by their protagonist but also by the desire to reveal the concept of what dissatisfaction is in our 21st-century world. We shadow the “Handsome Man” through several years of his life as he absconds from one place to the next. At times seeming like a character right out of a Jack Kerouac novel, he jumps around to places like New Mexico, Canada, New York, and even Rome. His travels and experiences are endless. Each new place is packed full of unique people that fit the indie theme of that place. One could imagine the “Handsome Man” arriving at each destination and asking, “where is the hipster part of town?” only to be dissatisfied and disconnected once he arrives. No healer, movie star, or old friend could allow him to feel faith and trust in another soul. Few writers can cram so many forms of detachment and loneliness into so few words but here, Brad Casey shines.

Time and time again, Brad manages to highlight all the uncomfortable, frantic, self-conscious splendor of trying to be alive in a world that wasn’t built for you. His words echo with a kind of truth that can either inflate you or break you. We are alone but we are not. A tender world of 8 billion people, here together, trying to stay out of each other’s way. Brief words are only spoken out of love or necessity. A generation constantly trying to evade the flat structures of acceptable forms of communication. This is not a bad thing. We are growing. Evolving. Our lack of words is an unspoken agreement amongst each other. A code that says, “Come talk if you want, but I will never make you.” Brad says it best: “What’s more brotherly than not talking?”

Through all the sad and distant thoughts thrust onto this one character one would assume that this is a novel to avoid, especially in times like these. But these are the prominent feelings of adulthood. A stage in life that we all need to accept. The title of the book could be bleak and say that but instead, it gives us a hint of the beauty that resides within the pages. Perhaps something lavish, or sexy, or cute. Words like “handsome” bring those thoughts to mind. Others might think of the word as shallow and at many times our main character seems it but in actuality, his handsomeness is not describing his attractive physique. It is marking him as considerable. Someone with resolve and abundance. There is a shadow of exigency and healing to be felt while reading about his journey. A whisper of promise that things don’t need to be this way. Our main character seems to be running away, but in doing so he is attempting to seek refuge in joyous diversions. And I can only ask, what is more 21st-century than that?

This self-deprecating novel exploded my expectations and became the novel from our generation that I’ve been dying to read. Innocence is limited and our grains of hope are sometimes dashed, but Brad Casey has demonstrated that we can all be this Handsome Man. Both running away and towards something possibly better than ourselves.

You can grab a copy of The Handsome Man at Bookshop.org