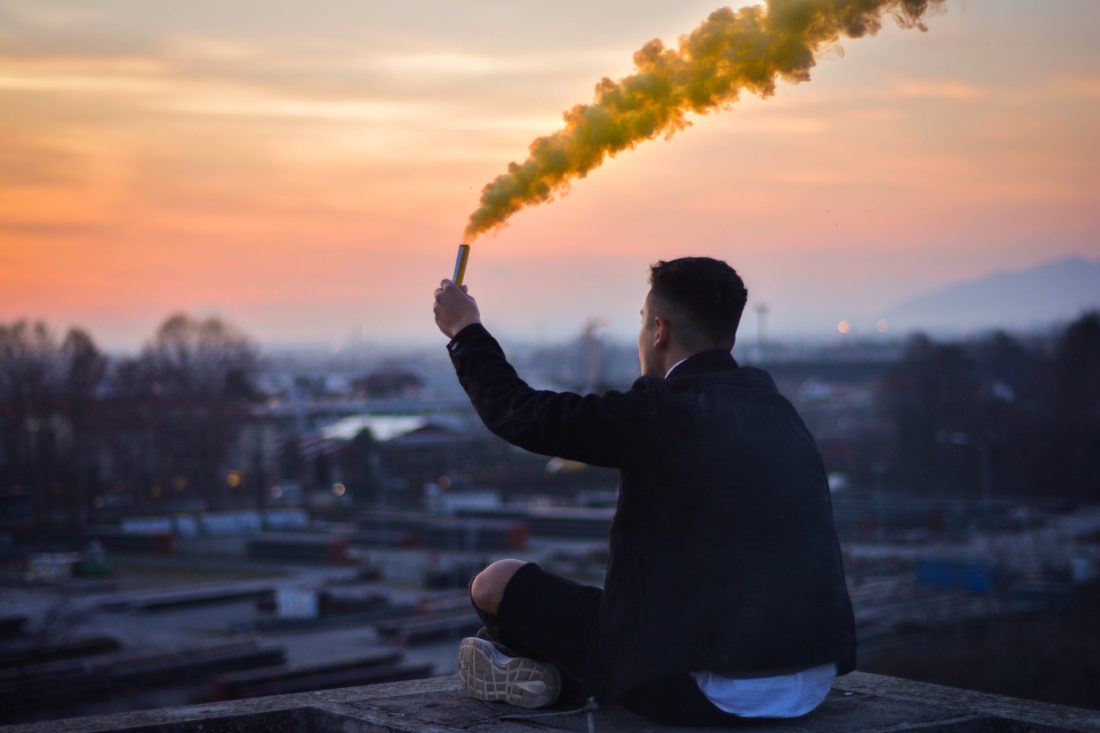 There was a gap of three days between the end of my last lease and the start of my next. During that time, I was essentially homeless. The familial home was one-hundred-and-sixty miles away, and contained only a nervous, suffocating mother. I loved her, and refused to see her. Such was the only family relation that remained.

The keys were placed on a desk in my room as instructed. When I exited the house, the front door clicked with a finality that surprised me. I was alone in a fake leather jacket and ripped jeans, the latter tucked into black walking boots and held up by a belt with a large steel buckle. The jacket and boots had been purchased the day I realised I would be sleeping rough. I also bought a new keyring, which along with a wallet and mobile were the only items I had on me. The rest of my belongings, meagre enough to fit inside a single small suitcase, had been placed in the care of a local storage company.

I walked down a series of streets as if on any other day. Portsmouth had become familiar without ever feeling like home. It was the kind of place someone could live in for years without realising the fact. Calling Portsmouth a ‘university town’ does nothing to add glamour to its name, ‘sailor town’ to its exoticism. But there is nothing inherently bad about Portsmouth; it is, after all, the people who define the place.

I felt a strange kind of freedom on arrival at the high street. I had time to kill and nothing to kill it with. I visited a fast food restaurant and loitered in front of French fries and coffee for forty minutes, then visited a coffee shop and did the same sans fries. The aimless waiting was pleasurable at first, before boredom set in, and the thought came to me that the hardest part of homelessness is finding something to do. Begging was not one of my considerations, and if I treaded carefully would never be; I had already paid for three months’ rent at my new bedsit, enough time to find a job and perhaps enough time to want one.

I ordered another coffee, the barista serving me with indifference. As I sat across from him without the cover of a phone or a book or a companion, he was either oblivious to my existence or purposefully ignored it. For some reason I willed him to look at me. There was little else to distract me. I already knew my final destination for the night ahead: a nook in the side of a university building that did not already reek of someone else’s occupancy. The building was situated by a main road, frequented by cars and pedestrians, and the publicness of it seemed more logical and more safe than a back alley or underpass. In earlier years I’d passed countless men in such spots, sleeping with apparent peace, as if in the knowledge that they would be left alone by everyone.

I left the coffee shop. The sun was setting. I saw many faces, none of which I can recall with meaningful clarity: an obese woman in a white tank top, an old man with a walking stick. The idea came to me to watch a film at the cinema, but I dismissed it as absurd, conceptually and financially. My bank account had been decimated, mostly by rent but also by habits, among them a woman. She taught me the value of eye contact, in imitation of lust or something transcending her own performance: the façade of control or loss of control, catalyst to an emotional connection or threatening behaviour. The eyes are powerful because they leave so much unsaid.

Hours passed. My plan was to wait as long as possible before settling down for the night. But boredom made me tired, and tiredness made me settle down. I found my nook and slumped into place, back against a hard surface and one leg bent at the knee, forming a triangle. I became the perfect image of a man in regret, but I felt no regret. I had my own plans, once. Many people passed me, young and returning from bars and nightclubs. I watched each of them go from the corner of my eye.

Another hour passed. The temperature was cool, but not unbearable. A sleeping bag had seemed a step too far, and I was fearful that the purchase would evolve into a long-term investment. Even on concrete, an exhausted man will eventually fall asleep. I wasn’t there yet, and perhaps wouldn’t be until morning. I remained slouched, eyes open, eyes closed, tracking the movements of passers-by with a perception I was unaware I had. There were few of them now: my phone was dead, but I estimated it was past midnight.

Finally a young man passed me, alone and seemingly in a rush, turning to ask if I was ‘comfortable down there.’ My mistake was to do nothing but look at him. The eyes are weak without a context. He stopped, facing me and moving closer, an easy target and the means to prove himself in ways that I had failed.

I stood. ‘Do the world a favour: crawl back up your mother’s cunt and stay there.’

Intimidation is a blend of fact and fiction, a careful measuring of threat and fury. Silence is not an option, and slowness will murder your options. When I stood, the leather jacket and boots stood with me. As I spoke, I reached with one motion into my pocket. Already my opponent had balled his hand into a fist, but already it was too late. From my pocket I had retrieved a keyring. Attached to the keyring was a small metal canister designed to hold lighter fuel. My opponent was looking at it now. I was looking at him.

‘You’re out of your fucking mind, mate.’

‘Do you know what’s fucking in here?’

‘You’re out of your fucking mind.’

‘More than you know.’ I screamed these words, affixed another insult to them. A cat makes itself bigger. Be bigger, be louder, be scarier; this is the advice I wish I’d had long before I was forced to put it into practice.

He ran. The street was left deserted, and rage flowed through me without an outlet. Intimidation is a process of convincing yourself. Convince yourself you want nothing more than to commit an act of violence, and others will be convinced of the same. But after the initial intoxicating rush, the imagination runs wild. Fiction is overwritten by fiction, one reality becomes another and fear makes its forceful return. I ran. Civilisation was suddenly hostile, or suddenly indifferent, and I was unable to tell which was worse. I entered a residential area, each house as impenetrable to me as a fortress, and in my panic as foreboding. My mind raced as fast as I moved. There was nothing for me here, and morning felt a long way away.

I entered the cemetery as if it had been my destination all along. Something clicked; this was the place. There was no one around, no reason to come here; even the outcasts and freaks had other places to be that night. I could see no trees in the darkness; I slouched behind a large rectangular tombstone and settled there, exhausted. This was the end of the first of three nights.