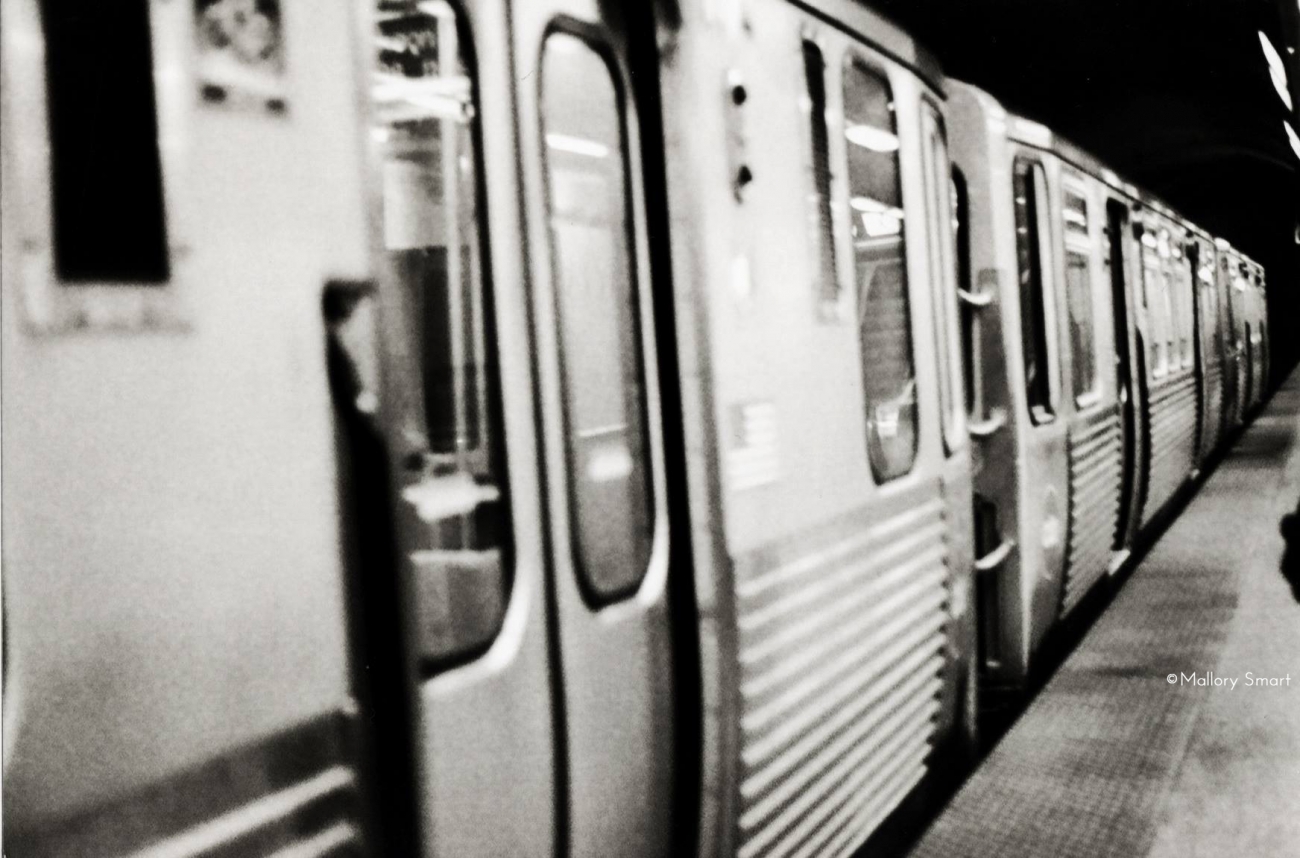 Someone is talking too loudly. I turn off my music and look across the aisle, wanting to glare down the source of my irritation. I’m only half-looking but I know that something’s off kilter in what I am seeing.

Sure, the guy’s gorgeous. Could have been a model only he’s got that homeless look about him. His legs splay out in front of him and he’s tapping his knees together like a child. His brown loafers are worn and dirty, his socks are flashy white. His shirt’s untucked over a big belly and I’m surprised by his fat, why, I don’t know. He just looks as if he should have been the lean sort.

He’s wearing an old brown leather jacket, it’s slightly out of style and covered in daubs of blue paint. Maybe he’s an artistic genius. His thick hair is curly and wild, brown streaked with a lot of grey. His eyes are a startling green, with long girly eyelashes.

His legs stretch in front of him and his belly faces front but he’s twisted at the shoulders, his face straining up from his slouched position. He looks for all the world like sixteen-year old boy who’s just fallen in love.

His large hands rub his thighs while he looks at the woman beside him, and he isn’t talking, she’s the one making all the noise, she’s the one jabbering a million miles an hour. He’s smiling, nodding, listening.

She’s about thirty-five and solid in tight stretched leggings, with a man’s oversize t-shirt that looks like it’s seen tough times and then some. She’s clutching a plastic bag with a bookstore label on it and she’s checking her phone.

“Frickin’ thing’s battery’s dead, dunno why, because I need it to work, man, I really do. Hey, you’re a good artist man, real good.”

He, meanwhile, bends down over an old canvas satchel covered in paint splats and pulls out a dollar store wire-bound notebook.

I’m suddenly distracted by a pretty boy hanging onto a large golf bag; he’s staring at me appreciatively. I nearly do the classic double-take ‘what me?’ and I meet his eye. He jerks his head towards the couple and smiles. I break into a great grin. Yeah, I was right, true love’s happening right in front of our eyes. I turn back to the couple, not wanting to miss out on a moment of the courtship.

The guy’s flicking through the notebook, showing the woman. The pages are covered in graffiti doodles and hard pencil rips have bitten into the page.

I worry the woman’s going to fall off her seat, she’s that excited.

She pulls up her sleeve to reveal a large tattoo of an ornate celtic cross on her right shoulder.
“You’ve got a tattoo!” The man’s like a kid handed a giant stick of cotton candy. He smiles, and his teeth aren’t too bad. I’m trying to get a read on the situation, he doesn’t seem homeless but he’s not exactly tethered to the reality of the day the rest of us are sharing – he’s somewhere in between.

“I’ve got more, man!” the woman crows. “All down my back, man and down the underside of my leg.”
She lifts up her right leg, like a little girl in a field of daisies lifting her dress because it’s all so good with the world. I’m relieved she’s wearing those leggings.

The man can’t stop grinning. “So where’re you off to now?”

“Gotta pick up my little girl,” the woman says, bouncing her leg fast, “but my frickin phone’s dead, man. Hey, so you could do my portrait eh?”

Hannah and Henry. I can’t stop smiling myself.

“So, man, if you’re gonna do my portrait eh, you should take my phone number right eh? Like just in case you want to phone me, eh? Because I gotta get off at the next stop, I gotta pee so bad, man.”
“You could find a restaurant up near the subway,” Henry offers helpfully.

“Yeah right, McDonald’s or whatever. So listen, Henry, you wanna paint my portrait? You wanna take my number?”

Henry digs into his satchel for a pencil and come up with a blue one.
He writes her number carefully in supersize letters in his notepad, while Hannah watches over his shoulder. He writes slowly, so she’ll stay close to him for longer.

“That’d be frickin’ cool, man,” Hannah says. “so listen I gotta get off, I gotta go and pee. You gonna call me?”

Hannah beams. Her teeth, I notice, are not so good.

“But I gotta charge my phone eh, give me time to charge up my phone eh, don’t forget eh, Henry?”
“I won’t forget,” he assures her. “I’ll wait for you to charge your phone. Hey, what you got in the bag there? Wine?”

“You gonna have fun tonight,” he says.

“Yeah! You gonna phone me?”

The stop nears and Hannah gets up. She smooths the big t-shirt down over her sturdy legs and flicks her hair out of her eye. Her hair can do with a wash and a comb, not that Henry shares my concerns. And Hannah’s giddy like a high school girl, self conscious in a way that’s just beautiful.
“See ya, Henry,” she says, turning shy and she suddenly finds it hard to meet his eye.

She gets off the train.

“I’ll let your phone charge then I’ll phone you later!” He calls after her.

Hannah leaves and Henry deflates like a big old balloon. He sinks his shaggy head onto his chest, taps his fingertips together and looks glum.

He’s wearing a large pendant with a semi-precious stone of some kind, it’s a vast silver circle hanging from a leather cord. He’s also got a couple of silver chains and a bracelet of large amber beads, like prayer beads only bigger. His blue shirt is missing a couple of buttons and his tan trousers are crumpled.

Once upon a time, Henry was oh so preppy, a real pretty boy, no doubt.
I look at the golfing boy with the perfect flaring nostrils, he’s still looking at me. I arrange my hand so he can see my wedding ring. For some reason he just grins more.

I look back at Henry. I wonder what made his life what it is today. Not that I even know what his current life really is but I can’t imagine Henry’s parents are all too ecstatic with how their son’s turned out.

I also wonder how Henry keeps his socks so white.

My stop comes and I get up. I’m standing waiting for the train to pull up into the station and Henry comes up beside me.

Up close he smells of woodsmoke, or old cardboard burning in an oil drum. I smell layers of acrid old urine on him, and it’s so thick it’s coming from his pores. The shoulders of his jacket are covered in dandruff and his big hands are shaking.

Henry has lost his glow.

The doors open and we spill out. The train pulls away and I see the golfing boy grinning widely at me. He tips his cap at me and the train disappears.

Henry and I match each other stride for stride and I’m considering starting up a conversation but I’ve got nothing to say and anyway, I’m late.

Lisa de Nikolits is the author of four novels: The Hungry Mirror (winner of 2011 IPPY Awards Gold Medal for Women’s Issues Fiction and long-listed for a ReLit Award), West of Wawa (winner of the 2012 IPPY Silver Medal Winner for Popular Fiction and a Chatelaine Editor’s Pick). A Glittering Chaos was released in Spring 2013 and tied to win the Silver IPPY for Popular Fiction. Her fourth novel, The Witchdoctor’s Bones launched Spring 2014 to literary acclaim. Lisa has a short story coming out in Postscripts To Darkness, 2015 and a short story in the anthology, Thirteen O’Clock by the Mesdames of Mayhem, due in October 2015. www.lisadenikolitswriter.com