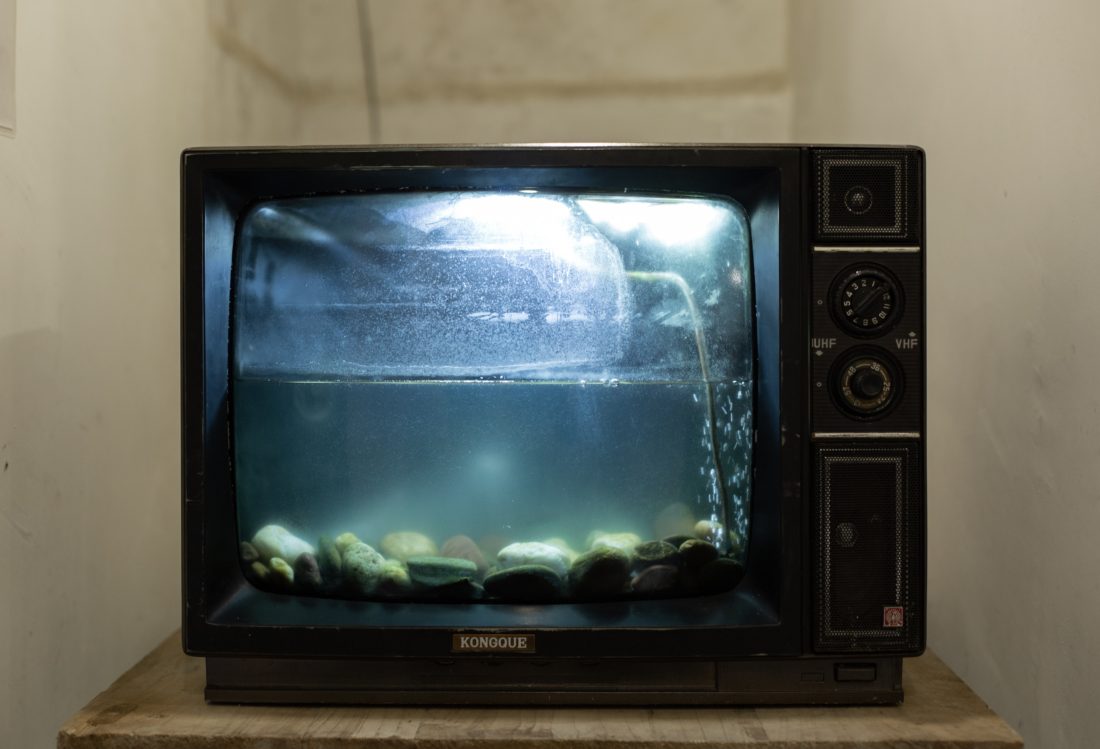 I watched my brother and his friends from my lawn chair under the plum tree. They was fiddlin with their stock car in the garage. When they did this, I was sposed to go to my chair where I was not allowed to move. If I did, then Ronnie would spray me in the face with the garden hose. It hurt extra bad when he had the spigot on the end, the one that looked like Gil’s handgun. But I didn’t mind sittin in my chair. Mostly cuz I liked to watch, and the shade was nice in the summer, and there were plenty of plums to eat just as long as the crows ain’t got to them yet.

They was workin on White Lightening. That was the name of their car, the one that was gonna make Ronnie a champion one day. It was a special kinda Ford they had tinkered with to make go extra fast. It had big tires that could dig through mud. Painted on the hood was a neat-o lookin flag that my brother Ronnie said meant “The Pride of the South.” He said White Lightening had many meanings.

The fellas drank beers, which I wasn’t allowed to have. Even though I was older than Ronnie, Gil said it didn’t matter. I was only allowed to drink Diet Pepsi, but I could have as many as four a day. I liked to watch them drink their beers. I’d match them, drinkin when they drank. When they laughed, I laughed. We was havin a good time.

They never let me race except when we played with the video games. I was better than Ronnie, and I liked to play with my helmet on, the motocross one Momma got me six Christmases ago, God rest her soul. I liked to wear it round the house and in the yard cuz it made me feel like a famous race car driver. Or like I was the car itself. Ronnie liked to smack me on the head and say, “Well, if it isn’t Arnie, The Human Demolition Derby!”

“I’m not sposed to, Gil,” I said. I wasn’t allowed to call Gil “Daddy.” Not since Momma died, God rest her soul.

I ran over, my helmet bouncin over my ears, makin the scratchy, scrubby sound like when Momma would wash my hair, God rest her soul. Gil finished his beer and cracked another. He put one of his big hands on my shoulder, which felt funny cuz he never liked to touch me.

“Who else is gonna race, Gil?”

I didn’t believe Gil at first, confused as all get out. And even though Ronnie and his friends was laughin, I could tell Gil wasn’t foolin.

“I get to drive White Lightening?”

“No. That’s your brother’s wagon. I got you a special car, boy. I want you to get to the track at eight pm. Take the bus, and when you get there, walk back to the pit.”

“But I’m not sposed to go to the pit. You said I’m never to leave the stands.”

“Well, tonight is different, boy. You tell Chip I say you’re meant to come back. And when he lets you in, you come find me. Okay, boy?”

My face was red with excitement like I had too many Diet Pepsis. I was over the moon.

I didn’t mind takin the bus. Ronnie always said the bus was for losers, but I thought everyone was nice and good talkers. I sat up front cuz I liked to look out the window and pretend I was drivin. I had my helmet on and was drinkin a Diet Pepsi through the hole in the mask. A dirty man with a funny eye sat next to me and told me stories about the government and a war he was in. When he stopped to take drinks out of the can in his bag, I told him stories about me and Momma. About how we used to name the stray cats, and how she used to feed them even though it made Gil real mad cuz they kept comin back. I told the man about how I was racin today, and he said that made sense on account of my helmet.

When I got to the track, I did just as Gil said and went to the pit. It was behind the stands.

“Sorry, Arnie. You ain’t allowed back here,” said Chip, who went to school with Gil a long time ago.

“Yeah, buddy, I’m sure you are,” he said, laughin at me. “Why don’t you go sit in the stands and grab yourself some nachos?”

But before I turned away, Ronnie came runnin up with a beer in his hand.

Chip looked surprised. “Are you sure, Ronnie?”

“Yeah. He’s competin’ tonight,” he said, smilin at me. Chip frowned, shakin his head. But not me. I smiled because Ronnie was smilin. Sometimes we didn’t feel like brothers, but tonight was different.

There was all sorts of tough guys in the pit area, dirty and happy, drinkin beers and tellin stories, but you couldn’t hear a word anyone was sayin because of the screamin engines, and the coughin from the bad smellin smoke from the cars, and the cheers from the stands, and the speaker that was announcin the race. It was the most excitin place I had ever been.

Ronnie handed me the beer and I took a sip. It tasted like rotten water. His friends came walkin up, grinnin like hungry cats.

Ronnie’s friends snickered and looked at him. He punched one of them in the arm real hard.

My brother put me in a special jumpsuit and zipped me up. They took me around a corner, and that’s where I saw her. The most pretty car on the planet.

“This is a Gran Torino, Arnie,” said Gil. “And she’s made especially for you.”

“This must have cost a fortune,” I said.

Ronnie opened the door and I climbed inside. My brother buckled me in real tight and put thick gloves on my hands. I felt like I was gearin up to be shot into space. Gil leaned in through the window.

“Now look here, boy,” he said. “It’s gonna get crazy out there. Don’t you worry about none of that, you just put that pedal to the floor. Go as fast as possible. No matter how messy it gets, you just drive like the goddamn devil.”

I nodded my head and put my hands on the wheel. I looked at the two of them. I was smilin behind my helmet.

“I sure wish Momma was here,” I said.

They faces dropped. Gil looked the way he looked when I left my lawn chair without askin.

“Get him into the arena,” he said to Ronnie.

The stands were full of the same folks who used to cheer on Ronnie. Now, they was cheerin on me. I was always jealous of Ronnie and his White Lightening. But now, that same love was rainin down on me. I felt like one of Momma’s cats that had come to her starvin, and she’d feed it and talk to it and after a couple days it could walk better and was purrin like a ridin mower.

“And nooooooooooowwwww,” said a voice over the loud speaker. “The event we’ve all been waiting fooooooorrrrr…. the Demolition Derby!”

I could not believe my ringin ears. They knew my nickname.

A horn blew and everyone cheered, but that was drowned out by the engines. I saw a pretty green light flash and I did as Gil said and put my foot to the floor. The car wiggled and shook. It was hard to see, what with the mud flyin all over the windshield. The smoke was everywhere and my ears felt like they had been stuck inside the dishwasher.

My car went flyin into the wall. I got banged into the steerin wheel. I could see through the windshield now cuz it was gone, broken and layin on the hood of the car like snow. It was another car that hit me, but it wasn’t no ordinary car. It was an ice cream truck. I was confused as to why it had been allowed to race. It still played that same tune that let you know it was sellin Flinstone’s push-pops. Now I could see all sorts of cars that didn’t belong: a taxi cab, a mail truck, a humvee.

But I paid no attention. I weaved through em, but they kept hittin the rear end of my new car. Then I got hit real hard. It hurt my head pretty bad. The ice cream truck and the taxi cab hit me from different directions so hard that we wasn’t movin. I was stuck, and so was they. We couldn’t move. I started coughin cuz smoke filled the car and I couldn’t see. I heard hollerin and could barely make out the other drivers. They was jumpin out they cars and runnin. I couldn’t figure out my seatbelt cuz my brother done such a good job bucklin me in. I kept coughin, but then I started screamin cuz it was gettin hot. It felt like I was in the box they put Momma in, God rest her soul. No air. Too small. Smashed underground.

Maybe it was best. I had thought this before, and I was thinkin it now. I could be with her again. It could be like it was when I’d lay on the couch with my head in her lap. She used to clean my ears while she watched stories about people gettin murdered. After she was done, she’d pet my head like I was one of them cats, and I’d pretend I was sleepin so she couldn’t get up. It would be nice to be held by her again.

I was. I was held. She held me so tight inside those flames. But as I hit the mud, I could see and breathe again. The fire was still on me, but Gil wasn’t lettin go. He lay on top of me, slappin at the flames. “Please, no,” I heard him say. “Please, God, no.” I saw Ronnie’s face and it was real scared. My skin was hot and I felt sick and I could hear Gil cryin. But I felt the fire go and Gil just lay there breathin. I liked him layin on me like that. It was the first time he’d hugged me since I could remember.

I heard Ronnie laugh, but not like how he laughed with his friends. I heard the crowd cheer. Gil and Ronnie lifted me to my feet and I saw they was cheerin for me. It was for me. It was all for me.