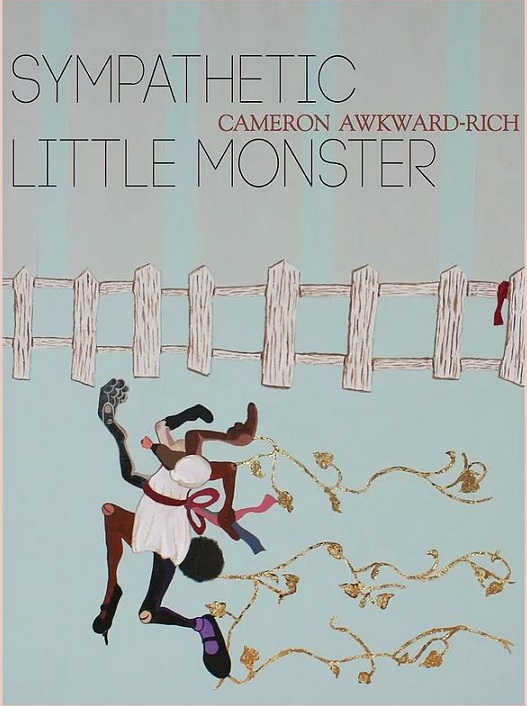 Picture a little girl kneeling in a glass field. Remember her knees are nerveless and her blood is a myth.  If it’s difficult to picture a little girl kneeling in glass, make her a rosebush. She resides as a ghost in the depths of a grown body, with a capacity to be multiple selves and shapes. Cameron Awkward-Rich uses her to dig into an intimate reflection of identity struggles. She is a nameless, continuous haunting behind every page. Written with startling lucidity, the poems step onto emotional ground built on racial tension, gender identity, and a body in transition.

Strange to be a girl growing up a ghost.

The lyrical narrative of the book refuses to give detail that allows composure of a comforting image. The little girl isn’t made of pigtails and summer dresses; in order to haunt, she is kept disproportionate. She melts into a rosebush, a tree, a coastline. Awkward-Rich defines “monster” not as something insidious, but unrecognizable.

If she pins the boy, if she holds his shoulders

in her hands, if she wants to fill him, all boys who see

will call her names, but never her own. She suspects this has

something to do with pronouns, or the way she comes to

school a rosebush and no one calls her a “faggot”.

Not bounded to a body or a gender, she is written as an ethereal, limitless being. The girl grows mouths on her limbs and fills up with tar, exploring the emotional wreckage of a youth inflicted with abuse and aching grief.

Once, I was a girl

Who took a black boy’s name

Into her mouth. I don’t know a thing

About  bullets, but I sure do know

Often, Awkward-Rich halts the linear timeline of the poems to consider intimate theories of motion. Prose examines identity flux and reflects upon a personal history. There is a tug between transition and transcendence. The little girl becomes an experimental component in an attempt to understand that before a black transmasculine being becomes validated, he must trudge through cultural objectification and come through intact.

After boy after girl after sweet outline of a boy-

& have you ever known a body not to be haunted?

Ever known a black body not to be riddled

There is an unnerving familiarity to the unapologetic harshness of Awkward-Rich’s writing. It becomes easier to witness the little monster child continuously take on harm. Once real, Awkward-Rich uses the leftover outline of her to shelter an entire timeline of a painfully significant transitioning. She is built not to be eye pleasing and innocent, but to hold fragments of a painful coming of age narrative closer together. Thus, Awkward-Rich gives instruction not to rouse any sympathy for the little monster.

Don’t sympathize with monsters, unless you want to

Become one. Even if we made them. Even if

They are little girls.

The sometimes spare, but wildly emotional poems chart broken pieces of youth at a precise distance.  The little girl is a mouth in which confession flows through, tirelessly.  By the end, she is translated from girl monster into materialized photograph, paralleling a much larger, more precious transitioning. The book demands we move closer to what is most uncomfortable, to better appreciate trauma and tenderness for the self. Sympathetic Little Monster is a diamond in trans, queer, black writing.

In the end, the girl is as monstrous as her image. The moral of the story?