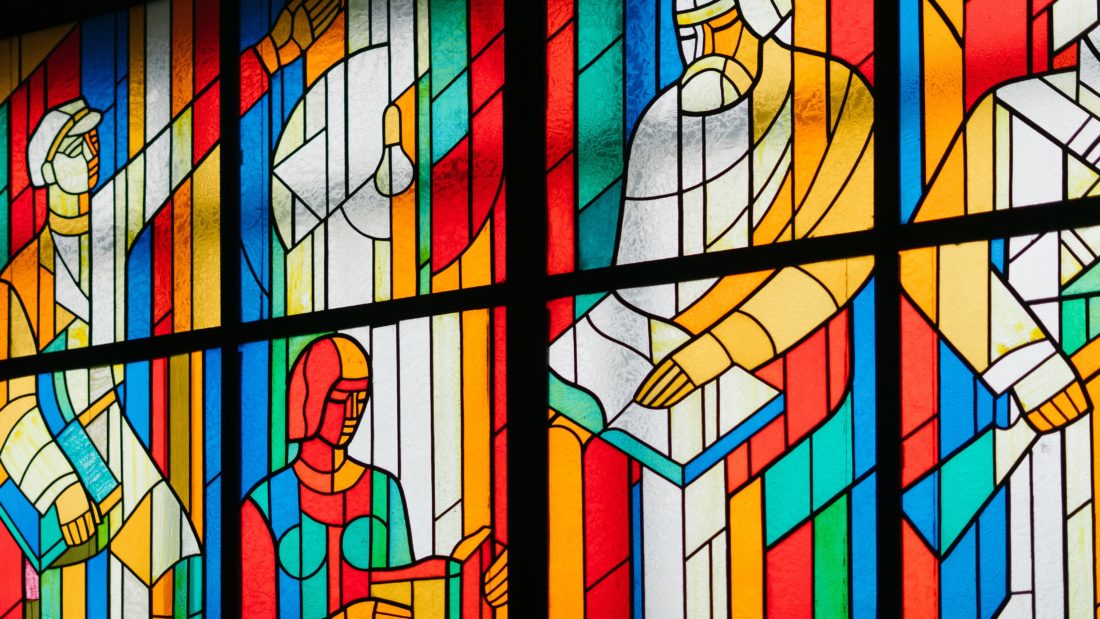 In the early 1800s, a boy named Leo is selected to be the next Pope after he writes an obscene sentence on a classroom chalkboard in a dusty English boarding school.
What follows is a satirical historical fantasy novel in footsteps that buck against the rise of both fascism and toxic masculinity in an imaginative effort to curb it at its source. “Sight Check” is an excerpt from it.

Because it was obvious Leo would be the next pope, the cardinal ordination ceremony was brief, to the point, and, other than Leo, only included lay cardinals and secret cardinals. This meant that the College of Cardinals would appoint the next pope largely in secret and in coordination with Pius VII, to avoid the overseeing gaze of Napoleon, who was by this point (1810) trying to end the Peninsular War in Spain despite not having been there—fighting—since 1808. But the great general was at that time focusing more on the Holy See—cutting off the British trade routes to choke the remaining bulwarks in the continent against his rule had already basically happened. And the Fifth Coalition, of Britain and Austria, was destroyed decisively last July, so at that moment it was just a matter of Napoleon not resting on his laurels per se but guarding them with his very life.

Leo chafed against his newfound cassock, the ankle-length garment brushing against his trousers, a fate which the mozzetta never threatened, resting as it did across the elbows and around the torso therein. The square cap, however, was absolutely the worst: the biretta, the new bane of Leo’s existence, was red, had a red tuft at the top, and was basically all red, to signify that he as a cardinal would be willing to die for this position—presumably before the pope was killed in his stead, presumably by Napoleon. In any case, Leo had no plans to die, although he couldn’t speak for the secret and lay cardinals beside him at that moment.

Pius VII left the inside antechamber and entered into the outside round portico, the train of his garment following him and attended to by a prelate for some godforsaken church in the suburbs of Rome a long ways away from this procession. As soon as the pope stopped walking and then turned around to face the group of about-to-be secret, lay, and Leo cardinals, the prelate/bishop scurried off into the antechamber and out of sight and away from the procession for the rest of the time the procession took to complete.

—Hey Pius! screamed Leo, —I thought I needed to become an Archbishop before this…

All the other almost-cardinals to Leo’s left and right looked at Leo like he was a buffoon, or, worse, morally repugnant, and then muttered amongst themselves about why he was picked to be the Chosen One, as everyone there already knew about the upcoming plot anyway. Leo just shrugged his shoulders so violently his mozzetta almost fell off over his head, a feat some of the other almost-cardinals found mildly impressive at the very least.

—We’re forgoing all that rigmarole with you, said Pius VII, —because you’re—

—Right, said Pius VII, collecting himself ever so slightly, —We’re going to start at one end, then go to the other end, and alternate until we get to the middle, or our Leo.

—Not yours, muttered Leo as the first secret cardinal was called up to receive the pope’s blessing; there were four secret cardinals to Leo’s right and four lay cardinals to his left. These were the last remnants of orthodoxy before Napoleon took over, and everyone knew it. So the ceremony itself became some sort of ritualistic litmus test for how loyal they were to the previous pope as opposed to Napoleon, and Leo couldn’t help but laugh to himself because he felt loyal to precisely nobody, not even himself. He would have excelled in battle, if given the chance.

After the first secret cardinal took his place next to Pius VII, a lay cardinal was called up. His name was Reggie, and Leo appreciated his company more than the other cardinals, secret or otherwise. It was a shame he was a lay cardinal, as Leo thought he would’ve made a better official one than many of the secret ones, but then again Reggie never had to hide his face in public, so there was that.

Reggie took a couple hesitant steps out of the line of the seven other almost-cardinals, genuflected, and walked up to Pius, almost tripping on the way there and catching himself before he hit the polished-as-a-whistle red and brown tiles below. He looked at his reflection in the glint of the tile and almost didn’t recognize himself, but he thought it might be because his biretta had fallen off so he picked it back up, put it back on his head, and retreated forward into the glow of Pius VII’s presence.

Leo almost didn’t see him at first because the sun was shining so heavily off Pius VII’s accouterments, but Napoleon was standing in the window behind the Pope and gazing something fierce into Reggie’s eyes, but, because Reggie was so dead-set on Pius, he didn’t meet the eminent general’s intense gaze. But when Leo saw the figure in the large, rectangular window, he knew the slats weren’t deceiving him and that the man who’d murdered his family so coldly a year and a half ago was in the window, not just because he would recognize Napoleon’s figure from anywhere based on woodcuts, paintings, drawings, pictures, etcetera, but also because the spiritual bandwidth the general resided on was one Leo coveted and sought to usurp. Leo wanted to be the progenitor and last source of all that Napoleon stood for, to speed things along towards modernity, something he had an inchoate inkling about but approximately zero words to enact or even describe. But he wanted to be that last bastion for the world, so everyone on the planet could finally see something different than they had in millennia, something that couldn’t be measured by military or religious success. And he knew the only way to accomplish that was through Napoleon, not despite him: to spite him, not in spite of him.

When Reggie had taken his place to the pope’s left, right in front of a Napoleon he didn’t see, Pius called the next secret cardinal, who similarly genuflected before the pope read some kind of liturgy Leo didn’t recognize and before Napoleon started smiling, closing his eyes, listening to the reading, and looking up past his eyelids, past the roof, and into the sky he probably called his own.

During the process of the next five cardinal ordinations, Napoleon stayed there the whole time, and Leo looked at him during every single ordination, but not only did the general not look over at Leo, he either had his eyes closed in reverie, or his gaze affixed onto Pope Pius VII, who never once looked back either, but always looked ahead, usually directly at Leo even if he was addressing another cardinal.

This dialectical, recursive chain of continual observation ceased when Pius finally called Leo’s name. Leo and Napoleon made eye contact for the first time as Napoleon shifted his eyes slowly towards the exact spot Leo was standing in, without looking at him at first, until the reverie finally left the general’s look and was replaced by a look of such shining and malevolent hatred that Leo shuddered something fierce, almost causing his mozzetta to fall from his less-than-broad shoulders yet again.

—A chill? Pius asked so innocently that Leo wondered if the pope knew the general had been behind him this entire time. —Never mind the weather, said the pope. —When we’re done next year, the weather will mean nothing to you.

—No, said Leo, —I just thought I saw something…

—I hope it wasn’t too upsetting, smiled Pius VII.

Leo genuflected for what seemed like a minute and then looked at his reflection in the tile while he did so, the shade blocking the reflection but only slightly. The sun was on its way down and would soon eclipse with the ceiling of the room adjacent to the portico and all that would be left would be the broad peak of Napoleon’s hat as it tilted slightly down and slightly forward like a pointer dog finally landing its mark.

Leo stopped looking at his own face and then his own body, with his own hand over his own heart, and finally turned his eyes upon the Holy See, whose arms were bent forward with the official cardinal regalia, as the ones he had on—the ones everybody’d had on before they approached the standing pope—were not the official ones. He walked up to the pontiff and stood before him, not daring to look beyond at Napoleon’s intensity.

Pius said a few things before saying that Leo was a cardinal and helping him to put on the official garments, but Leo was too busy staring at the vacancy where Napoleon’s staring form had been. Instead the window led to another window—a window he hadn’t seemed to notice before—and, beyond the second window, a garden—beyond the garden, Napoleon’s figure walking swiftly away towards a carriage.

After the ceremony, Pius VII came up to Leo and chuckled. —Excited to see the general?

—He murdered my family, said Leo incredulously, —and I’m supposed to just assume a prone position as he murders this papacy and its orders?

—Oh come now, said Pius. —He’s really a fine guy. Judge not lest ye be judged and all that.

—I don’t think the Sermon on the Mount applies here, and I’m mildly shocked you’re invoking it for this cause.

—Indeed, said Leo bitterly, —but why is the papacy sidling up next to him?

—Because he has political power right now, and we’re in the process of losing ours.

—That doesn’t mean we should just lie back and expect things to get better.

—Nobody’s expecting them to get better, probably not even Napoleon.

—Then what gives him the right to take us over?

—Goodness, laughed Pius VII, —you’d think you were born for this.

—I am born for this, said Leo, puffing his sixteen-year-old chest farther than he probably needed to. —I don’t trust that general as far as I can throw ‘im.

Leo’s betrayed English accent gave Pius a fit of laughter, which eventually subsided but not before the pope was able to tell Leo one last thing, —I should probably tell you this now, he said,

—You have it too, said Leo, amazed.

—Yes, I do, said Pius. —That’s why they call me the Holy See, he said as he walked away and left Leo alone in the small portico in that enclave between antechambers in Vatican City.

Leo looked past the two windows ahead of him and shuddered so slightly neither his mozzetta nor his biretta fell down onto the tiles below his feet.