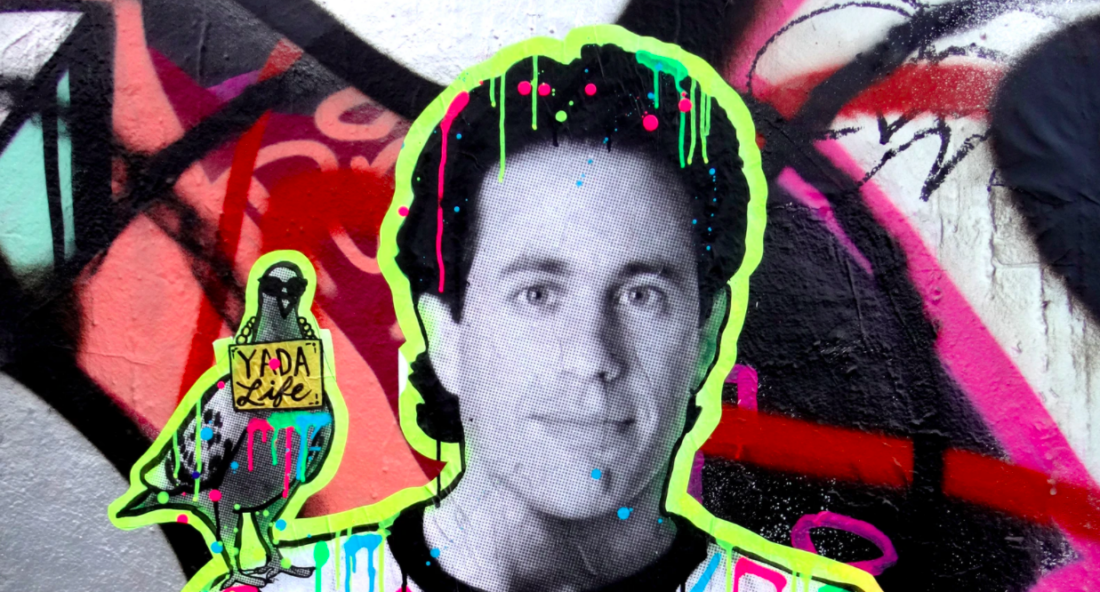 No, a man walks into a bar. Says ‘Who put that there?’

No, not that either. The man apologizes, with all these hits to the head adding up, he can’t keep the story straight. His memory is cloudy, his nose doesn’t even work anymore. He smells bad. No, he smells badly. He goes to a different bar (ducks under it) and orders a drink.

Bartender asks him, ‘Why the long face?’

‘Well,’ the man says, but has to excuse himself to the restroom. His nose has started to bleed. He wipes the few drops that landed on the bar, but that only makes it worse, and he rushes away.

The men’s room is like any men’s room. The bar is like any bar. Likewise, the man, except for the fact of his nose. He’d like to blame the bleeding on something, but it’s always been like this. As a child, he sneezed little red flecks on his school desks. He’d wake to bloody pillow cases in the night.

The men’s room mirror has profanities carved into it. Someone knocks on the door.

He hates that one. His nose hasn’t stopped bleeding, so he stuffs some toilet paper in the faulty nostril, walks out. The bartender is still cleaning, spraying sanitizer over everything. He looks somewhat like Jerry Seinfeld.

‘What’s the deal with that?’ the bartender says, pointing to drops of blood on the floor he hadn’t noticed.

The man is annoyed. His nose is bleeding, he is sober, and seeing Not-Seinfeld bartending, he remembers that people have always told him he looks like Kramer. He’s never even seen Seinfeld.

Not true—his mother would watch religiously, and he’d caught a few things. The episode where Kramer is afraid of clowns. One of the Soup Nazi ones. The one where Kramer pours his blood into Jerry’s car radiator. Maybe he made that one up?

A priest, a rabbi, and a minister walk into a bar.

The bartender says, ‘Why the big pause?’ No, that’s for bears.

The bartender says, ‘I’ve never seen a stiff drink.’ No, that’s for the dead.

Elaine was his mother’s favorite character. She’d do the dance just as Elaine did, push his chest and yell ‘Get out!’ when she’d been drinking champagne too much champagne. That was her drink of choice. He wanted to read into it—her life as a celebration or something—but maybe she just liked the bubbles. Perhaps it was an excuse to drink the whole bottle. Wouldn’t want it to go flat, would we?

Not-Seinfeld brings him a beer, then a second beer, but all he can taste is the blood dripping down the back of his throat.

There must be a Seinfeld about probate court, funeral arrangements, executors of estates. It costs how much to be cremated? What’s the deal with that? Maybe he’ll watch that when he gets home. Or perhaps he’ll let it stay a secret, bury her with the box set, let the mystery of unwatched episodes distill into a kaleidoscope of possibilities.

A sea of Seinfelds has filled the bar, each jostling each other and crying out ‘Hey!’ Every now and again a Kramer can be heard slamming open the door.

There is a Seinfeld for your nose bleeding on your first kiss. Another Seinfeld for making your mother laugh to stop her from crying, for developing humor as an emotional astringent. The Seinfeld for I-Can’t-Keep-Going is having a drink with the It-Could-Be-Worse Seinfeld. A cluster of Seinfelds are at the door, slamming it closed every time the Kramers open it. Every now and then one will slip through, make a small dent in the line of Kramers waiting their turn outside.

He’s bleeding through the makeshift nose plug, has gone back into the men’s room to spit a bloody, mucus-thickened gob in the sink. The studio audience groans a collective ‘ew.’

The Seinfelds are in the bathroom with him now, fighting over stalls, arguing over the correct distance between urinals, pointing to the man bleeding into the sink.

‘What’s the deal with that?’

He remembers his mother, champagne bottle in hand, turning the volume on the TV up until the neighbors pounded on their thin apartment walls, blasting the volume specifically because his father hated it, was always complaining about the volume, the noise, her friends, their mama’s-boy of a son—

A horse walks into a bar.

‘Why the long face?’ says the bartender.

The horse tells him about a night long ago, running into his parent’s room to the sound of screaming. The horse says it was worse than usual, remembers the bruises already blossoming on his mother’s ribs, but remembers more than anything how exposed he felt standing in his underwear, sobbing and begging them to stop, trying to throw himself between them and…yadda yadda yadda.

In the bathroom, the man holds his bloody nose while the Seinfelds receive a ghostly applause. ‘Thank you,’ they say, ‘I’ll be here all week—Thank you, thank you—’

He’d heard a joke with no middle once. Just setup and punchline. Funniest shit you ever heard. All in the delivery they say, as they cut to the punchline, the bass riff, the closing credits. And what then? Turn the cameras around, let him see the studio audience clapping, hollering their laughter. See them carefree and joyous for a brief moment, see them detached and unaware of themselves the way only God or a television set has ever seen them.

He needs some air. Clutching his nose, the man walks out of one bar and into another.