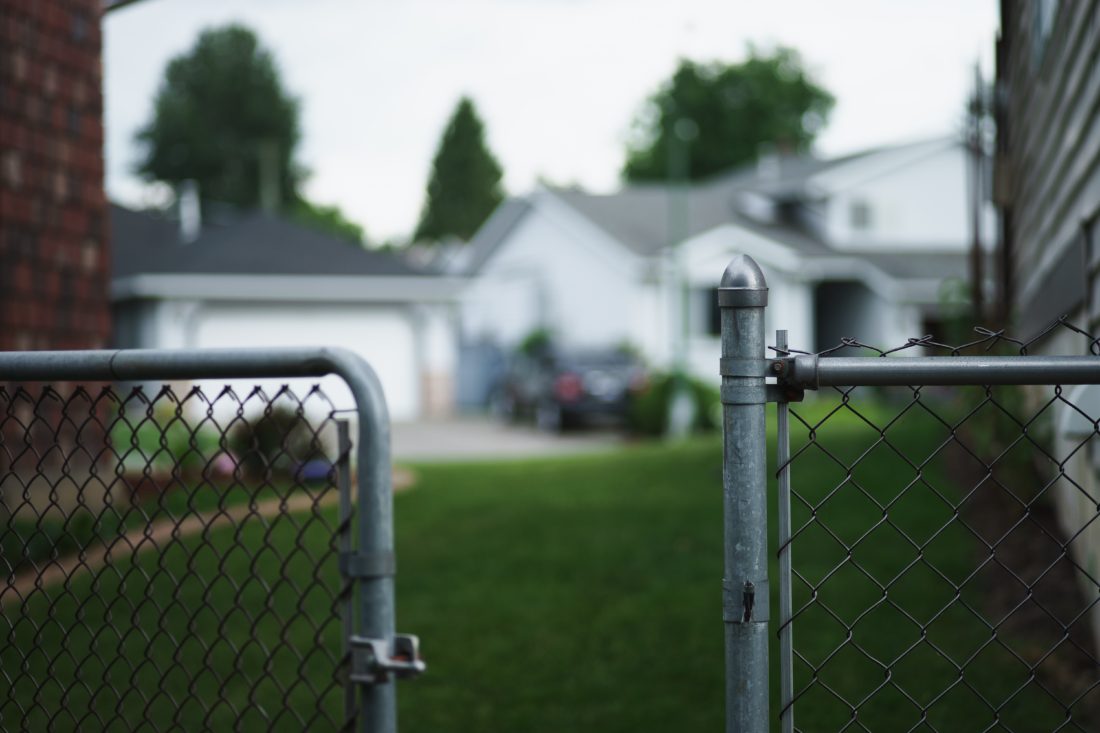 The animal next door was whining and sounded as though it had no intention to stop. I wanted to write the neighbors a strongly-worded note, but confrontation made me queasy, and I had the wardrobe to worry about. I figured I’d get to it eventually.

On average, I found the animal whined for six hours each day, not including the time I spent at the grocery store. By factoring in my absence, I assumed the whining went on for nine, maybe ten hours. That’s an awfully long time to do any one thing. It really is.

I used to change my clothes in front of the window that overlooked both our yards—pathetic slabs of concrete woven together by an easement that ran the length of our block. Now, to be safe, I dressed in the corner of our room, body obscured from view by the wardrobe, which seemed absurdly large for the lack of fixtures remaining inside of it.

We didn’t meet them, but I remembered, months ago, eyeing a woman’s back while she carefully unpacked individual stem glasses from a cardboard box and set them on the shelf. Our kitchen windows faced one another. I hovered there, watching her weave in and out of sight while my chicken breast thawed in a large bowl of cold water. She had short, black hair, and was wearing a white cardigan. I saw her bracelet glinting beneath the fluorescent lights.

I thought about tossing the wardrobe. Our room was a glorified shoebox, but I felt the space would seem barren without it. What if, in the impossible future, I brought someone back, and they glanced around disapprovingly? The thought was unbearable. Instead, I made an inventory of what was left: one mostly-vacant wardrobe, one bookshelf, one queen mattress, one fitted sheet, two pillows, one duvet, one duvet cover, two mirrors, nine photographs (five framed, four polaroids tacked to the wall), one vase, one stick of deodorant, one comb, one bottle of micellar water, and an entire drawer of mismatched socks.

On our other side, an older woman lived with two large, gray cats, whom I often saw sleeping in the windows. I’d spoken to her once when I was idling in the backyard, watching the sun dip beyond an infinite expanse of identical roofs in every direction. She poked her nose over the stone wall separating our properties and asked, “Excuse me, do you smell that?”

I asked her what she meant. “That burning smell,” she said. I nodded, motioning vaguely around us, and told her people often used fire pits in the spring and summer. It felt patronizing—explaining an element of social decor to someone at least thirty years my senior. My neighbor offered a warm smile and introduced herself as Marjorie. She was new to the area, she said, and had lived in the suburbs for forty years until her husband passed. I was sorry to hear that she had suffered a loss. Marjorie shook her head. “So young,” she said to me. “Barely sixty-five. Bladder cancer.”

I told her my wife was also sick. She clapped a hand over her mouth. I said not to worry, she was kicking it right in the ass. Marjorie beamed at me. “Oh, great!” she exclaimed, although her expression read slightly distant. Throughout the exchange, I never saw her below the neck. She could have been missing an arm or wearing stilts. Later, I realized I should have asked about the barking dog—if she heard it too.

In the early mornings, I took long strolls around the neighborhood, if only to escape the noise, which seemed louder before dawn. I wrote letters to the neighbors in my head. Sometimes, they were addressed formally. Dear sir or madam, I’d like to express my concern… After the wardrobe had been emptied, I began the notes with expletives, or no introduction at all.

The animal whined for fifteen weeks before I contacted a nearby nonprofit. I asked if they offered pickup services for large furniture. I had never done this before, I said, and wasn’t sure if I would be able to transport the wardrobe on my own. It was quite a nice wardrobe, once belonging to my wife’s grandmother. Antique brass knobs, I told them, as though I wanted someone to urge me that I was making a terrible mistake.

A truck was scheduled to arrive the following afternoon. I hung up the phone and stepped outside. The weather felt balmy, too warm for springtime, flowering trees in full bloom. I lingered by the curb, hiding in the shade of a saucer magnolia. Pink petals drifted down the street, blanketing the windshields of parked cars. I took a seat on the front steps.

At some point, I heard Marjorie’s door open, and was met with a gust of cool air from indoors. I looked up, the midday sun a halo against her shape. She was wearing pink house slippers, the same shade as the saucer magnolias lining our block, and a matching robe. The gray cats trailed at her feet.

Marjorie adjusted her glasses and shut the screen door. Her joints groaned as she sat beside me, rheumatic knees snapping in their sockets. She smelled like aldehydic perfume. The cats obediently sat behind the threshold, fur glinting silver in the sunlight.

“Their names are Freddie and Mercury,” she said, gesturing toward them. “My husband loved Queen.”

We observed in silence as a pleasant breeze carried the petals in silky, spiraling tendrils, ambling along the asphalt to a nameless tune. My wife loved saucer magnolias; she said they looked like cotton candy. Marjorie reached out and placed a tentative hand on top of mine, which I noticed had begun to tremble. The animal next door was howling again.

“Sometimes, I wonder,” Marjorie said, not looking at me, “if that poor thing is in pain.”