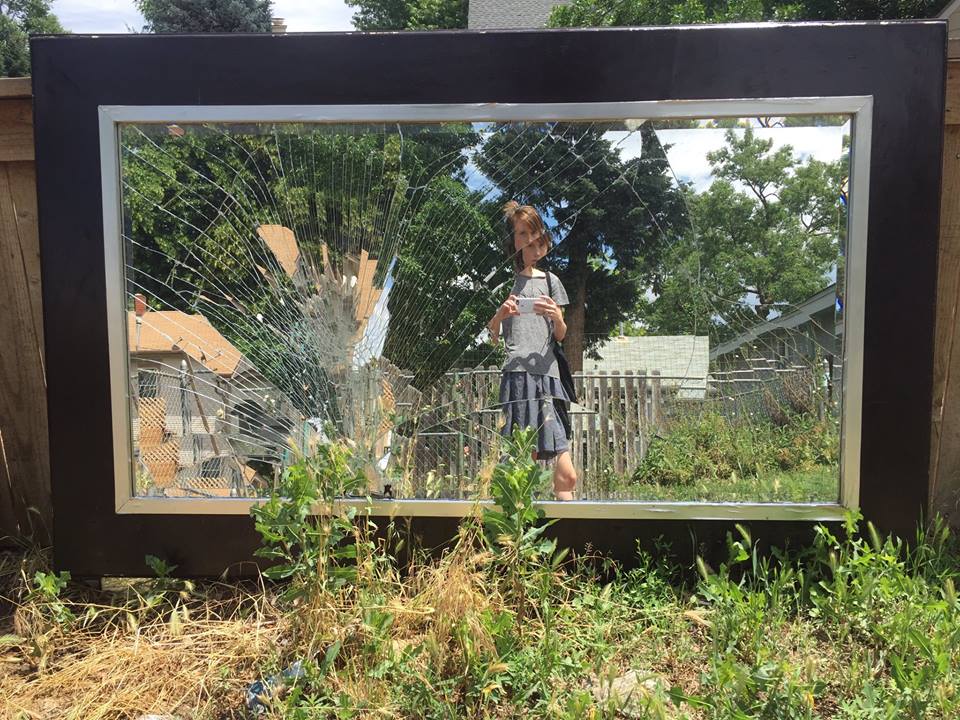 My books are kind of dark. I write hate poems instead of love poems. I still am inspired by love though. Even if I’m writing a “hate poem” it’s coming from a place of wanting to transform those feelings into love.

Your collection ABLE TO / ALWAYS WILL is coming out through Civil Coping Mechanisms, how does this collection differ from your Electric Cereal collection GHOST GFS?

Almost all of the poems I write are about interactions I’ve had with other people. I don’t know how you’d classify that. Recently I saw a tweet that’s like “GIRLS SHITTING ON EX BOYFRIENDS SHOULD BE A CLASSICALLY RECOGNIZED GENRE” (@grantypannies) and was like “ya that’s my book.” GHOST GFS is about an abusive relationship while ABLE TO / ALWAYS WILL is about a long term relationship that might’ve in moments felt painful but a different kind of pain, it wasn’t abuse. Instead the pain you feel when you meet someone – you learn from them and sometimes those lessons feel like a cut does, where it hurts immediately, like a paper cut but it’s just a paper cut. It hurts for the moment but it doesn’t really affect you. What’s affecting you is everything outside of the paper cut, the paper. Relationships are like origami in that sense – you’re creating something and sometimes you fuck up. Sometimes the paper crane doesn’t come out right but that doesn’t make it any less beautiful. That’s what writing these poems was like – each poem is an action in a sense. While GHOST GFS condemns the actions, ABLE TO / ALWAYS WILL is more an out of body experience, reflecting on what happened, not trying to condemn anything but still being honest. My books are kind of dark. I write hate poems instead of love poems. I still am inspired by love though. Even if I’m writing a “hate poem” it’s coming from a place of wanting to transform those feelings into love.

What do you consider the biggest challenge you’ve faced in the literary community?

Mistreatment and instances of heightened disrespect. I think what it really comes down to is how we choose to interact with others. Ingrained misogyny is so real. Women are so strong and femininity comes off as being the weaker of the energies, but that’s not true. Despite knowing that’s not true, I’ve still been objectified and manipulated into feeling like I’m weak. A lot of experiences I’ve had with male editors and publishers have been negative but I think that reflects a bigger issue. It has definitely been my biggest challenge personally and within the literary community. I try to produce work that inspires people in a positive way despite the constant invalidation of my emotions. It shouldn’t come down to gender but that shouldn’t negate the fact it often does.

You got your start in the Oakland literary scene. What impact has this had on your writing?

I graduated from my bachelor’s program in Ashland, Oregon, about five hours from Portland and five hours from the Bay area. I had to decide where I was going, and the opportunities were in the Bay area as well as the person I liked. Which I didn’t want to admit to myself at the time but that was a big part of the reason I chose to move there. This is actually a really poignant question because that move is the reason I wrote this book. I started looking for a job and was kind of ready to step into what it meant to be an adult. To settle down in a sense which is funny because I had just turned 21. But I had been dating this person on and off since I was 16 so I guess it made sense that I wanted to like commit myself and get a real job and kind of prepare myself for whatever came next. But that like American dream didn’t work out for me. Initially it was really shocking. It was the first time I was really vulnerable and expressing true feelings of love and they weren’t ready for it and maybe I wasn’t ready for it either. Love is hard. I think I’ve come to understand that the most while writing this book. I think fate is real. I think we connect with others for specific reasons, I think we have certain interactions for a reason. I never thought that way before, but over time I’ve seen how things add up. So this book came from a time and place but also the actions that occurred. What I think I know now about fate is that sometimes you have to forgive it.

You’re planning a literary festival in Denver for early August. Any details on it? How can people get involved?

S/o Justin Ryan Fyfe. On Justin’s birthday there was a party in Chicago and a bunch of readers at the party, I went and was like so inspired. People coming together, celebrating poetry. It was just the best energy to be involved with and I was immediately like how do I do this? I had recently gotten back from Mission Creek Festival in Iowa City and was thinking things like how do I, as a female publisher, take the reigns in these kind of situations and instead of waiting for someone to ask me to read, invite people to read. I want to meet poets, people. Turns out a lot of us feel this way so a bunch of writers who I know from these kind of interactions are coming to visit. The idea of a festival felt like an opportunity to invite people from the online community into an irl space, introduce them to the local community in Denver. Maybe it’s also an opportunity to remind myself of the good things these communities create. Despite personal challenges I’ve had, I gain a lot from interacting with others and I want to be able to do my part in helping others have those same kinds of chances to meet and support each other, hang out, you know, get off twitter for a few minutes. This Lil Lit Fest is August 5th-8th and anyone can get involved by attending the events and supporting the readers. Another chance to get involved is at the Backyard Barbeque and Book Exchange, which will be like a very informal book fair involving a Q&A with Alli Simone Defeo and the Nostrovia! Press reading. Witchcraftmag.com/events for more details!

What do you think influenced your writing most in ABLE TO / ALWAYS WILL?

A long term on and off relationship that I had with one person. These poems reflect on the ups and downs of loving someone and the challenges that love presents us with. I don’t know, I’ve been watching a lot of reality tv recently and one of the shows I’ve been watching is The Challenge, so maybe each poem that I made in this book was kind of a challenge, and then like I won, I won that $125,000. At the end of the book I’m the winner of the challenge we call love.

If you were given the option of being a bird or a fish, which would you choose?

A bird. I’m an air sign. I’m afraid of flying but I think that if I were programmed to… like if my life’s purpose were to… but what else is there other than flying through life. I like fish, I like to swim, but I feel more at home in the air despite my fear of flying. I just like birds a lot. They’re beautiful.

Wanting to understand unconditional love and watching way too much reality tv, they feel one in the same to me. People forced to interact in situations they would otherwise not want to be in seems to almost always evoke true acceptance and forgiveness. Recently I’m thinking reality tv helps us understand our human nature and maybe more people should watch it.