“Glad to Be Alone”: Hiromi Kawakami’s Strange Weather in Tokyo 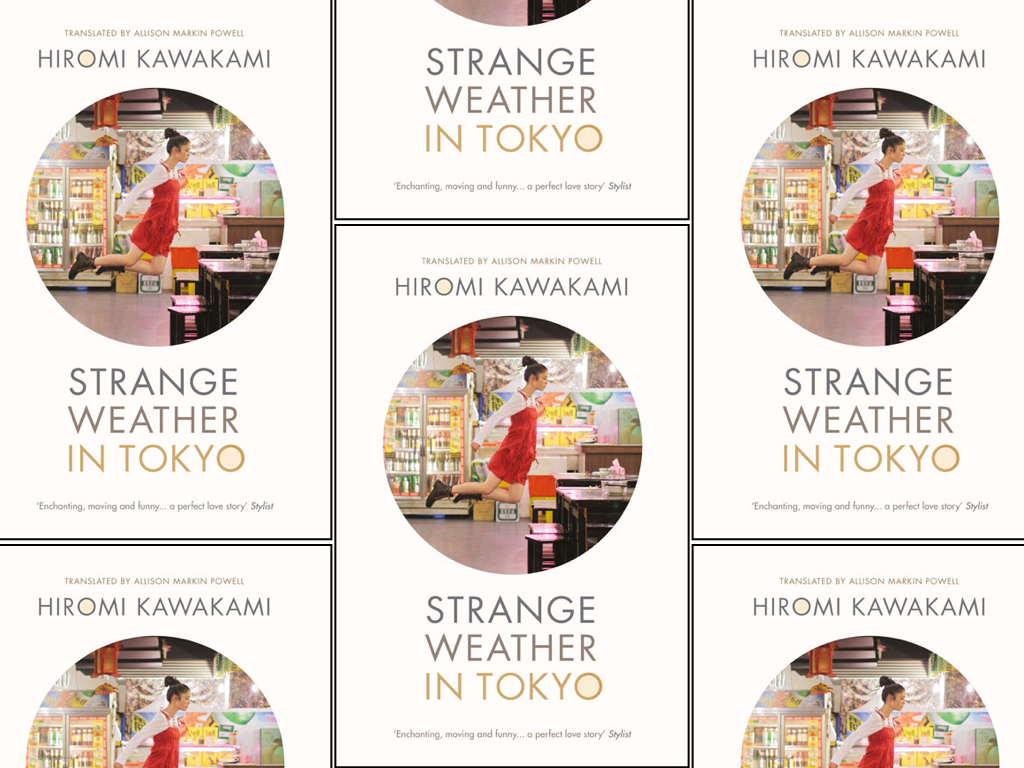 To be savored; to be re-read. Keep a copy within reach anywhere that promises a flicker of solitude and a view of the changing seasons.

Before I’d even opened this book, a little barnacle of concern had already begun to calcify on whatever part of my brain it is that sweetens and shines when a new book enters its orbit. Here’s the elevator pitch: Tsukiko is content, if not quite happy, in her solitude—until she runs into her now-retired high school teacher in a bar late one night. Time passes; a romance begins. This bare-bones take traces the outline of a familiar story, one that has long been hard to view with anything but cynicism and a sour face. A woman’s entanglement with an older man—the mentor/student framework—empowered authority and youthful innocence—it would be hard to muster up the investment, the necessary sincerity, if this story amounted to nothing else.

How thrilled I was to discover that Strange Weather in Tokyo is not the story its back cover summarizes! Or: it is, but it is unburdened by much of that narrative’s baggage. Light as bird bones, this is neither a romantic whirlwind nor some sort of psychosexual quagmire. It is a novel aware of its scale: no great fall or epic stakes here; only the usual vagaries of life—the ups and the downs and the expanses of time in which life simply goes on, much as it has. It is a book invested in taking the familiar and cramming it full of surprises, and is, above all, a story about the slow growth of respect, care, and friendship.

With an anecdote-to-anecdote structure, Strange Weather in Tokyo leaps through the seasons in relatively few pages. Each anecdote is rich with insight and humor, but none are so lengthy or oppressively detailed as to weigh down the narrative. Though it’s a short novel covering a broad expanse of time, there was none of the expected chronological whiplash: enough psychological consistency anchored each character, creating a sense of place-between-people, even as settings changed.

And then, it was May.

Tsukiko’s narration suggests that between anecdotes, things carry on much as they have—and as both she and Sensei are creatures of habit, it’s a fully believable claim.

Strange Weather in Tokyo is a sensuous novel, but not a steamy one. The indulgent, detailed sex scenes that plague so many other “literary” works have no place in the lightness of Tsukiko’s narration, and while she’s certainly not chaste, any sexual tension is undermined by the essential comedy of desire. (Sensei’s preferred gesture of affection, deployed regularly and to my great delight, is a pat on the head.) One remarkable late-night encounter—the one that, more than any other, seems to careen toward some sort of climactic consummation—is interrupted when Sensei asks for Tsukiko’s help finishing a haiku, and the two stay up drafting poem after poem—Sensei is later frustrated to discover that they have accidentally rewritten Basho.

Despite Kawakami’s commitment to frustrating Tsukiko’s more carnal desires, Strange Weather in Tokyo is a sensuous read—largely due to entrancing, practically erotic descriptions of food. Food marks the changing seasons as we’re bounced from anecdote to anecdote. Kawakami uses food prep to chart the novel’s burgeoning relationships: where does the food come from? Though expressions of familiarity and affection are rare, how different it is to get takeout compared to a family recipe—compared to mushrooms gathered and cooked over a campfire? Even refilling a glass of beer becomes an act of intimacy in Kawakami’s masterful hands. She catalogues each meal with fastidious care—bordering, perhaps, on obsession—and with a surprising tenderness that makes the food a presence (and very nearly a character in its own right!).

Thin, almost-transparent slices of octopus were submerged in a gently boiling pot of water, and then immediately plucked out with chopsticks when they rose to the surface. Dipped in ponzu sauce, the sweetness of the octopus melted in your mouth with the ponzu’s citrus aroma, creating a flavor that was quite sublime.

‘See how the octopus’s translucent flesh turns white when you put it in hot water…But, just before, there’s a moment when it appears every so slightly pink, don’t you see?’

Here is a master of sensuous writing! Here, Kawakami wields imagery as exact as it is mouthwatering, commanding the senses in such a way that inspires appetite—describing octopus and mushrooms and fresh tomatoes with lavish indulgence. This food exists in time, rather than as some static, unassailable singularity. It becomes, and the mystery and delight of becoming is wrapped so tightly in an eroticism that desire colors every meal, from the decisive snap of chopsticks pinching the meat or the sensation of flesh on the tongue. All while preserving the role of the imagination—hinting at a “sublime” flavor, a mystery beyond description, to titillate and ensnare.

Sensei is elevated in our estimations because every other man in Tsukiko’s life exists somewhere on a spectrum ranging from malicious id on legs to oblivious, if roughly anthropomorphic, Spam. Satoru and Toru, nearly identical, play dumb pranks, drive haphazardly, and exhibit an inspiring disregard for the sensitivities of the people around them. There are old boyfriends, few of whom merit more than a paragraph of Tsukiko’s narration, and an on-and-off suitor who is somehow both slimy and inept. And there’s a scene, near to the beginning of the book, when Tsukiko is sexually assaulted by a former colleague. They are out to drinks, engaged in casual if awkward banter—but

“he must have got the wrong idea…because after we left the bar, he tried to pull me into a dark corner to kiss me. ‘Cut it out!’ I said as I caught his looming face with both my hands and pushed him away…”

He insists, all whispers and grime, until she distracts him:

“I took the opportunity to quickly run off towards the subway entrance, leaving my colleague standing agape in the dark street. Even after I was down the stairs, I kept running. After making sure that he wasn’t following me, I ducked into the ladies’ room. I went to the toilet and thoroughly washed my hands. As I looked at my reflection in the mirror, with my hair slightly out of place, I started to giggle.”

Tsukiko can barely keep herself from laughing at him—at the whole situation—and it’s unclear whether her laugh is pity, or bewilderment, or desperation. It’s also unclear what kind of trauma she carries forward from that moment—no further mention of him is made; he is a footnote, a parenthetical—to Tsukiko, hardly worth the energy of remembering. But she does remember. And it’s clear that she’s never been given a reason to trust men.

Her usual epithet for men like these is that they are “old-fashioned;” in her mind, laughably so. How old-fashioned it is, she thinks, to call a woman “sweetheart;” to drunkenly berate her; to feel owed after a date. How old-fashioned to ignore the most basic ethical premises—say: consent. Misogyny, petulance, even assault: “old-fashioned.” An epithet. A reminder.

Tsukiko sees none of these men as sound prospects because none of them seem capable of even a baseline friendship. None acknowledge her fully or recognize the possibility of an equal partnership. But Sensei, while decidedly anachronistic in his habits, is not “old-fashioned” in the way the younger men are. His worst offense, by comparison, seems to be rooting for the wrong baseball team—

“I didn’t think he would be so fickle, but then again, he was a Giants fan. There was no way that I could genuinely trust what he might do.”

It is, admittedly, a significant betrayal, cause enough for heartache and a cold shoulder. But despite this, Sensei remains quite removed from the other men we see in the book.

Strange Weather in Tokyo is, above all else, a tender book. The love in this book is never reduced to power, or sex, or jealousy, or passion. Yes, there is a little of each—but gently sprinkled throughout, enough only to tantalize, to acknowledge their presence without ceding the field. Instead, the bulk of the novel is devoted to the deeply felt, slow-growing affection of two friends whose lives, for quiet moments, line up. Who have the same taste for sake and seafood and who are happy to sit in silence next to each other. The love in this book is the kind that comes on slow, grows robust, and can weather any strangeness.