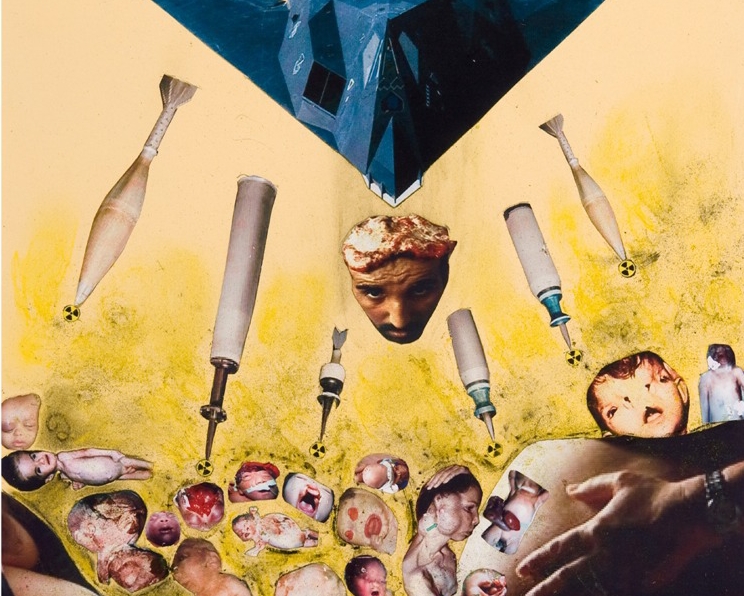 He was wearing sunglasses and seemed oblivious to everything around, except the highway ahead. “The black country,” he called it, looking for a second check point that was supposed to appear at any moment, but seemed as absent as the landscape with its hidden hills cloaked in a dull green veneer, over hung by a mixture of clouds mixed with grey and muted light left over from the thrashing of ocean winds that had changed direction. Now they were looking up at the sky as it twisted and turned into volatile shapes, a brief flash of sunlight at some minor distance, then death, this black country, he kept thinking, that was so within reach of escaping, but they were simply driving into it with barely a thought of themselves. “You could look a little less conspicuous,” his companion said.

To be told to be less conspicuous sounded ludicrous. He looked like he always did in sunglasses and leather coat, but perhaps, it was the sunglasses or fatigue or the relentless journey forward that had turned their world into a monotonous trail of dusty roads and refuse. Often blacks played ball on the streets as they passed, and dust from cars would roll upward into the air, forming dirty little clouds that hung over the landscape. Or groups of black women passed with curious, though disquieted expressions, carrying bags of groceries or dead chickens in their hands, and always a white policeman telling them to move out of the way, the blacks playing ball with raised sticks in their hands suddenly freezing at the policeman’s orders, or the women moving aside and turning their faces away, now covered in dust that transformed their faces into chalky white masks, their languid movements reminding him of the open stride of cheetahs.

The heat began to submerge their lives in dull perplexity, for there was no second check point on the road, though the sound of gunfire could still be heard when they rolled down their windows. The sun beat a measured symphony of rippling waves over the hood of the car that reached up and licked the very perspiration off their brows. They gauged their bearings and direction before rolling their windows up and driving another mile or two, before the driver pulled over on the highway now littered with body parts, stray trails of dried blood, dead animals, and abandoned parts of machinery that seemed to have no apparent reason for being there except to burn in the tropics. “The last time I was here I was less conspicuous,” the driver said lifting his sunglasses to the top of his head for a look into the distance, all the while bodies alongside the road swelling and crackling in the hot tropical sun.

Thomas Sanfilip is a poet and writer whose work has appeared in such literary publications as the Shore Poetry Anthology, Thalassa, Ivory Tower, Nit & Wit, Tomorrow and Ginosko Literary Journal. Five collections of poetry have been published — By the Hours and the Years (Branden Press), Myth/A Poem (Iliad Press, 2002), The Art of Anguish (2004), Last Poems (2007), Figures of the Muse (2012), in addition to a collection of short fiction, The Killing Sun (2006). Poetry in the Age of Impurity, a collection of published and unpublished essays, was published in 2013 by Bigio Morato. Presently he lives in the Chicago area and has written for a variety of other publications, including Rattle, The Literary Yard, Book Page, Rain Taxi, Letter Ex, Filmfax, Film Quarterly, Film Score Monthly, The Journal of Popular Film and Television, and the Walt Whitman Encyclopedia.