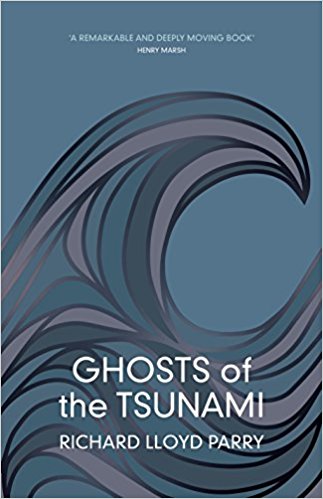 Death is another kind of absence, one that leaves a sudden, big (enormous) wound that gradually heals, or so it seems to me. Disappearance, on the other hand, makes a tiny, uncertain wound that grows a little larger every day.

We have a deep catalogue of rituals of loss—strategies for confronting deaths and celebrating lives. But disappearance does not fit into the usual vocabulary of our lives in the same way. There is mystery there, uncertainty, and the deep pain of hope.

This week, then: the second of three books that hope to contend with the grief and loss that make us human—a book about disaster, reparation, and the struggle to draw sense from tragedy, featuring a journalist desperate to engage with the grief of others as if his humanity depends on it (and it might).

To borrow shamelessly from Salt-n-Pepa: let’s talk about grief (baby).

In Ghosts of the Tsunami, Richard Lloyd Parry tries to draw meaning from horror. On the eleventh of March, 2011, an earthquake struck Japan. This is, as he points out, not entirely unusual. Earthquakes are part of the tissue of the everyday in Japan, and while they are hard to predict precisely, their vague potential informs much of everyday life.

But this earthquake was different. This earthquake was one of the most powerful ever recorded on earth. It shifted the planet on its axis. And while Parry himself admits to a blasé confidence at the start of the earthquake, its intensity and duration left all those affected deeply shaken: if the earth itself is not as solid as it would seem…what can we put our faith in?

Almost sixteen thousand people died as a result of this seismic upheaval, most as a result of the monstrous tsunami that came after an earthquake—a wave that surpassed forty meters in height and, in some places, reached six miles inland. In order to grapple with the scale of such a tragedy, Parry dissects grief longitudinally and microscopically, profiling individuals in intense detail over the years following the disaster. His hope seems to be that this will open up a kind of understanding in himself (and, by extension, in us).

He focuses in particular on the Okawa elementary school, where more than eighty teachers and students lost their lives to the tsunami. There are two reasons to focus on Okawa:

Perhaps, at some level of superhuman detachment, the deaths of the Okawa children did make possible insight into the nature of the cosmos. But long before that remote point, in the world of creatures who lived and breathed, they were something else as well—an expression of human and institutional failure, of timidity, complacency, and indecision.

Parry writes about Japan as a British expatriate who has lived there for sixteen years—which is his defense, I think, of broad essentialisms about Japan’s “national character”. The specters of orientalism and overgeneralization are ones that he seems wary of, but does not quite manage to escape.

But lucky for us, this is not a book on the national character of Japan (or…mostly not). It is, instead, a study of a few select individuals: grieving mothers; school administrators; priests. Ghosts of the Tsunami hits its lyrical and affective stride when it allows these individuals to shine through as people, rather than focusing in on the science of a tsunami or the bureaucratic systems meant to contend with disaster. There is a depth to their cognitive struggle with the arrival of the otherworldly tsunami on their doorstep—their struggle to live alongside unanswerable questions—that allows this book to reach into realms of beauty.

A Reverend Kaneda, who takes it upon himself to travel Japan and heal what he can where he can, tells Parry:

“We don’t work simply by saying to people, ‘Accept.’ There’s no point lecturing them about dogma. We stay with them and walk with them until they find the answer on their own. We try to unthaw the frozen future. People feel as if they have staggered into a fantastic land of disaster and pain. But it is not a place of fantasy. It is the universe we inhabit, and the only life we have on these islands. Volcano, earthquake, tsunami, and typhoon—they are our culture, they are as much a part of Japan as the rich crops in the fields. Everything that was built over a hundred years was destroyed by the tsunami.”

Parry, a foreign correspondent, once prided himself on his capacity to remain separate. This book opens with his realization that reserved stoicism (which, why not, let’s make the claim that it’s part of Britain’s “national character”) is not only inappropriate on an interpersonal level, but also on a philosophical (or even theological?) one.

I knew the facts of what had happened, he writes, and I knew they were appalling. But at my core, I was not appalled…for much of the time I experienced a numb detachment and the troubling sense of having completely missed the point.

He sees empathic imagination as the essential key to shedding detachment, and writes of the peculiar necessity of imagining what is, in fact, real. It is his own search for meaning that leads him to these parents and priests, these other searchers on the way. Parry finds that when our comfortable narratives fail, it is not the fault of narrative as a tool—it is a flaw, instead, with the specifics. In fact: his answer to the twin problems of tragedy and empathy is more narratives; better narratives.

More stories to be told, and retold in different ways, and tested like radioactive material for the different kinds of meaning they give out. Stories alone show the way…

He is a man used to finding answers and facts, searching now in a place where the only honest answers are admissions of ignorance. Why do parents outlive their children? How can life continue, when so much has been taken? Why rebuild, knowing that another wave will one day come?

But even here, where no philosophy seems to satisfy, where we cannot understand the whys and hows, we still have our stories. Parry’s intuition is that our stories help us understand others’ experience of the world and to greet them more fully on the way. This certainly appeals to me, but perhaps only because I am in the business of telling stories—sharing, reshaping, fictionalizing and poeticizing until we reach something true. It is hard not to be wary of someone advocating so ultimately for his own field.

The longitude of the project—from the first burst of grief and horror to the lingering absences to the blooms that grow from sorrow—is stunning, spanning many years of searching and sadness. Ghosts of the Tsunami suggests that grief is not the tidy, five-stage story we are so often told: it is, for many, a fact of the everyday, a part of the human ecosystem that never quite fades, even as it may diminish or change.

But even as the book destabilizes familiar narratives, its form is fairly staid. A story so filled with possessions, hauntings, and presences might benefit from some of the formal strangeness of a book like Bicecci’s Empty Set—it would lend a visceral quality to the confusion, doubt, and heartache of the 3/11 tragedy.

Grief must be lived in, eaten with, inhaled and exhaled until we are something entirely new. It is, by Parry’s reckoning, not something to be avoided, or to recover from or push away. It is a part of each life. Perhaps the best way to engage with it is to rationalize, analyze, understand it. Perhaps storytelling is best. Perhaps—though I hope this is not the case—there are no “good” ways to contend with it.

Even as grief stays stubbornly with us, our suffering does not have to. And on the other side, Parry is told, there is the sense of power discharging at the end of pain.

You can read adapted excerpts from Ghosts of the Tsunami here and here.