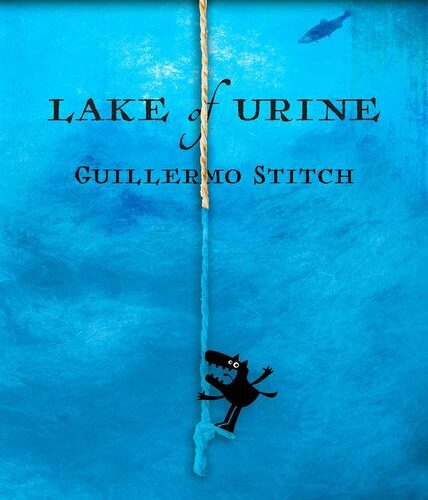 This novel is surprisingly good. I hate stating that in such a candid way but even I was shocked that a book with such a strange and grotesque title could be beautiful. As a publisher, I personally would’ve asked the author to play it safe and change the title into something more inviting but that would be a mistake of immeasurable proportions. This novel as a whole does not play it safe. It’s full of charmingly outlandish wordplay that fittingly focuses on the weird and unexpected. The author, Guillermo Stitch, should be praised for this. Not many authors could pull off a bait and switch like this on their first novel, yet he does with delight. The prose is full of charmingly outlandish wordplay and get this- “Urine” is actually just a name of one of the main characters. Well done.

When reviewing a book, I hate giving away too much of the plot in fear that it will take away the intrigue and urge to read it. So I won’t. After all, we’re a generation hooked on bullet points and TLDR’s. Not insulting anyone, I do this too. Like everyone else, I skim and bounce from article to article haphazardly while drinking iced coffee. DON’T DO THIS WITH THIS NOVEL. Instead, grab a beer and surrender yourself to Stitch’s weird cast of characters who eccentrically navigate a sardonic world that is closer to our current one than we would like to admit. Last year one couldn’t say that. Guillermo Stitch wrote this with the intention of it being satire, but right now every waking moment of our actual reality is that. Living it is hell but reading about it as fiction is for some reason better. We weren’t meant to relate to this. This was a surreal, alternate reality for the reader to walk away from pondering what it would be like to live in such a society that promotes crassness and overwhelms sensibility to a breaking point. Yet, here we are. Think of it as metamodern escapism with a twist.

Lake of Urine has become a mirror of our own fucked up society. Thankfully, like our soon to be banned TikTok, it’s dark and witty humor pushes the reader forward. We get to laugh at late capitalism while also bathing in it. Death, fast food, and poverty are all central themes throughout this novel but we never truly get mired down with sadness. Even in scenes of abuse, it’s hard to hold onto one dominant feeling. It’s a manageable nightmare that we get to joke about when we wake up as it slowly fades away from our minds. I can’t decide whether this novel brings Voltaire or David Foster Wallace to mind, but I doubt either could do a better job of bantering about the savage human spirit than Stitch does here in 2020.  He has characters legit talking about wanting money and death at the same time. There are burger-flipping contests. There are fucked up family dynamics. There’s even a tinge of anarchy. This is not a novel for those who are just looking for a beach read. It’s dirty. It’s funny. It’s complex. It’s the kind of debut novel that most authors could only hope for. Guillermo Stitch is just the kind of writer that this year needs. Check out this book before the chaos ends.

Buy it at Bookshop.org or Sagging Meniscus Press

(also available on Amazon and SPD)