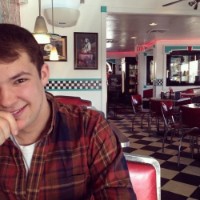 A recent graduate of Potsdam College, Kevin has spent three and a half years studying American literature, philosophy, and art history. He founded Ghost City Press in 2013 and is the author of three collections of poetry, From the Estuary to the Offing (2015), Modern Thought (2016) and Soft Boy (2017). He is a staff writer at DrunkenBoat and is the former poetry editor for Mixtape Methodology. His favorite movie is Rebel Without A Cause (because it’s so gay), he’s currently listening to the album Communion by Years and Years (because Olly Alexander is so attractive), and he has an actual crush on Frank O’Hara (who was also very, very gay). This summer, you can find him hiking in the Adirondack Mountains or selling books at the Colgate University Writers’ Conference. 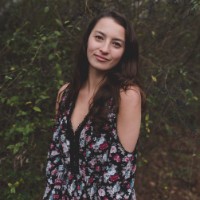 She is a writer and artist from Birmingham, Alabama. After completing her BA at Auburn University, she moved to Seattle, where she currently works at Open Books: A Poem Emporium and serves on the editorial boards of the Seattle Review, Poetry Northwest, and Broadsided Press. She graduated with her MFA in Creative Writing from the University of Washington in June 2016.

A childlike consciousness, notions of daughterhood, the South, domesticated animals with hooves, and—as of last week—The Simpsons frequently appear in her work. Currently, she’s writing several books at once; this year, her goal is to complete at least one of the following: the poetry collection; the YA novel; the collaborative, illustrated-poem project with Adrienne Raphel; or the slowly evolving book-length poetry comic. Her awards and honors include scholarships to the Bread Loaf Writers Conference and a Made at Hugo House fellowship. She is an Indiana Review Poetry Prize finalist, winner of Gigantic Sequins’ Poetry Comic Contest, and a mentor through the Adroit Journal teen mentorship program. When she’s not reading, drawing, or writing, she’s probably slicing a sweet potato, playing volleyball, or perusing Airbnbs in Madrid. Favorite podcast: Commonplace. Beverage of choice: whiskey. Love language: work.

Selected works: “The Gates”, “Gretel Was an Only Child”, “Excerpt from In the Circus”,“Carousel”, “Ice Tithes”

He often writes about angry, bitter millennials; this is because he himself is an angry millennial. He writes horror, sci-fi and tries to write literary short stories, with mixed results. He has three major goals in life; to see the Mets win a World Series, to write a novel that sells so well he can afford health insurance, and to one day throw a perfect knuckleball. He is engaged to be married and has a two-year old son, whom Alex hopes to place unreasonable expectations upon.

His debut sci-fi novel, Erosion  is currently in the pipeline with Crimson Cloak publishing. He has won zero rewards and would like to thank the columnist for the opportunity to be depressed about that.

Catch his game reviews and assorted short stories over at: squidthroatonline.com