She is a poet and basketball enthusiast who, two years later, still grieves Steve Nash’s retirement. Before moving to Knoxville to pursue a PhD at the University of Tennessee, Katie lived in Texas where she received her MFA from the University of Houston. Although she knows next to nothing about The Lord of the Rings, she waited tables at a restaurant called The Hobbit while she lived in Houston.

Her poetry has been supported by the Bread Loaf Writer’s Conference and Inprint. Her writing focuses primarily on the intersection between family, religion, and sex—particularly the ways conservative religious ideologies obscure and manipulate the ways we understand ourselves as sexual beings. Her poetry often calls (out) people by name. She is interested in the ways direct address creates both intimacy and urgency—how it can reveal that a poem is always already a conversation. Katie serves as the poetry editor for Grist: A Journal of the Literary Arts, and would love to read your writing as a thank you for reading hers.
Selected Works: Praying Naked & other poems, Hymn & other poems, Argument for Loving from a Distance
Website: www.katiecondonpoetry.com

A black poet from Baltimore that believes there are mysteries in the world that can only be unlocked by keys made out of art and imagination. He has a thing for good food, good Netflix shows & indie movies, good conversations, and SweetTarts. He sings, and is as passionate about music as he is about defining his own creative voice. His writing is heavily influenced by his Christian beliefs, but also laced with the wildness of the Beat Poets, the imagery of the Romanticists, the crooning of Frank Ocean, and his favorite anime. He also likes writing a lot of floral imagery into his work and has been known to stack nature-scented metaphors atop each other like skyscrapers. He is working on a degree in Creative Writing.

Though in his mid-twenties, he is still an amateur when it comes to putting his work out into the world. He hopes to change that this year. He is currently working on a novel about angels and city streets, a project called 100 days of creativity, and his first poetry collection.

Selected Work: Of Dog and Flower 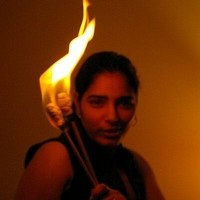 She is author for the novel “Baba Ali and the Clockwork Djinn: A Steampunk Faerie Tale”, written with Danielle Ackley-McPhail. Day hosts the multi-author blog “Unleaded: Fuel for Writers”, and in addition to speculative fiction, she also writes comics and film scripts. When not working on fiction, Day is Senior Policy Advisor with the U.S. Department of Labor. She also hosts a program on Idobi Radio’s Geek Girl Riot.

She is also a film maker. Two of her films were recently shown on local Virginia cable television, and two more are in pre-production. Her current focus is on a Civil War documentary on the Invalid Corps and the Battle of Fort Stevens about group of soldiers with disabilities who saved President Lincoln from a surprise Confederate raid.

She is most proud of being invited to teach a workshop on storytelling: “Strikingly Beautiful: A Celebration of Women & Girls with Disabilities” at the White House in February 2016.  She presents often on the representation of and importance of disability in media.

She lives in Washington, DC with her wife, N.R. Brown,in a house with too many swords, comic books, and political treatises.

Selected Works: Ghosts of Janus, Touch of Love, I Went to the Museum to See a Man’s Soul …, Death’s Garden