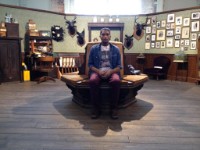 Kam wanted to be a scientist, but isn’t. Instead, they are a reader at Gigantic Sequins, an editor at Jellyfish Magazine, and goes by Kam. The author of two chapbooks: DISTRESS TOLERANCE and PERCEIVE DISTANCE FROM IMPACT, Kam stays busy. Even more so when their work has been featured at Muzzle Magazine, The Destroyer, Nashville Review, Vinyl Poetry, and Smoking Glue Gun, among others. Kam has studied Poetry, Critical Race Theory, and Queer Theory at Sarah Lawrence College before leaving to American Studies at The University of Hawaii at Manoa. Kam is currently working on a long ecopoem titled GROWING CONCERN, a longer essay about the neoliberal implications of historical transliteration, and their first full length poetry collection, EDUCATIONAL HISTORY?.

In a past life, she was a K-5 science, robotics and comic book writing teacher in the South Bronx. Now, she puts her instructional design skills and tech training to good use at CryptoParties and is an Assistant Poetry Editor for Tinderbox Poetry Journal. Her work has appeared in Vida Review, Hyperallergic, The Felt, and Wildness, among other places. Her first chapbook, Spells for Black Wizards, won the Atlas Review’s 2017 TAR Chapbook Series. She’s performed, presented, and taught at the Obie-winning Bushwick Starr Theater, Dixon Place, Free School/Escuelita Libre, Eyebeam, the New Museum, and Trade School at the Museum of Arts and Design, and received a commission from the American Jewish Historical Society for poems about black diaspora and liberation. Find her walking her pitbull down Nostrand Ave, watching too many episodes of Murder, She Wrote before bed, and subtweeting the white supremacist capitalist patriarchy. 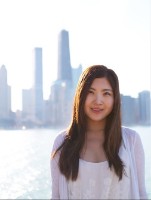 A Korean who is Canadian by citizenship and primarily resides in the United States. She works as the Poetry Editor for The Margins, the literary magazine of the Asian American Writer’s Workshop and is a PhD student in the East Asian Languages and Civilizations Department at the University of Chicago. Her poems have appeared in The New Yorker (forthcoming), The Volta, Pinwheel Journal, and Ploughshares, and her translations have most recently been published in Menage, Poetry Foundation, and The Literary Review. She has received award and fellowships from Ploughshares Emerging Writer’s Contest, AWP’s WC&C Scholarship Competition, The Home School in Miami, and New York University. She grew up with and has a fondness for shi tzus, makes good sundubu jjigae, and turns on her ocean wave projector when she misses the Pacific Ocean.