Known to most as BillJim. Officially called William James who likes trains, and scaryloudangry music. He is a poet, aging punk rocker, and train enthusiast from Manchester, NH. He is a Multiple Pushcart Prize & Best of the Net nominee, co-facilitator of the Slam Free or Die writing workshop, founder and editor-in-chief of Beech Street Review, and a contributing editor for Drunk in A Midnight Choir. Phew. His work has appeared in various literary journals and anthologies, including Rogue Agent, Harpoon Review, and Noble/Gas Quarterly, among others. His debut collection, “Rebel Hearts and Restless Ghosts” is out now on Timber Mouse Publishing. 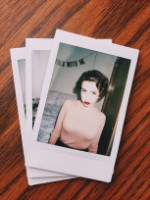 She likes to write sad poems about sex and she is the opposite of chill. She is a Jersey-born, Florida-bred gal who believes the best art is derived from naked honesty. Two of her recent poems, “Meanwhile” and “Alpha” were featured in Public Pool, while her other works have appeared in Sea Foam Mag, Hypertrophic Literary, and Flapperhouse. She also writes about feminism and empowering other women at She Did What She Wanted. She is currently pursuing an MFA in Poetry at West Virginia University. Catch her posting drafts, sketches, and other trash on her website.

A certified Mom friend at the age of 20 years old. She lives on the Greyhound, travelling back and forth between Toronto and her hometown. She claims to be a poet and photographer, but is really just a person who spends too much time looking at pictures of black Scottish Fold cats who kind of resemble the dragon Toothless from How to Train Your Dragon. Who can blame her? Co-founder and the Editor-in-Chief of The Northern Appeal, as well as an editor for The Goose. Her work has been featured in Vagabond City Lit, Hungry Boy, untethered mag, and The Strand. She fulfills her duty as a millennial  by being overly present on twitter and instagram.