She wrote about five separate drafts of fantasy novels by the age of eighteen. She thinks they’re awful and vaguely resemble Twilight. They’ll never see the light of day. Nowadays, she finds herself writing about families or how the human body fails us and we fail it; how it breaks down, mentally or physically. She is the Assistant Editor of CHEAP POP. She published a collection of short stories at the age of nineteen through Thought Catalog, entitled Almost Love Stories. Though it is fiction, her mother swears to this day that each and every one of Hannah’s protagonists is herself.

Besides writing (and reading, obviously), she loves spending time with her family, drinking good beer, and baking, and when she’s not baking, she spends most of her time doing yoga, watching literally anything and everything on Netflix with her husband, and playing with her cat, for whom she would sacrifice her life.

Selected Works: “This isn’t Real”, “Cartography of a Girl”, “Versions of Ourselves”, “Glorify My Bones” 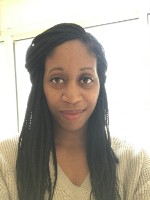 A black woman with an acute awareness of her body and yours. In writing, she tries to reveal both the exterior and the interior world of characters. Holds a Bachelors of Science in Business Marketing from Elon University and an MFA from Inland Northwest Center for Writers at Eastern Washington University where she studied poetry, co-taught creative writing to high school students, and worked as an assistant poetry editor for Willow Springs Magazine. A serial monogamist, but also a dangerous flirt. Stood next to Junot Diaz for 20 minutes at a reception and didn’t speak the entire time. Currently living in Beijing in the shadow of the Wangjing Soho building and teaching English to children. Doesn’t speak Chinese beyond, “Hello,” “Thank you” & “What kind of gin?”, and is often lost. At Tin House summer workshop 2016, Kiese Laymon told her the essay she submitted didn’t suck. Lactose intolerant and will probably tell you about it. Wants you to know if you’ve stopped writing once and began again, you’re a hero.

She often writes about grief because it’s one way through it. Her first collection of poems is based on her father’s experience of growing up in Lebanon during the Lebanese Civil War and his subsequent immigration to the United States. She is the author of Set to Music a Wildfire (forthcoming from Southern Indiana Review Press, 2017), which won the 2016 Michael Waters Poetry Prize. She is the recipient of an Ohio Arts Council Individual Excellence Award and the 2012 and 2013 Dorothy Sargent Rosenberg Poetry Prize. She also won the 2011 Copper Nickel Poetry Contest. She interviews fellow poets about their work and their animal companions on her blog Pet Poetics.

She is a vegan of 10 years, a former silversmith, a sometimes tattoo artist, an avid tarot enthusiast, and a marketing nerd for an insurance agency by day. She probably relies on her dogs for emotional support much more than she should.

Selected Works: “My Father Dreams of a New Country”, “My Father Is the Sea, the Field, the Stone”, “Shame, Abridged“, “The Lights Shut Off in the City of Ghosts“, “The Mounts”