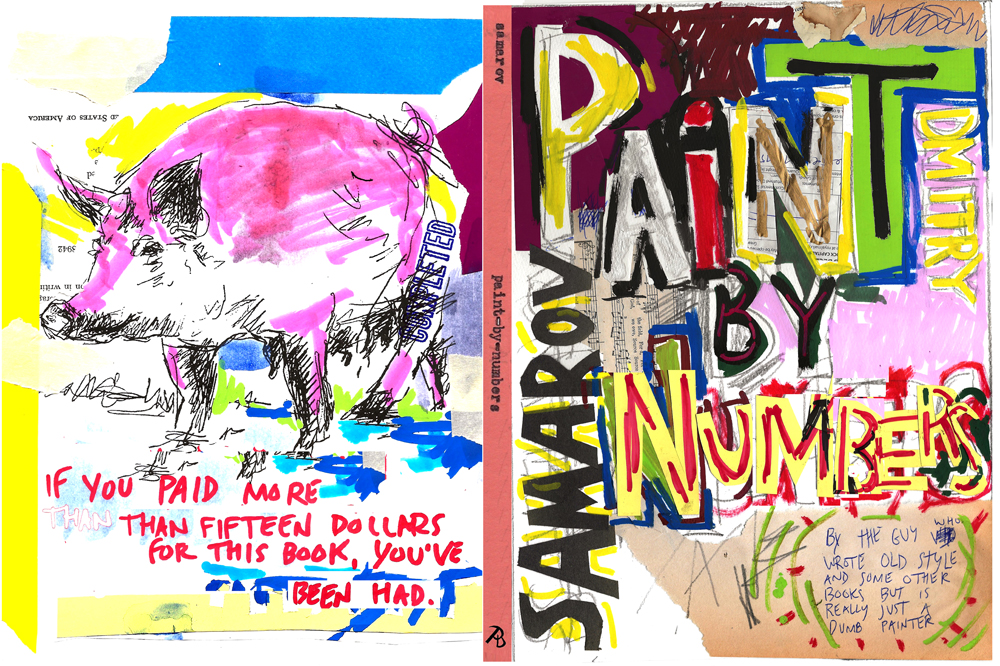 An Excerpt from paint-by-numbers

An email from the Museum of Only Art Now asking if I’d be interested in giving their artist-in-residence a tour of Chicago seems like a prank. I’ve spent years talking trash about MOAN and MOAN has had little curiosity about my work and even less curiosity about my opinion of them. It’s a reasonable arrangement. A sort of mutually-agreed-upon and reciprocated indifference.

So what do they want me for now?

An intern explains that M Tee (the artist-in- residence) wants to see the Chicago beyond the Magnificent Mile, the real Chicago. They thought of me because I’d been a cabdriver in town for years. In fact, I think they thought I still drove a cab. Maybe they thought a tour of the city in a cab would appeal to Tee? Fit in with her work somehow? In any case, this is too odd a proposal for me to refuse. I agree but tell the intern I no longer drive a cab. They offer to rent a vehicle, so we’re on.

As the date of the tour approaches, I try to get some clue as to what is expected of me. I google Tee to get some idea of what her work is like without getting any definite impression. She seems to do all sorts of things and there’s a lot of heavy-duty language attached to a lot of it. I do learn that she’s from the Eastern Bloc, but currently lives in England. Perhaps immigration can be a point of connection for us. I keep asking the intern, but get no definitive answers. The tour route is up to me.

I pick up Tee and curator Walther Stroelphraege at the side of MOAN’s hulking edifice. I blast the A/C to combat the unseasonably hot afternoon. They’re relieved as they climb in. I ask Tee where she wants to go and she says it’s up to me, so I head west toward Humboldt Park.

My plan is to show them a bit of the Emerald Necklace, the system of parks and boulevards planned in the late 1800s by Olmsted. It’s one of the first urban green space plans and lays across many Chicago neighborhoods. We pass below the Paseo Boricua gates on Division and on into Humboldt Park. I take the boulevard north to show off the lagoon and fieldhouse. By the statue of Humboldt himself, they decide to park and walk around a bit.Tee wants to know why his statue is here. Alexander Von Humboldt never set foot in Chicago but because the area used to have a large German population a local booster installed it as a symbol of ethnic pride. They take a bunch of pictures around the statue.

Stroelphraege and Tee discuss various upcoming exhibitions and projects. They’ve been working together for some time. The thing about the art world—or much of any kind of world, for that matter—is that it really is about who you know. I’ve been making art for forty years, yet what they’re talking about may as well be quantum mechanics or sharecropping for how little it relates to what I do. I try to find out how they’ll be using our little trip for their work but never find out.

We drive south through Garfield Park, past its gorgeous Spanish Revival fieldhouse, on into Lawndale. I want to show them the Sears Tower. Not the one now called Willis, but the original one on Homan, near Roosevelt Road. This was once the center of Sears & Roebuck’s vast empire, the place from which thousands and thousands of catalogs were distributed all over the country to fill the minds of the populace with aspirational dreams. Now the grounds are quiet, occupied partially by city and county agencies of various types, and the tower itself stands alone, traces of once-attached structures visible on its southern wall. We walk right up to it and peer into the dimly-lit lobby. There’s a security desk within, but few signs of life. Stroelphraege mentions Detroit.

The word Detroit is enough to summon a flood of images and ideas, most of them negative. For a certain kind of artist, there’s an attraction or romance to ruin and decay. Elevating falling-apart and failure is a kind of fetish with them. I don’t know whether this is the case with Tee and Stroelphraege, but it isn’t my intent to lead them on a misery safari.

Our next stop is the massive complex of criminal courts and jail facilities around 26th and California. I tell them that “Going to California” in Chicago has nothing to do with catching some sun. We make a loop south on California Ave, then west on 31st Street, north on Kedzie, and east on 26th Street. This is the main drag of Little Village, the largest Mexican neighborhood in the city and as lively as the area around the jail is ominous. Jarring contrasts are a huge part of this city. There’s some talk about the evils of America as we leave the area and head toward Hyde Park. We’re looking for a place to stop for a snack and Stroelphraege suggests a coffee shop at 63rd and Woodlawn, downstairs from his apartment.

A couple hours in I still have no firm feeling about the purpose of our trip. There’s some talk of making a comedy set in the Chicago art world; maybe they’re auditioning me for a part. Who knows.

I point the car toward Pullman. George Pullman built his strange quasi-utopian worker’s village here and provided many Blacks a chance out of poverty and second- class citizenship.

What’s left is a mixture of dilapidated ruin and neat, cared-for row housing. It’s a place where Chicago’s past, present, and future intersect. There have been plans to revive the area for years and there are indications in the neighborhood that maybe it’ll finally happen. Tee and Stroelphraege remark upon how nice and calm it is here. Most of Chicago’s “bad” neighborhoods are filled with people just living their lives day to day. It’s not as sensational a picture as drug-war shoot outs, deep-dish pizza, or Al Capone, but it’s the city I know and love.

Our last stop is Calumet Fisheries, on the southeastern tip of the city. Of all the places I take them they like this place best. They take dozens of pictures of the bridges and industrial edifices visible in every direction. They eat breaded shrimp on the picnic table outside the fish shack and thank me for taking them around.

We take South Chicago north, then Jeffrey, and on to Lake Shore Drive back downtown. As we pull up to MOAN’s side entrance, Stroelphraege asks how often I visit the museum and is surprised to hear I haven’t been inside in years.