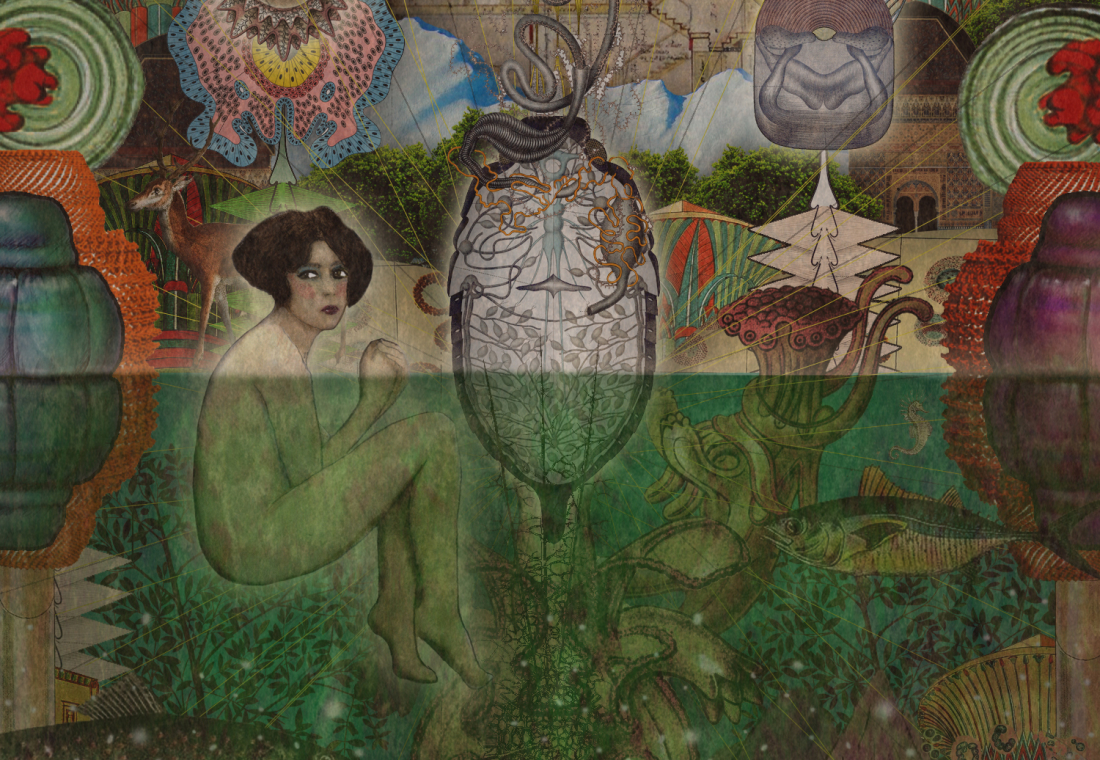 Alone in rooms they dwindled.

They had met online. Skinny inclinations had drawn them together. Young girls, aching to be thin, they connected.

Bony fingers clattered at keyboards as they converged in forums to discuss excess fat.

They did not know each other’s names, were easily concealed behind avatars and handles.

The forums they frequented did not bend exactly to their needs. They splintered. Together they set up an anonymous blog. This digital nook became their sanctuary. A five strong sorority thrived.

Online, adolescent insecurities were magnified, exposed to global peer pressure.  Fussing over physiques was a viral disease. Beneath the line, images were deconstructed, every inch sifted for flaws. The whole world sat in judgement.

Away from the world, uniting in silence, they rebranded disorders as lifestyle choices.

Of a generation of elective skeletons, they forged ahead with their voluntary attenuations.

For each of them, life had become an assessment of packaging, a ranking of fats and calories. Nutritional information became a second language, was reeled off catechistically. Nothing passed their lips without prerequisite calculations.

They traded tricks to hide weight loss from doctors.

Their clothes, ghostly, floated about them.

Worshipping emaciated saints, macrobiotic martyrs, they placed the undernourished on pedestals. Such role models were not hard to find; advertising rattled with the xylophone boned.

They shared pictures of painfully thin women, pipe-cleaner poster girls who barely cast shadows, used them as motivation to lose ever more weight: one day you too could look this unhealthy.

Glossy magazines were brim with the paper-thin. Whittled digitally, photoshopped models were stripped of extraneous flesh, the unsightly shaved indiscriminately. Icons carved ever thinner they were left with bodies that would topple in the real world, living Giacomettis.

Ideals retreated from Rubens, the fully-fleshed no longer fashionable.

They embraced the eroticisation of the skeletal.

Clicking through links, they discovered an artist’s portfolio. Intrigued by body dysmorphia, he created grotesque distortions, manipulated pixels to create impossible extremes. In his images, his disproportioned women posed sad-eyed: elongated and painful. Bearing witness to these stickthin victims, they drooled whatever saliva they could muster.

His images, they cut and pasted for inspiration.

Within their clique they would see who could lose the most weight. They would update their physical status, a competitive edge brought to starving themselves to death.

In isolated cells, they went on hunger strike.

Nothing tastes as good as skinny feels, declared their cult’s catalyst.

Each generation was free to choose its idols.

Ignoring hunger pangs, they subsisted on the minimum.

In place of meals, some of them ate juice soaked cotton wool balls.

When they had the energy, they took photographs, stripped to snap withered figures. Envy gnawed away at each of their circle in turn as they viewed snapshots of matchstick limbed friends.

They shared stories of their distress at seeing others eat. Not just the obese sucking gloop from Styrofoam, all ingestion became painful to watch. Watching others, they tasted phantom mouthfuls. They were always the ghost at the banquet.

They bandied tips for shrinking quicker, on how to rid their systems of inadvertent ingestions. Disjointed they moved like marionettes, girls taken apart and put back together haphazardly. Families winced at the brittle rhythms of their walks.

Emaciated and stricken, their figures mirrored those that emerged from serial killer’s lairs, the listless spindles who haunted hospice wards.

You look amazing, they would tell each other.

Through screens, they looked down across the famished landscapes of their bodies, Between hips, bikinis bridged, slinky links between protrusions.

Skin sunk to the bone, this was how they knew each other.

If I can’t be the pretty one, I want to be the skinny one. So went another morsel of wisdom.

However they rejected the few solids they let slip, the bathroom was the centre of their world, a mirrored abyss that became the site of both funfair reflections and efforts to redress them. They looked at all angles for error and engorgement. Turned sideways, barely visible, they saw flesh where others saw only bone. Hunkered over bowls they purged.

Scarcely troubling three dimensions, they fretted over silhouettes. They woke from nightmares feeling bloated and sick. Nauseous, they retched air.

Thinning to non-existence, reduced to infrastructure, they wore lightly the results of synchronised slimming; their diet plan became an incremental suicide pact.

They watched each other waste away in real time.

In self-portraits, they held pieces of paper upon which they wrote their decreasing weights. Personalized countdowns to zero. In mirrors, flashes obliterated reflected faces. They engaged in below the neck assessments, uploaded pictures of headless skeletons, Harryhausen extras. They would not recognise each other in the real world.

They knew not the sound of each other’s voices.

[5] She was the first of the group to disappear permanently.

Her family, distraught, knew nothing of her internet activities. Her posts would go unnoted. In the suburbs, within the embrace of a loving family, she had died of malnutrition.

The rest of the group took her radio silence as a sign of disinterest. Perhaps she was ashamed that she was putting on weight. Dead, she nonetheless fattened through absence.

Embalmers faced with the task of presenting her to loved ones, struggled with an urge to plump her up, a posthumous repast. It would be manifestly what she would not have wanted.

With her death, their number thinned.

She was the first of the vanished girls.

She had spent her summer holidays in retreat, made flimsy excuses to avoid company. Each time they saw her she had lost even more weight. Always slight she seemed increasingly insubstantial.

Where would it end?

They held candles at the crematorium.

[3] Her boyfriend had ribbed her, made snide jibes about puppy fat. He hadn’t been serious. Nevertheless, he watched anxiously as weight dropped off. He loved less and less of her. Gripping her as she slept, his fingertips slipped into dips between ribs. He grew unsettled by her emaciated form.

He apologised in her eulogy.

[2] Adhering strictly to a death-camp diet plan, she reached her goal weight.

By the time they zipped the body bag, lifted her into the ambulance, she weighed little more than she had at four years old.

[1] She logged on, left messages, posted photographs. There was no response. Had they deserted her? She pictured them gossiping about her. Perhaps she no longer met their ideals.

She redoubled her efforts.

She would show them.

Shrinking into herself, she breathed her last.

She was the last of the featherweight corpses to be removed from a loving home.

Stuart Snelson is a novelist and short story writer. Twice-nominated for the Pushcart Prize, his stories have appeared in 3:AM, Ambit, HOAX, Liars’ League NY, Lighthouse, The Londonist, Structo and Wyvern Lit, among others. He lives in London where he is currently working on his second novel.