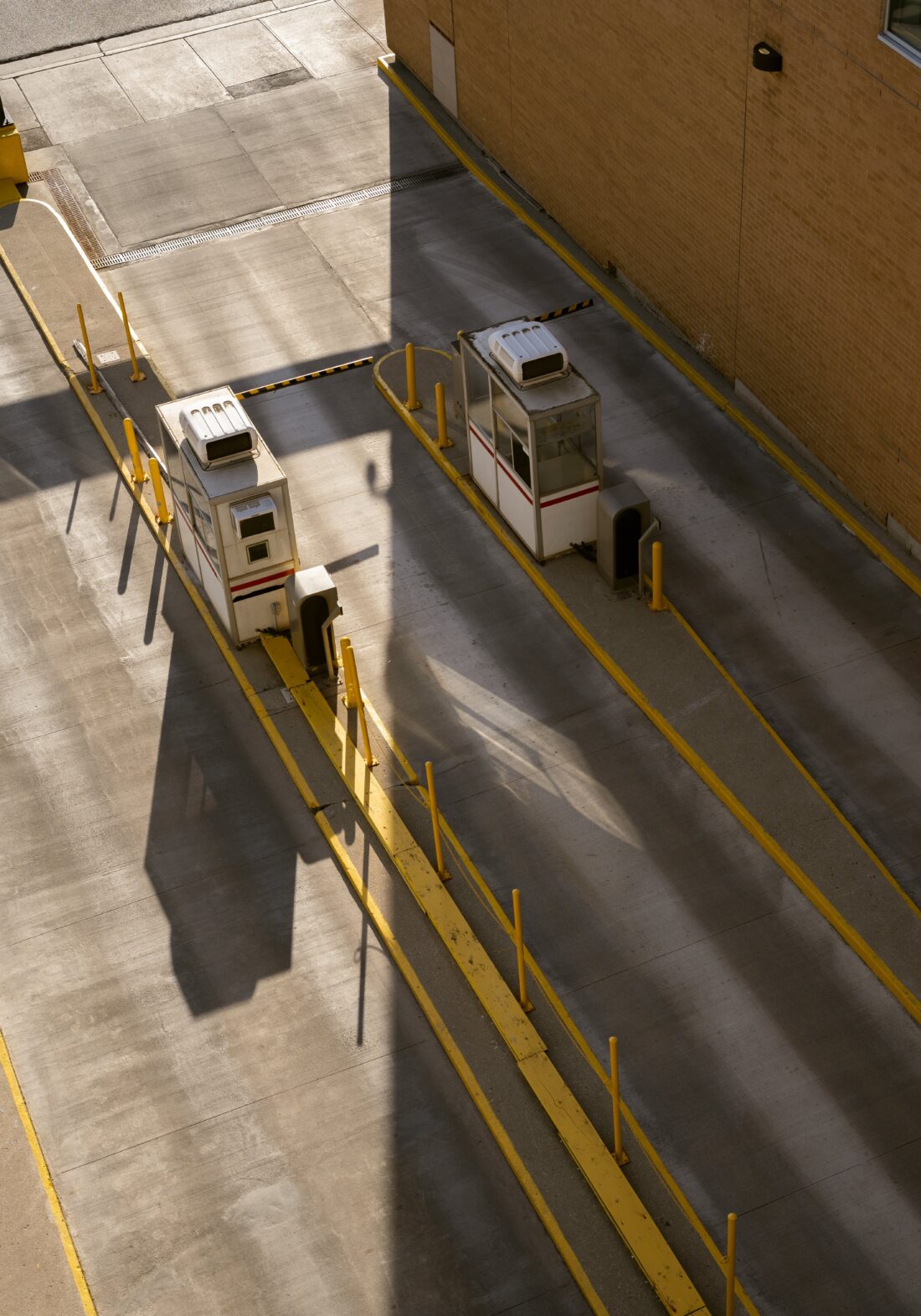 I was stopped short at a tollbooth at an indiscriminate distance between where I was fleeing and where I was going. The man in the stall slid the glass open sideways and alerted me to a fare. He launched his gaze at me like he had some agency. Eyes double-bubbled out from his head and the lids peeled back, puffy and fatigued. He spoke words that sounded like chewing.

I offered a paper bill from colonial days, embossed in elegant cursive of some slogan that once meant something but was now merely enigmatic.

“I have not seen one of those certificates,” he said, “since the industry prevailed.”

“Whatever you can spare of yourself.” His tongue made acrobatic turns inside his mouth that seemed impossible, physics-wise.

We stared at each other, stalematish and pitying of the other until at last he disappeared behind the glass and light and prism of the tollbooth and produced for me an array of tools. Pliers and scissors gleaming under government wattage. A finger saw and a thimble slice. Oblong extractors and two identical pairs of splicer fragmenters. I was no surgeon, but bent on pressing forward, I accepted the tools.

“For a new life,” he said. “In this segment year we’ve collected requisite organs. We are in need of bone.”

I considered the options. Weighed what I needed and what I could do without and how badly I needed to get to where I was going and by when. Ultimately, I decided on a forearm, femur, a tooth, and one of the smaller bones of my right inner ear, all of which, I calculated, was well worth my passage.

The procedure was excruciating, and part way through the self-excisement, the toll-booth man offered a sedative, at no additional fee, that allowed me to see the functions through without too much pain. I finished unsleeving my bones of what I was willing to give and successfully offered up the committed parts to his care with the assistance terry cloth, a cauterizing wand, and a few sheets of high-percentage alcohol wipes.

In exchange of a minimally bloodied offering, I was awarded with a notarized certificate by the industry state – as he was ordained to that high office – and was promised significant milestone updates of the future life to which I had contributed.

I passed through the tollbooth with no further difficulty, and over the next sixty segment years, I was kept notified of developments. Here is what I learned:

The life came to know itself sometime after I had arrived where I was going. It was a male baby named Mervvvvj, and he quickly progressed through the appropriate channels. In his adolescence he was awarded certain prestigious trophies by the academy for ingenious paint work on the city’s underbridges. Afterward, he abandoned a career of arts and took to law, then politics. Among the most well-known of his achievements is his successful labor organization of a fleet of sentient spacecraft commissioned by fleshy admirals from a nearby system I had heard of but had no significant opinion about.

Later, when I was more pressed on in my ailments and cared for by consecrated health stewards, I was updated on a major turn of events: that during a conflict between street artists and technology governance capitalists, my child was obliterated. It happened in public and caught on analog film. The film was initially distributed by way of an independent micro-press, but bottom-leaning parties received and digitally retransmitted it so widely that the universal public could do nothing but recognize and give homage.

Now, at the state invalidage where my sojourn has ended, I watch the retransmission daily though an ocular bandage. My optics have degenerated a negative twelve degrees, but I can see my boy Mervvvvj’s strong femur, his forearm capacity. I feel myself in him, even at this distance.

Righteous pride can make even the deepest sadness of loss a redeemed thing. I am so sad, you would not believe it. I cry every time I watch it. I cry until something inside dries out. But above that, hovering over my non-haloed head is something approaching recognition. Progeny. A beaming lovely thing. Shimmering and proud. My bones. My god. My boy.